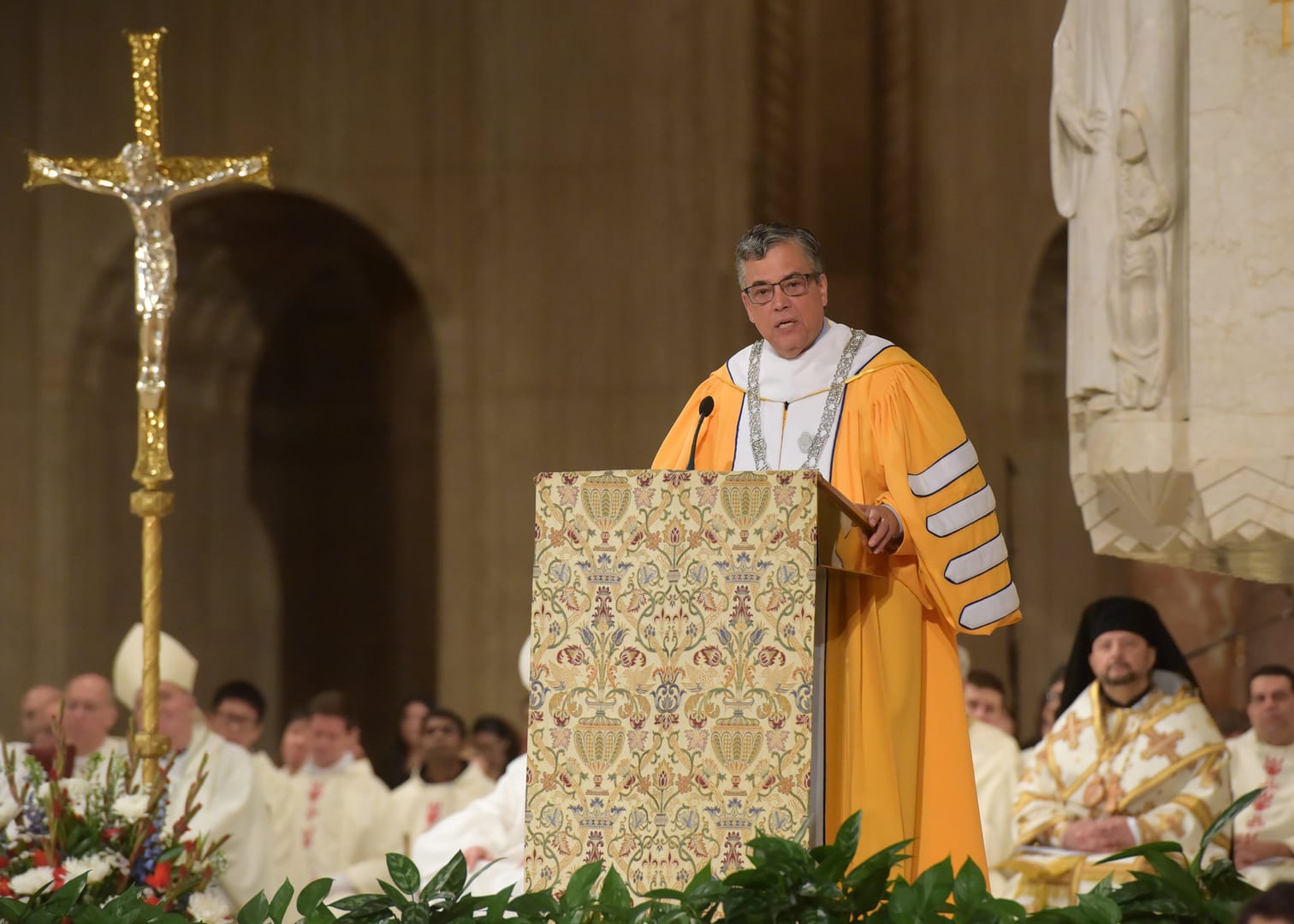 WASHINGTON, D.C. — In a dramatic ceremony, Peter K. Kilpatrick was installed as the 16th president of The Catholic University of America, emphasizing the school’s Catholic identity and pledging to work to help it become the nation’s “premier Catholic research university.”

His installation Nov. 11 came during a Mass at the Basilica of the National Shrine of the Immaculate Conception celebrated by Cardinal Wilton D. Gregory, who as Washington’s archbishop serves as the university’s chancellor.

“Loving God and loving our neighbor should be a guidepost for us here at The Catholic University of America,” Kilpatrick said in his installation address, adding that “learning to love requires that we allow God to fashion new hearts in us.”

The national university of the U.S. Catholic Church was founded in Washington by the U.S. bishops and chartered by Pope Leo XIII in 1887.

Thousands of students and other members of the university community packed the basilica for the two-hour Mass, which opened with an academic procession with dozens of faculty members processing down the center aisle wearing colorful robes as the university’s Symphony Orchestra played one of Mozart’s classical works.

Kilpatrick, who was appointed president in March and took office July 1, had earlier served as provost and senior vice president for academic affairs at the Illinois Institute of Technology. He also was a professor and dean of engineering at the University of Notre Dame. He holds a doctorate in chemical engineering from the University of Minnesota.

The new president is the author of more than 100 journal articles, the recipient of numerous teaching and research awards, and he holds or shares 12 patents.

“I should note that I only came to this university because I felt called to do so,” he told attendees. “I was not actively seeking to be a president anywhere else, but I felt impelled to come to Catholic University because of the convergence of my interest in higher education and my deep and abiding Catholic faith.”

Kilpatrick, who became Catholic as an adult, praised his wife, Nancy, who he said “really taught me how to love by showing me the meaning of devoting her life in sacrificial service to others.”

The couple has four adult children and four grandchildren, and Nancy Kilpatrick and their grandchildren carried the offertory gifts during the Mass.

In his homily, Cardinal Gregory praised Kilpatrick as a “wise and faithful man” and said “he will build on the legacy of excellence that is already the established heritage of this university and propel us into a brighter future.”

The installation was part of a Votive Mass of the Blessed Virgin Mary, Seat of Wisdom, and Cardinal Gregory in his homily reflected on wisdom, saying it “eventually comes with insight and experience. It comes as a grace from God himself.”

The cardinal noted how Mary in Luke’s Gospel listened carefully and pondered the things she heard, and she willingly accepted God’s will.

“We turn to her as the seat of wisdom for our university and its new president, Dr. Kilpatrick. May she accompany him throughout the entire tenure of his service, assisting him each day and always reveal for him the divine wisdom that comes from God alone,” Cardinal Gregory said.

In his address, Kilpatrick noted that Pope Leo approved the institution’s founding 135 years ago with the mandate to “‘provide the church with worthy ministers for the salvation of souls … and to give to the (American) republic her best citizens.’

“I stand here today committed to making good on that promise,” Kilpatrick said.

During the installation, Kilpatrick made a profession of faith, leading the congregation in reciting the Creed, and then recited an oath of fidelity to the Catholic Church and its teachings.

Kilpatrick was presented with symbols of his office, including an academic mace, or scepter, and a presidential medallion and chain placed around his neck.

The new president noted how the school’s mission statement emphasizes advancing the dialogue between faith and reason.

“The very core of who we are and what our mission is rests in this vital dialogue between our belief in God and what our reason and logic teach us,” he said. “This dialogue is a gift the world needs, perhaps now more than ever, as we witness great confusion in our society and culture about the very nature of the human person.”

Kilpatrick added that Catholic University also has “a more important mission to show love to each other, concretely through our acts of listening to each other, of serving each other and of giving ourselves to each other, even in the midst of the intellectual pursuits of a university.”

“Today we are far too small to be such a comprehensive university, and we must grow,” he said. “Within 10 years, we should be a university of 10,000 undergraduate and graduate students. At this size, we can be the vibrant university that we are called to be, and I am committed to helping to lead us there.”

Kilpatrick said the university will need the full support of its alumni, trustees, donors, faculty and staff to help it to thrive and reach its goals.

“Working together, we will secure our destiny as the premier Catholic research university in our country,” he said. “I am certain that with your help and prayers, our university’s greatest days lie ahead.”

Zimmermann is editor of the Catholic Standard, newspaper of the Archdiocese of Washington.