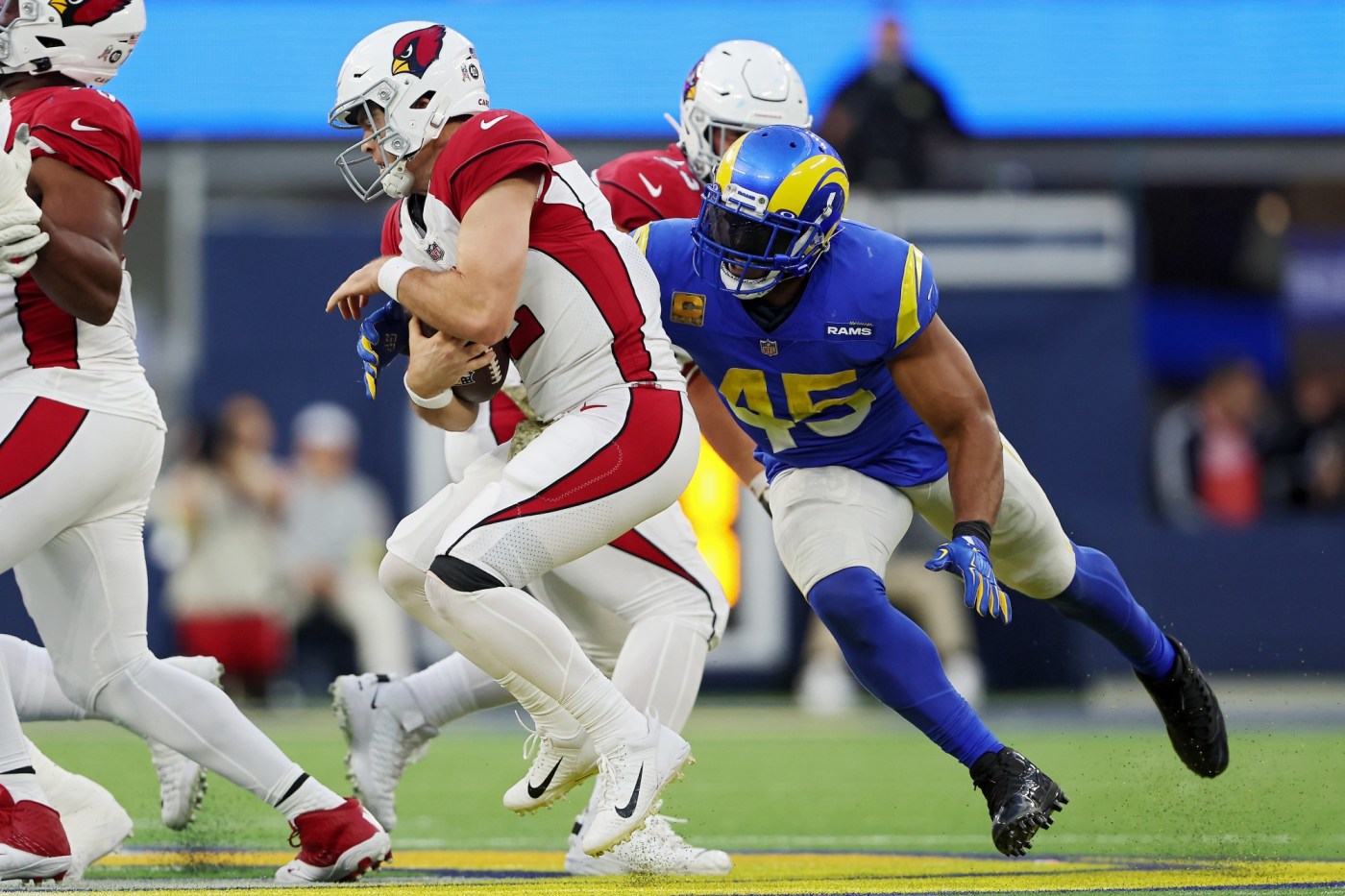 Here’s what we learned, what we heard and what comes next after the Rams’ 27-17 loss to the Arizona Cardinals on Sunday, which gave them a 3-6 record and daunting odds to make the postseason with eight games left in the regular season:

Wagner’s mood quickly changed to a serious one after being informed that outside linebacker Terrell Lewis said he’s not used to losing because he played at college powerhouse Alabama and went to the postseason during his first two NFL seasons with the Rams.

Wagner’s Utah State teams had a combined record of 11-25 during his first three seasons before ending his senior season with a 7-6 record and a trip to the Famous Idaho Potato Bowl.

Wagner knows losing and he’s very familiar with winning as a former Super Bowl champion with the Seattle Seahawks, where Wagner built a Hall-of-Fame worthy career in 10 seasons.

The Ontario native returned to Southern California to win another Super Bowl with the Rams, but the organization also jumped at the opportunity to sign Wagner this past offseason because of his strong leadership qualities. The defending Super Bowl champions are leaning on Wagner amid this losing season.

Lewis said he spoke to Wagner after the loss to the Cardinals and Wagner recommended him the self-help book “Chop Wood Carry Water: How to Fall In Love With the Process of Becoming Great.”

“Just gotta enjoy the process of it,” Lewis said. “Enjoy the seasonal waves of, like, you go through ups and downs. You gotta keep sharpening your tools throughout the process, keep building off what you can learn, continue to chop wood, carry water, do the little things.

“I told him (Wagner) in the weight room (Monday morning), ‘I appreciate you always being in here. You never look for shortcuts, you’re always present, you’re always just doing all the little things. … Bobby is one of those guys, he showed me the truth, as a leader. He goes through everything. You appreciate being able to cross paths with people like that.”

Wagner is known for being mild-mannered, but he knows how to get his point across and he’s going to remind his teammates they have choices for the final eight regular-season games.

“It’s a choice,” Wagner said. “So, that is my job as one of the eldest is you have a choice, so they will be reminded for sure.”

Rams wide receiver Van Jefferson also mentioned playing for pride, being professional and “letting the chips fall where they fall” for the rest of the season.

Jefferson was proud of his teammates’ efforts in producing a touchdown drive toward the end of the lopsided game, one that ended with Jefferson grabbing a 3-yard touchdown with seven seconds left in regulation.

It’s not a garbage-time touchdown to Jefferson, because to him, it was a confidence builder and the reward of overcoming two knee rehabs in a six-month span.

Jefferson, who missed the first six games of the season, said he gave the touchdown ball to his father, Shawn Jefferson, the assistant head coach of the Cardinals. Van Jefferson had to make sure it was OK with quarterback John Wolford because that was his first career touchdown throw.

“For me to get in the end zone and for it to be against my dad, too, at the same time, it was great,” Jefferson said. “Even though we lost the game, of course we wanted to win, but for me, just personally, to have that. … You know I always have confidence in myself, but just to get that back and be like, ‘All right, Van, you’ve done this before, you’re here now. … Just keep going.’”

Jefferson didn’t play for most of the first three quarters because the Rams opted to utilize Ben Skowronek as the third starting receiver and part-time fullback against the Cardinals.

Jefferson said he was given a heads up about the decision and was able to process and be a professional about it. He was patient and made the most of his opportunities after Cooper Kupp left the game in the fourth quarter with an ankle injury.

Rams coach Sean McVay didn’t speak to reporters Monday because of a family responsibility. A team update on Kupp’s ankle will likely come from McVay on Tuesday.

According to multiple reports, Kupp avoided a serious long-term injury, but he might miss Sunday’s road game against the New Orleans Saints.

“Cooper is a pivotal part to our offense,” Jefferson said. “We love Coop and he does a lot for us in our offense and it sucks to see him go down just because of what he means to us and what he means to this organization and the people in this locker room. … If we are without him, we just gotta step up for him and make the plays.”

Today24.pro
Billionaire investor Howard Marks touts a bargain boom as interest-rate fears grip markets - and predicts a surge in companies going bankrupt ‘How many Uber drivers does it take to pick up a disabled person?’: Disabled person says 3 Uber drivers canceled on them because of their service dog One of The Greatest Britons in History - Joe Calzaghe I make $1,000 a month by promoting Amazon products on social media. It only takes 5 hours per week — here's how I set up my side hustle.