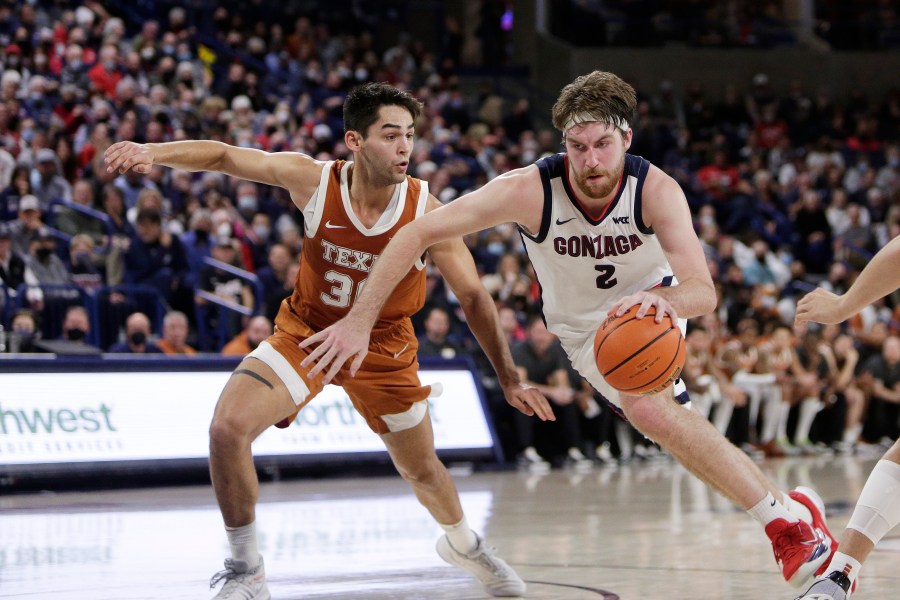 The No. 11 Texas Longhorns host the No. 2 Gonzaga Bulldogs in a high-profile matchup between programs expected to make March Madness runs, and it's a litmus test for each squad to see where they stand against quality opponents.

MORE THAN THE SCORE: Stay up to date on sports stories like these, and sign up for our More than the Score sports newsletter at kxan.com/newsletters

The Bulldogs are coming off one of basketball's most unique experiences — playing on an aircraft carrier's deck. They topped Michigan State 64-63 on Nov. 11 playing on the USS Abraham Lincoln at the North Island Naval Air Station in San Diego, California in the 2022 Armed Forces Classic, erasing a 12-point deficit in the second half to win.

Gonzaga has one of the best players in the country, 6-foot-10 forward Drew Timme, along with a big dynamic guard in 6-foot-7 Julian Strawther and a host of shooters and great on-ball defenders. Last season in Spokane, it was a top-5 matchup when No. 1 Gonzaga beat No. 5 Texas 86-74.

After the Longhorns beat Houston Christian 82-31 Nov. 10 at Moody Center, head coach Chris Beard addressed questions about Gonzaga and said while he wished his team played better then, he's excited for the opportunity in Austin.

Longhorns open their new home with win over UTEP

It's a late tip-off, 8:30 p.m. CT, and Beard said that's not his preference but "the game warrants national television," he said. The game is broadcast on ESPN2.

Games like this between elite-level programs in a nonconference setting have become more common in recent years, and coaches are embracing them not just for the potential of a big win to impress the NCAA tournament selection committee in March, but for the chance to get better in order to make a deep tournament run.

"The way I see these games, we don't lose these games. We either win them or we run out of time," Beard said. "It's too big of an opportunity for us to get better. We'll try to win on the scoreboard, too, but that's easy to talk about. Gonzaga is really, really good and we'll have to play really well to beat them this time of year."

Texas freshman forward Dillon Mitchell is one of the players who could draw a defensive assignment against Timme, one of the country's most efficient post players. Timme is averaging 22 points per game over Gonzaga's first two games of the season, but Mitchell said he's not the only guy to worry about.

"We have to study his game and the whole team," Mitchell said. "We've got to be tough and physical and play our defense."

Timme scored a career-high 37 points against the Longhorns last year on 15-of-19 shooting with seven rebounds and three assists. Rasir Bolton, another returner for the Bulldogs, chipped in 16 points.

Today24.pro
In the age of megachurches, communion has become a big business Hans Niemann in the sole lead at the 3rd El Llobregat Open The Darkest Secret and Tragedy of Edwin Valero Why the power grid is an 'attractive target' for domestic terrorists: report