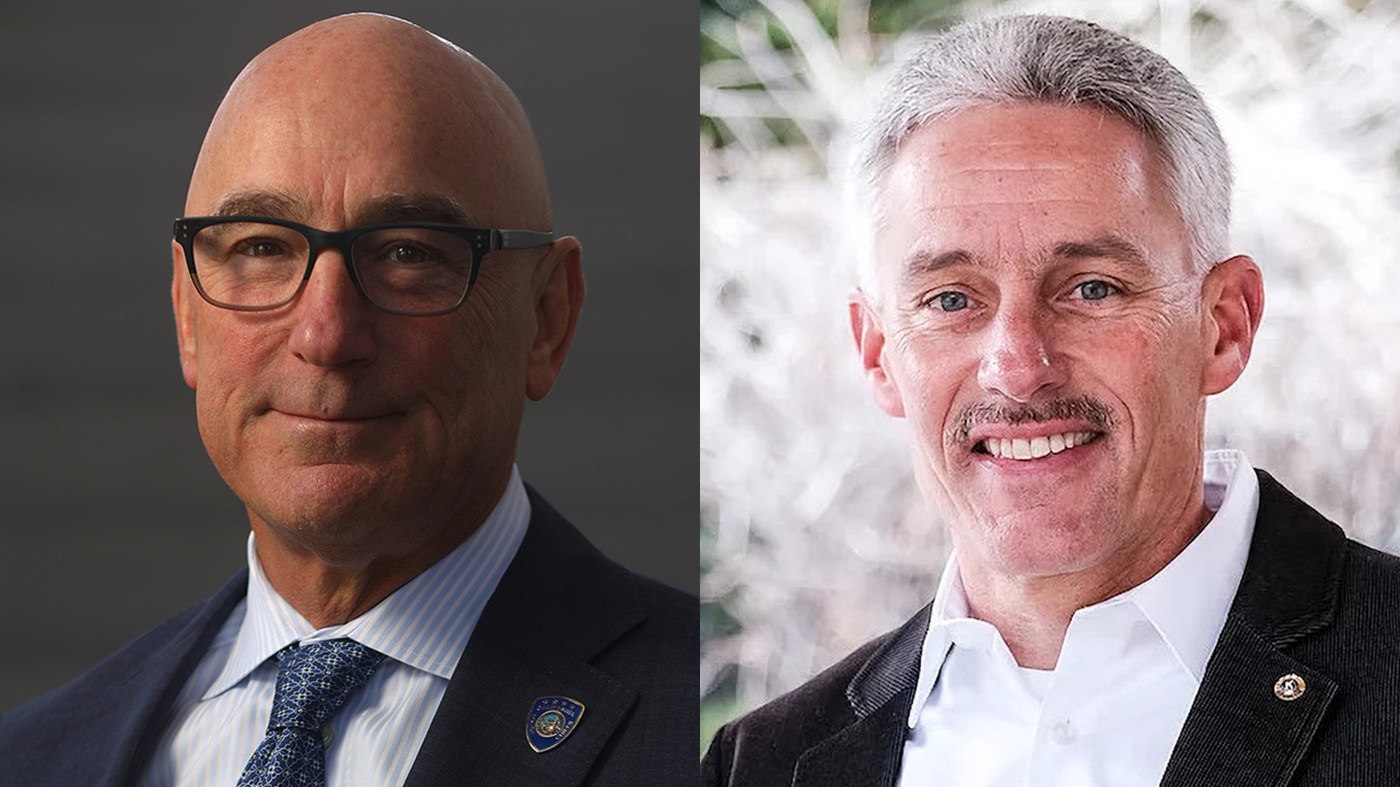 SAN JOSE — Robert “Bob” Jonsen is still holding on to a slight edge in the race to become the first new Santa Clara County sheriff of the millennium, with the former Palo Alto police chief holding a 7,600-vote lead after seven days of counting.

Retired sheriff’s captain Kevin Jensen is gaining on him, but he is running out of time to make up the rest of that ground.

Since Election Day, Jonsen has fared ahead of Jensen, who ran for the office in 2014 and had strong institutional and law-enforcement support as well as a massive fundraising advantage. Jonsen’s initial lead of 5 points shrank to 3 and then to 2.6 over the next two days, but the erosion slowed, with Jensen gaining 0.3 points between Thursday and Sunday.

The registrar’s vote tally released Monday afternoon, which reflects 79% of the projected total votes cast in the Nov. 8 election, showed Jensen gaining another 0.3 points in a single day.

Still, Jensen would have to make significant strides by the end of counting to overtake Jonsen. Mail-in ballots comprise more than 90% of the vote so far, and to date, Jonsen has a 3.4-point edge on those ballots.

The two are vying to succeed outgoing six-term sheriff Laurie Smith, who opted against running for a seventh term then abruptly resigned Oct. 31 in an apparent attempt to render her civil corruption trial moot, though she was found guilty of corruption and misconduct counts anyway.

Even though she stepped down, Smith could still be formally removed from office by the Superior Court as soon as Wednesday, when she appears in court for the equivalent of a sentencing hearing. Smith had already announced that she would retire in January, citing political scrutiny and the looming trial based on a county Civil Grand Jury corruption investigation.

In light of all that, the Board of Supervisors on Tuesday is expected to consider bypassing the typical process of taking applications and appointing an interiff officeholder — Undersheriff Ken Binder is currently acting sheriff — and instead immediately appoint the sheriff-elect. Such an appointment, however, would be based on an unofficial status, since the registrar has until Dec. 8 to certify the election results.

Jonsen, who had a surprise showing as the lead vote-getter in the June primary, ran on a platform of bringing in a needed outsider perspective to a sheriff’s office plagued by scandal and long-standing accusations of mismanagement that included but was not limited to the operation of the county jails. Before his stint as Palo Alto police chief — and as chief of Menlo Park before that — he cited his nearly three decades in the Los Angeles County Sheriff’s Department as his bona fides for having the literacy to step in as the South Bay’s sheriff.

Jensen, the sheriff’s captain, positioned himself as a longtime critic of Smith who had the institutional know-how to install reforms much more rapidly than his opponent could. He received the majority of regional and union law enforcement support, including the two deputy unions in the sheriff’s office that contributed over $300,000 to a political action committee backing him. All told, Jensen’s campaign donors and the PAC support gathered more than $700,000, which dwarfed Jonsen’s campaign by seven times.

With the way that Smith’s administration ended, civil rights groups like Silicon Valley De-Bug are calling attention to the considerable amount of work her successor has to do to instill reforms — particularly in the jails, which are under two federal consent decrees to improve in-custody conditions — and create confidence in the agency’s strained relationship with a recently established civilian auditor.

“The grand jury’s guilty verdict of Laurie Smith should be another point of evidence that the long standing claims of misconduct by the sheriff’s office were validated,” reads a De-Bug statement. “When history reflects back on this moment, it will understand Laurie Smith as a symptom of the system of incarceration. And for our county to be solution-based, we must interrogate, dismantle, and move away from this problematic system.”

Check back later for updates to this story.

The Apple Car project has hit some roadblocks

Today24.pro
The Darkest Secret and Tragedy of Edwin Valero Why the power grid is an 'attractive target' for domestic terrorists: report Anthony Joshua returns to America in search of new coach ahead of boxing return and links up with trainer Virgil Hunter Hans Niemann in the sole lead at the 3rd El Llobregat Open