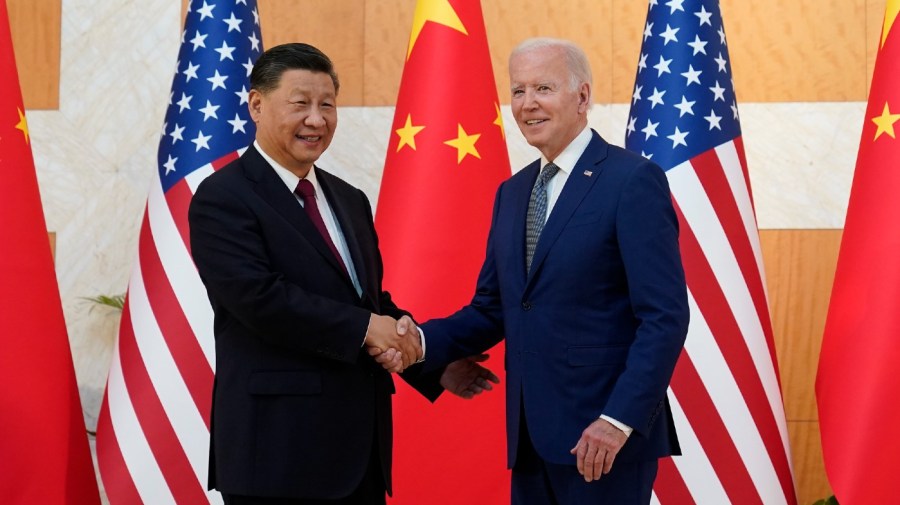 A White House pool TV producer was knocked off balance and pushed by a man wearing a white mask with the Chinese flag on it as she asked President Biden whether he would talk about human rights in his upcoming meeting with Chinese President Xi Jinping in Indonesia.

The man “instantly” moved to yank the producer “backwards by the backpack,” causing her to lose balance, according to a Monday pool report from AFP’s Sebastian Smith.

The producer, who had asked her question as press were being ushered from the room, was then pushed toward the door, but two White House staff members stepped in to say she should be left alone, according to the report.

NBC News identified the producer as ABC News’s Molly Nagle. In a separate pool report shared by the network, Nagle added that the man, “a member of the Chinese group,” also shouted at her as she was pulled backward.

The Hill has reached out to ABC News for more.

Biden met with Xi on the sidelines of the Group of 20 summit in Bali, Indonesia, the first face-to-face meeting between the two world leaders.

The pair were expected to discuss key topics in the U.S.-China relationship, including recent tensions over Taiwan, global challenges to addressing climate change and human rights concerns.

The U.S. was among 50 countries in the United Nations General Assembly to express concern about the Chinese government's treatment of Uyghurs and other predominantly Muslim minorities in Xinjiang, China.

The United Nations High Commissioner for Human Rights found that Beijing's actions against in Xinjiang may constitute "crimes against humanity."

Exclusive: Newcastle were among three clubs targeting World Cup star back in the summer transfer window

Today24.pro
Why the power grid is an 'attractive target' for domestic terrorists: report The Darkest Secret and Tragedy of Edwin Valero In the age of megachurches, communion has become a big business Anthony Joshua returns to America in search of new coach ahead of boxing return and links up with trainer Virgil Hunter