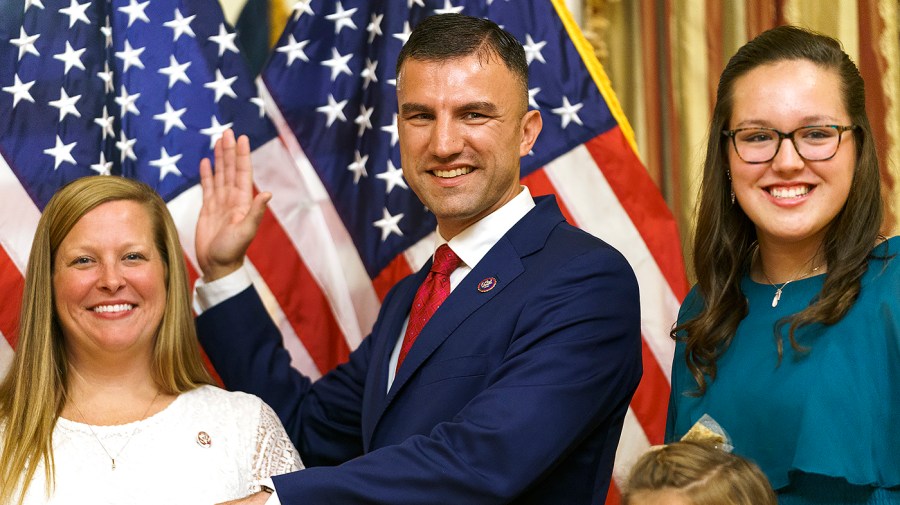 Rep. Rudy Yakym (R-Ind.) was sworn into office on Monday to replace the late-Rep. Jackie Walorski (R-Ind.) in the House after she died in a car accident over the summer.

Yakym, a businessman, bested Democrat Paul Steury and Libertarian William Henry to serve out the remainder of Walorski’s term in Indiana’s 2nd congressional district. The victory also secured him the opportunity to serve his own term representing the district starting in January.

Yakym secured 64.6 percent of the vote, followed by Steury with 32.4 percent and Henry at three percent. The Indiana Republican Party chose him to be the GOP nominee to replace Walorski in August. He was among a number of candidates seeking the position.

With Yakym sworn in, the balance of power in the House for the remainder of the current Congress is a slight Democratic majority, 220-213. Two seats remain vacant.

Speaker Nancy Pelosi (D-Calif.) issued the oath of office to Yakym on the House floor Monday, surrounded by members of the Indiana congressional delegation. The chamber erupted in applause when he completed the oath.

Walorski, along with two of her aides, died in a car accident in Indiana on Aug. 3. Yakym worked as the finance director of the late-congresswoman’s congressional campaign in 2012.

In his first remarks on the House floor, the new congressman spoke about his predecessor.

“First, I want to acknowledge the late-congresswoman Jackie Walorski,” Yakym said. “Jackie delivered results for the district, and she had the utmost respect of her colleagues in the room.”

“As her successor, I will work every day to honor her memory and uphold her impeccable work ethic,” he added.

“To the Hoosiers who have placed their trust in me to best represent them in this House, the People’s House, thank you. I ask for your continued prayer for wisdom as we work to make our nation a more perfect union,” he said, before making a call for unity.

“Yes, there are real policy issues that need to be addressed, like our massive deficit and 40-year high inflation rates. But just as importantly, our country needs unity, and it starts right here,” he added.

Today24.pro
New Honda Civic Type R review: Is it really better? EASY chili recipe for dinner #food How to deal with rejection How to Fall Asleep in 60 Seconds (OR LESS)