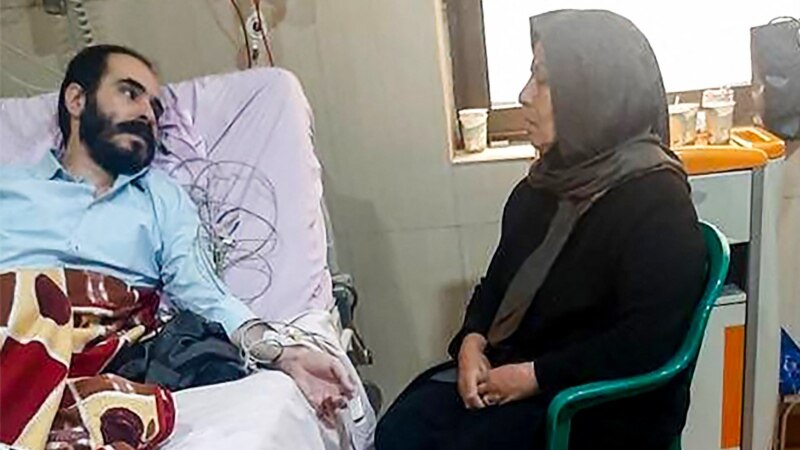 A well-known Iranian Azeri blogger and activist who was hospitalized over the weekend was in stable condition, Iran officials said Monday, although his family and the international community are concerned. Hossein Ronaghi, who was arrested September 24, is one of dozens of prominent rights activists, journalists and lawyers who have been arrested amid Iran's crackdown on protests that were ignited by the death of Mahsa Amini. Amini, a 22-year-old Iranian of Kurdish origin, died September 16 after she had been detained by the country's so-called morality police for not following the nation's strict dress code. Ronaghi, who was taken to Evin prison after his arrest, has been on a hunger strike for more than 50 days. His family said his health is a concern as he has a kidney condition, and his brother Hassan Ronaghi said on Twitter that both of Hossein Ronaghi's legs had been broken in prison. However, judiciary news agency Mizan said, "Ronaghi will soon be discharged from his hospital and his health is fine." It said all claims that his legs were broken are false, according to Reuters. Hassan Ronaghi tweeted on Monday a picture published by the judiciary of Hossein Ronaghi in a hospital bed. He also confirmed that his parents had visited Hossein Ronaghi Monday afternoon and told him Hossein Ronaghi's "general condition is good." Officials transferred Hossein Ronaghi to Dey Hospital in Tehran on Sunday after he began refusing water on Saturday. Iran's judiciary officials did not provide details about why he was receiving medical care or the charges against him. Hossein Ronaghi, 37, a Wall Street Journal contributor, has been one of the most fearless critics of the Islamic republic still living in the country, AFP said. In a video recorded before he was arrested, Hossein Ronaghi said many people were ready to give their life for Iran "and I am one of those people." He also said Iranians want to have an "ordinary" life like other people around the world. Hossein Ronaghi's family and the international community voiced its concern over social media about his well-being. On Monday, Hassan Ronaghi on Twitter asked people in Tehran to "please encircle" Dey Hospital "so they cannot transfer Hossein outside the hospital" and harm him. Videos on social media also showed groups of Iranians marching near Dey Hospital, chanting "Hossein Ronaghi." Other reports said authorities used tear gas to disperse the protesters. VOA Persian could not independently verify the videos.   U.S. national security adviser Jake Sullivan said on Monday that the "torture and mistreatment of political prisoners like Mr. Ronaghi must cease." Mahmood Amiry-Moghaddam, director of the Norway-based nongovernmental organization Iran Human Rights, said Supreme Leader Ayatollah Ali Khamenei and Iran's leadership were responsible for Ronaghi's health. Iran Human Rights said, as of Saturday, Iranian forces had killed at least 326 people since the protests began two months ago. That figure includes 43 children and 25 women, the group added, saying that its published number represented an "absolute minimum." Iranian authorities say more than 40 security forces were also killed in the nationwide unrest. The protests, which at first focused on ending Iran's law requiring that women wear a headscarf, or hijab, have since transformed into one of the biggest challenges to the ruling clerics since the 1979 Islamic Revolution. Hossein Ghazanfari contributed to this article. Some information for this article came from Agence France-Presse, Reuters and The Associated Press.

Today24.pro
In the age of megachurches, communion has become a big business Hans Niemann in the sole lead at the 3rd El Llobregat Open The Darkest Secret and Tragedy of Edwin Valero Best Android app 2022 – Google reveals top pick for the year and it’s totally free