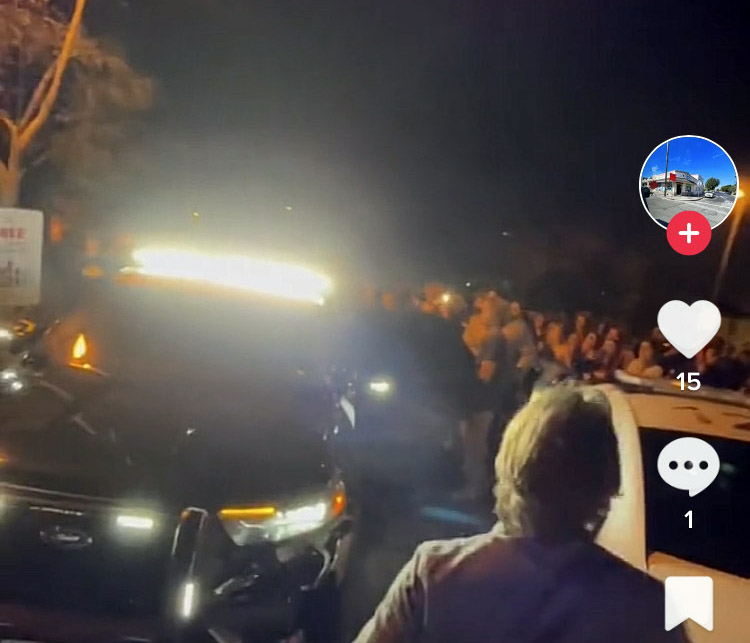 One thing I never wanted to do when my kids were teens was go out of town. I knew what to expect — parties.

And so I never did. Then one year all sorts of health stuff started happening to my parents and I found myself flying back and forth to Florida, where they lived, every few weeks. Sure enough, there was a party at my house even though my boys were supposed to be at their dad’s house. Things were missing, things were broken, trust was compromised. I was pissed.

So I wasn’t surprised when a party of more than 100 teens in Mill Valley more than a week ago got out of hand and spilled out into the streets — well, the CVS parking lot, the nearby Safeway and the not-so-nearby In-N-Out. There was drinking and most likely drugs, the police showed up, sheriffs showed up and things got ugly.

According to a statement by the Mill Valley police, “the crowd was moving in and out of CVS and throwing cans and bottles at officers in the area. As officers attempted to safely disperse the crowd, juveniles began jumping on a police car, throwing additional items and surrounding police vehicles.”

A sheriff’s deputy was injured after being hit in the head by a can of beer. Employees at CVS and Safeway — minimum-wage workers — were bullied.

Although the teen who organized the party was cited under the city’s social host ordinance, they were released to their parents. “There will be more arrests moving forward,” City Manager Todd Cusimano told the council.

And now parents are having come to Jesus moments with their kids. Maybe.

I will never forget a bullying incident at my kids’ middle school. The principal gathered parents in the aftermath of a beating that had occurred near the campus. It was a few days before Halloween and she urged parents to hold our kids accountable for their actions, maybe even deny them a night of trick-or-treating. Yet, there were the bullies, out on the street on Halloween night.

Not to always blame parents. I knew the parents. They were nice people. And yet.

I was a teen once. It was a long time ago, alas, but I remember the stupid things my friends and I did. I also remember that we hid those stupid things from our parents. Teens don’t have fully developed frontal cortexes but we were smart enough to know the hell we’d get if we got caught. My parents were from the Silent Generation — they didn’t have experience with the kind of drinking and drugs their teens were indulging in. Many parents of their generation called the police themselves if their teen was caught doing something illegal. A night in jail can be a valuable lesson.

But I’m a Boomer, and I fully expected that my kids were going to experiment no matter how much I admonished them not to.

Still, I can’t recall any of my friends’ parents serving booze at a party when I was a teen or turning a blind eye to the cases of beer being carried into their home. I do, however, recall the many times I was about to drop off my own kids to a friend’s house, saw the booze being carried in — yes, the parents were home, social host ordinances be damned — and turned around and headed back home.

“They’re going to drink anyway; at least I can keep an eye on them if they do it at home,” more than one parent told me.

Of course my kid hated me that night and for many nights after that. Being hated is part of parenting a teen.

I am not condoning teen drinking and drug taking, especially since many of their parents do the same — youths watch us carefully. But the violence is inexcusable and needs to be dealt with harshly. True, it was just a few teens but the ones who stood by and did nothing to stop it are complicit.

There has been a lot of handwringing in the party’s aftermath. There was a well-attended gathering at the community center last week with parents and community leaders questioning, how, why? There’s a well-intentioned call out for parents who raised teens here years ago to meet with parents of teens today to share advice. I raised teens here but I have no advice I can offer. I didn’t raise them through a pandemic; with social media, smartphones and influencers; where they live in fear of being shot in their school or at a concert or at the mall; where someone like Kyle Rittenhouse can shoot three people, two fatally, and get off scot free and even be celebrated by the GOP, law enforcement and our former president; where a mob stormed our Capitol carrying a Confederate flag with the intent to murder; where a former president can lie, commit fraud, talk about grabbing women by their you know what and suffer no consequences; where police can kneel on a Black man’s neck for nearly nine minutes, murdering him; where parents will willingly cheat to get their teen into a college they just aren’t smart enough to get into.

My boys did their share of stupid things. They did not, however, get violent or harass anyone.

The teens who destroyed property and hurt people are holding up a mirror to Marin. I sure hope we’re willing to take a long hard look at it.

Plumbers, plasterers and builders making more than £1,000 a week amid skills shortage

Today24.pro
How to Fall Asleep in 60 Seconds (OR LESS) How to deal with rejection EASY chili recipe for dinner #food New Honda Civic Type R review: Is it really better?