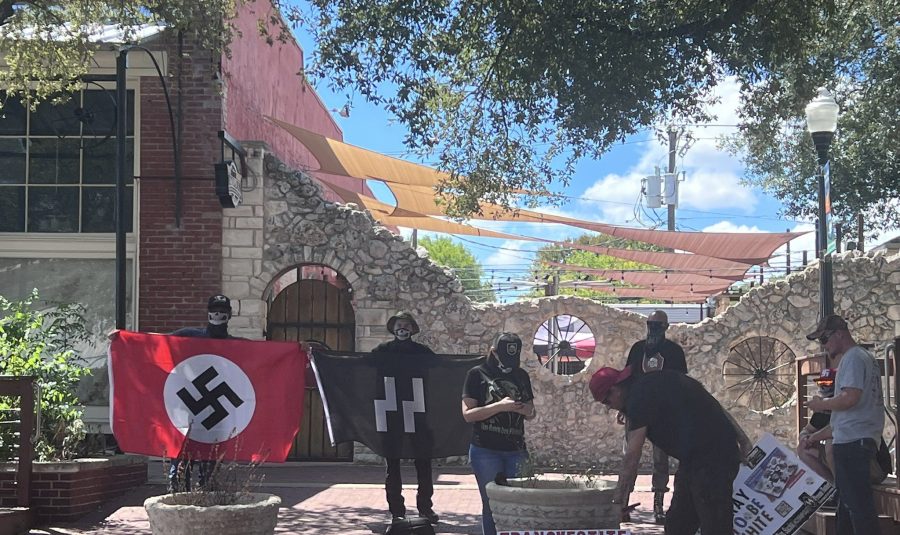 PFLUGERVILLE, Texas (KXAN) — A photo provided to KXAN showed a group of people with a Nazi flag and transphobic signs, protesting outside of a drag brunch at Hanover's Draft Haus in Pflugerville this last weekend.

After seeing some posts on social media, the bar's owner contacted Veterans for Equality (V4E), a Texas-based group of U.S. military veterans, to provide security at the event, Gen Pena, one of the group's founders, said.

KXAN has reached out to Hanover's Draft Haus. This story will be updated with a response.

Pena said that they are glad that the bar reached out to them.

"When we first started, it was a lot of religious folks coming out [against LGBT events]. But I've never really seen anything towards drag until it started becoming a political issue," Pena said. "The neo-Nazis that we saw this past weekend, we've never seen those before. "

Pena said they counted seven protesters across the street from Hanover's, with Nazi flags and signs with transphobic and white supremacist messages. Most of the people wore masks with skull designs. The group yelled and played music from a speaker, which Pena describes as "intense and vulgar."

"Frankly, I didn't know that they existed around Central Texas and it was quite shocking when I saw them. So it's definitely intensifying," Pena said. "I believe that it has to do with how the LGBT community and the drag aspect are being targeted."

V4E brought out six veterans on Sunday, with a mix of military experiences. Some had been medics, others served in frontline combat. Pena, along with their brother Mac Pena, created V4E after participating in protests for transgender and women's rights at the Texas State Capitol.

After those protests, the group worked with Pflugerville Pride and smaller local events for security. The group grew as they continued their service, with other veterans reaching out to the group on Facebook and TikTok.

"I think what helps out a lot of the veterans in why they feel they want to be a part of it is with everything going on in this world right now," said Gen, "We feel like people's rights are being stripped away. Trans rights, LGBT rights, women's rights, BIPOC rights, everybody's rights are being stripped away little by little. As veterans, we swore that oath to always protect, it doesn't expire when we get out."