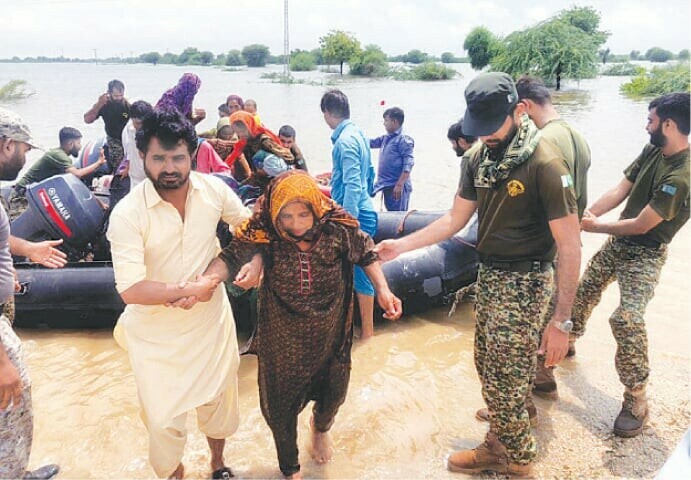 The Economic Coordination Committee (ECC) on Wednesday approved the allocation of an additional Rs10 billion to the National Disaster Management Authority (NDMA) for the procurement of relief items for flood-affected people across the country.

Catastrophic floods triggered by torrential rains this year have wreaked havoc in Pakistan rendering nearly 33 million people homeless. Nearly 1,600 people have lost their lives since mid-June, while thousands have been injured.

In the ECC meeting today, presided by Finance Minister Miftah Ismail, the NDMA apprised the participants of the devastation caused by the floods and presented a summary for the allocation of funds for procurement and logistics of relief items.

It said that in order to provide immediate relief to the flood affectees, NDMA had commenced procurement on an emergency basis which cost Rs2.4 billion.

Due to colossal damages, the already procured items were not sufficient viz-a-viz relief requirements in the flood-affected areas, it stated, adding that the authority had, therefore, placed orders for more items at a cumulative cost of Rs7.113 billion.

Previously, the NDMA was allocated Rs8 billion for the purpose. However, it said that the amount was insufficient as the cost of procurement has surpassed Rs9.5 billion.

Besides procurement, NDMA said it was also undertaking logistics of all relief goods and materials provided by friendly countries.

Foregoing in view, the ECC approved the allocation of Rs10 billion to the NDMA. It also directed the Finance Division to immediately release Rs5 billion to the authority.

Separately, a summary proposing the exemption of custom duty and additional custom duty on active pharmaceutical ingredients (APIs) was also presented in the meeting. However, the committee, while rejecting the summary, directed the ministry to submit a fresh summary to rationalise the price of paracetamol to ensure its availability.

The ECC also approved a proposal presented by the Ministry of Commerce regarding the clearance of stuck-up consignments. It said that the consignments of previously banned items that landed in Pakistan till August 18, 2022, may be released after imposing of surcharge.

Meanwhile, the summary presented by the Ministry of National Food Security and Research regarding the import of wheat through the Gwadar seaport was deferred.

Today24.pro
Sweet Potato Souffl How to Get MICROSOFT OFFICE for FREE in 2022! Tavern-Style Pizza The Cooking Show The Sandman Johanna Constantine Coat