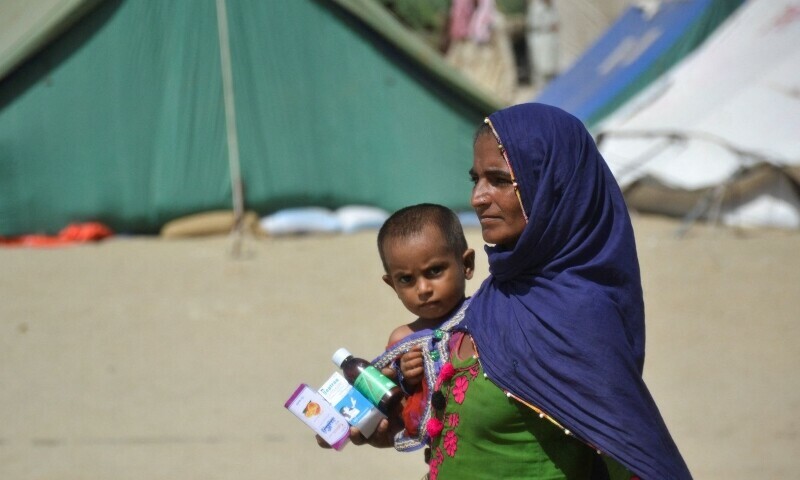 As more than 78,000 patients showed up in health camps in the flood-hit areas of Sindh in the past 24 hours, disease outbreaks continue to be a worry in the province, where six more died of gastroenteritis and other illnesses.

According to the provincial health department, two died of gastroenteritis, two of pyrexia of unknown origin (PUO) — a condition in which a person has a temperature accompanied by more than three weeks of illness — and one each of myocardial infarction and cardiopulmonary arrest.

The department said in a daily situation report on Wednesday that various diseases had claimed 324 lives in the province since July 1.

Sindh, where floodwaters descending from the country’s north and hill torrents from Balochistan have converged to give rise to a health crisis, has seen thousands displaced by deluges and now being inflicted by various diseases, mainly water-borne.

With Pakistan’s already weak health system and lack of support, displaced families have complained of being forced to drink and cook with disease-ridden water.

“We know it can sicken us, but what to do, we have to drink it to stay alive,” flood victim Ghulam Rasool told local Geo News TV as he stood near where his home was washed away in southern Pakistan.

According to the health department report, 14,619 diarrheal disease cases, 15,227 cases of skin-related diseases, 9,201 of suspected malaria, 665 confirmed malaria cases and 11 patients of dengue have been treated from the internally displaced persons in the province over the last 24 hours.

Separately, Dr Kareem Merani of Dadu Civil Hospital told Dawn.com that there had been an outbreak of malaria and gastroenteritis among the flood-hit population.

The surgeon said around 1,200 patients suffering from these diseases had been admitted to his hospital so far and the footfall at the facility’s out-patient department was approximately 5,000 a day.

Earlier, Moinuddin Siddique, director at the Abdullah Shah Institute of Health Sciences at Sehwan city, told Reuters that malaria and diarrhoea were spreading fast in the region. “We are overwhelmed,” he said.

“We need to work in a coordinated manner to respond to their immediate needs,” she said in a statement late Monday, prioritising clean drinking water. Health and nutrition stand out as the most important needs of the displaced population, she said.

Health department data show that over 2.7 million internally displaced persons have been treated for water-borne diseases in the province since July 1 while 1,082 health facilities have been damaged by floods.

The National Disaster Management Authority said on Wednesday that 10 flood-related deaths had been reported countrywide over the past 24 hours, taking the cumulative toll since mid-June to 1,569.

Record monsoon rains and glacial melt in Pakistan have triggered the flooding that has impacted nearly 33 million people, sweeping away homes, crops, bridges, roads and livestock in damages estimated at $30 billion.

While vast swathes of land remain inundated in Sindh, officials and reports have been saying that water levels have begun to recede in the province.

However, Sindh Information Minister Sharjeel Memon says it might take months to completely drain the water.

The water level had reduced in Kotri Barrage, while the teams of the irrigation department were also working on de-watering water elsewhere, however, it might take months to completely drain the water, he said during a press conference in Karachi on Wednesday.

“Low-lying areas can only be de-watered through pumping and it is a tough task to take machines to those areas, but the government is trying its best to do this,” he said.

Moreover, Dadu Assistant Commissioner Shahnawaz Merani said water was standing up to nine feet after receding by around three feet at Main Nara Valley Drain in the district.

Meanwhile, the Flood Forecasting Division website showed that the River Indus was witnessing a low-level flood at Kotri on Wednesday afternoon.

A delegation from the European Union visited villages in Khyber Pakhtunkhwa’s Nowshera and posted photographs of their interactions with officials and locals.

While addressing the press conference, Memon also said that the provincial government was providing meals to millions of people in Sindh on a daily basis.

“As many as 688,712 families have been given ration bags and the process is continuing. Similarly, around 737,572 litres of drinking water have been provided to flood-affected people,” he added.

In response to a question, Memon said the provincial government had set a wheat support price at Rs4,000. He added that the imported wheat cost the government Rs9,000, hence it was better for people to buy it locally instead of opting for an import.

He insisted that wheat was not a profitable crop, saying the government took all decisions to prevent the occurrence of a food crisis-like situation in the country.

PM calls for collective action to deal with climate change

Later, Prime Minister Shehbaz Sharif urged citizens to continue to make donations for flood-hit individuals and families and said in meetings with world leaders, he had called for collective action to deal with climate change.

The prime minister, who is in New York to attend the 77th session of the United Nations General Assembly, said in a video message that he had been informed about baby food shortage during a virtual meeting on the flood situation.

“I was told in the meeting that there is a shortage of baby food. Hence, I appeal to the affluent and especially to baby food manufacturers … to supply it to the NDMA, PDMA, armed forces or through any other means to flood-affected people,” the prime minister said, adding that such efforts would help ensure “satisfactory arrangements” for the provision of baby food among the flood-hit population.

Moreover, he said he had spoken about the devastation caused by floods in meetings he had held in New York earlier in the day and highlighted the economic difficulties the country had been facing as a result of the devastation.

On Tuesday, Planning and Development Minister Ahsan Iqbal, who is also the deputy chairperson of the National Flood Response and Coordination Centre, announced that a campaign would be launched for collecting two million packets of food for women and children affected by floods.

He said in a tweet that the campaign would be carried out in collaboration with university students.

“Two-thirds of the country has to support one-third of the population. Undoubtedly, the calamity of floods is huge but not bigger than the courage and determination of the Pakistani nation,” he added.

Meanwhile, Pakistan received the first consignment of aid from Russia today, according to a Radio Pakistan report.

The flight, which landed at the Jinnah International Airport in Karachi, consisted of relief goods such as flood items, tents and water-cleaning devices.

The consignment was received by Russian Consul General in Karachi Fedorov Andrey, Advisor to Chief Minister on Relief and Rehabilitation Rasool Bux Chandio and representatives of NDMA and the Ministry of Foreign Affairs.

Separately, the first flight of relief goods from Greece landed in the metropolis as well.

The consignment was received by Honorary Council of Greece in Pakistan Ayaz Mohammad Lakhani along with other representatives. Foreign Office Spokesperson Asim Iftikhar, in a statement, said: “Relief assistance from Greece is welcomed with warmth and gratitude.”

In a press release later in the day, Japan said it will extend the emergency grant aid of $7 million to Pakistan in response to the damages caused by the flood disaster.

“This Emergency Grand Aid will allow implementing of humanitarian assistance activities for those seriously affected by the flood disaster in different parts of Pakistan through multiple international organizations in areas such as food, shelter and non-food items, health and medical care, as well as water and sanitation,” it stated.

Wada Mitsuhiro, Ambassador of Japan to Pakistan, reaffirmed his commitment to support Pakistan, saying that the country considered it critical to extend its best support and stand available to the affected.

“As part of the ‘2022 Floods Response Plan’, we will extend our assistance, ensuring collective and coordinated actions to respond to the national emergency,” he added.