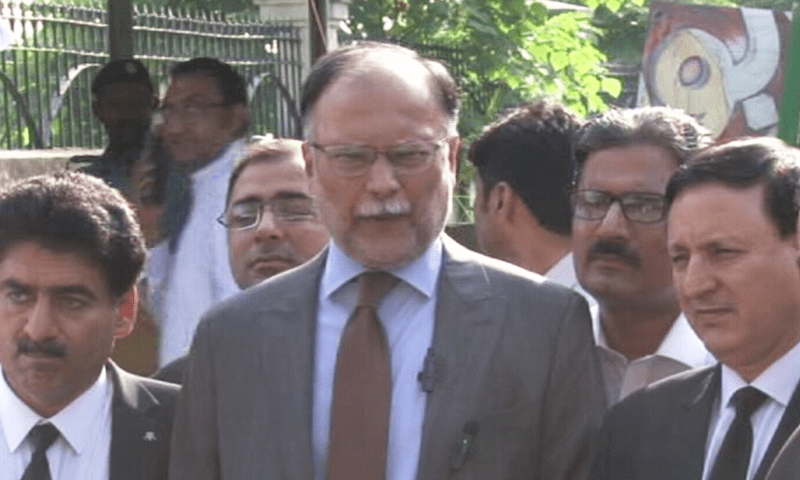 A two-member bench headed by IHC Chief Justice Athar Minallah delivered the verdict on an acquittal plea filed by Iqbal.

In the reference filed in November 2020, the National Accountability Bureau (NAB) had accused Iqbal of misusing authority by funding a provincial government project — Narowal Sports City — in his constituency and illegally increasing its scope from Rs34.75 million to Rs3 billion.

The project valuing Rs34.74m was approved by the Central Development Working Party (CDWP) when Iqbal headed it as the planning minister. However, it was shelved by the Pakistan Sports Board in 1999 on the directives of the planning ministry, which declared it “without requisite weightage with respect to economic necessity”.

The project was re-launched in 2009 when it was approved at a cost of Rs732m, but it was devolved to the Punjab government two years later after the introduction of the 18th Amendment.

Iqbal was arrested by NAB in December 2019 and remained in custody for two months.

He pleaded innocent to the charge, but NAB accused him of launching the project in his constituency by misusing his office as the planning and development minister during the PML-N government. He also faced the charge of escalating the project’s cost.

Alleging that NAB had filed the reference against him as part of the then-ruling PTI’s campaign to victimise political opponents, Iqbal had requested the high court to quash the reference.

‘Where is the corruption?’

At the outset of the hearing today, the court rejected NAB’s request to adjourn the case owing to its Additional Prosecutor General Jahanzeb Khan Bharwana’s absence.

The bench asked the NAB investigator to pinpoint where corruption had been committed in the case and when he was assigned the case.

The investigator said he was tasked with the case in 2018 and Iqbal’s arrest was made in 2019.

“The [NAB] chairman started the proceedings [based on the news] from an unknown newspaper. What is a CDWP (Central Development Working Party)? You have filed the reference without knowing what CDWP is,” Justice Minallah said, asking whether the statement of the secretary, who was a witness in the case, was even looked at.

He said that if NAB had halted the NSC project, then what was the reason for the rise in its costs. To this, the NAB official said that the watchdog had not stopped the project.

The court once again asked the NAB investigator to outline where the alleged corruption had taken place, to which the official said that Bharwana was to present his arguments but he was not present in the court.

“No, you will not get an adjournment,” Justice Minallah made it clear.

At one point, the NAB investigator said the case was being looked at in light of the recent amendments to the NAB ordinance.

“The amendment ordinance has nothing to do with it,” the IHC chief justice replied. “Your job was to look at corruption. You left corruption and got involved in other affairs.”

‘Who is responsible for the infamy and disrepute?’

At another point during the hearing, the NAB prosecutor present in the court said the NSC project became a provincial matter after the 18th Amendment and was handed over to the Ministry of Inter-Provincial Coordination.

Justice Minallah asked if Iqbal was the relevant minister at the time. When the NAB investigator confirmed that Iqbal was indeed the planning minister at that time, the IHC chief justice remarked: “So what authority did Ahsan Iqbal have that was misused?”

Justice Minallah said that it was not the job of the investigating officer to decide the policy regarding a project or whether Narowal was a big or small city and how many projects should be developed there.

“You have no idea how the government works. Please tell me any one allegation of corruption in it. If you talk about losses then [it was] you who stopped this project and caused a loss,” he reprimanded the watchdog’s representative, adding that it should have registered a case against itself instead.

Justice Minallah then inquired about the newspaper on the basis of which the case was registered. NAB officials identified the paper as Metrowatch.

The judge further inquired about the details of the newspaper, what its report stated, and instructed the official to read it out loud.

“Did the NAB chairman check the accuracy of the facts? A case of corruption related to a public welfare project was started on this basis?” the chief justice questioned.

The bench asked the watchdog’s officials to inform the court about the current status of the case, to which the NAB prosecutor made the request to look at the case in light of the current law.

Justice Minallah denied the request, saying that “we interpreted the previous law as well.”

“There were thirty people in CDWP, did they all commit corruption? You don’t know about CDWP nor PSDP (Public Sector Development Programme),” the judge said.

The investigating officer again requested for some time so that Bharwana could deliver his arguments but the chief justice remarked that enough time had already been given.

He asked who had stopped the project from 2000 to 2010, to which the investigating officer replied that it was a period of martial law.

“Then you should have caught them (the officials concerned at the time),” Justice Minallah noted, as he again asked why Iqbal was arrested.

“Was the case of corruption made only on the basis of this news? A capable officer Ahad Cheema was acquitted, but you kept him in jail for three years. Who is responsible for the infamy and disrepute you cause,” Justice Minallah inquired.

The judge said that instead of arresting Iqbal and others, the watchdog should have caught those who had stopped the project till 2009.

“Mr investigator you need a lot of training. This is how you play with people’s reputations. You have been asked about 15 times to tell about corruption. You stopped the project on the news of one Metrowatch?” Justice Minallah asked the NAB investigator.

Justice Minallah said that if the case was initiated on the basis of a Metrowatch report then why was the person responsible for restarting the project in 2009 not arrested, noting that Iqbal was not even a public officeholder at the time.

Subsequently, the court dismissed the case against Iqbal.

After the verdict was announced, Prime Minister Shehbaz Sharif hailed the court’s decision and said: “The integrity of a noble and honest person like Ahsan Iqbal was proved again with full force.”

He alleged that the case proved that at the behest of PTI Chairman Imran Khan, NAB had gone “to all lengths to implicate PML-N and its leaders in false cases and kept them in illegal detention”.

Meanwhile, talking to the media outside the IHC, Iqbal said that NAB was “forced to admit” there was no corruption allegation in the case after repeated prodding by the IHC.

“I want to tell Imran Khan to come and see what is the reality of your fake accusations.”

The planning minister thanked his friends, allies, supporters, voters and the media for their support.

He said the high court had repeatedly questioned about who would pay for the loss incurred by shutting the NSC project and announced that the project would be completed to turn it into a splendid modern sports facility for the youth and athletes.

“The recovery for additional expenses for its completion should be provided by NAB and Imran Khan because due to them this project was destroyed.”

He claimed that NAB had wasted taxpayers’ money to “turn lies into reality”.

Hertha and Hoffenheim draw in Berlin amid fan protests