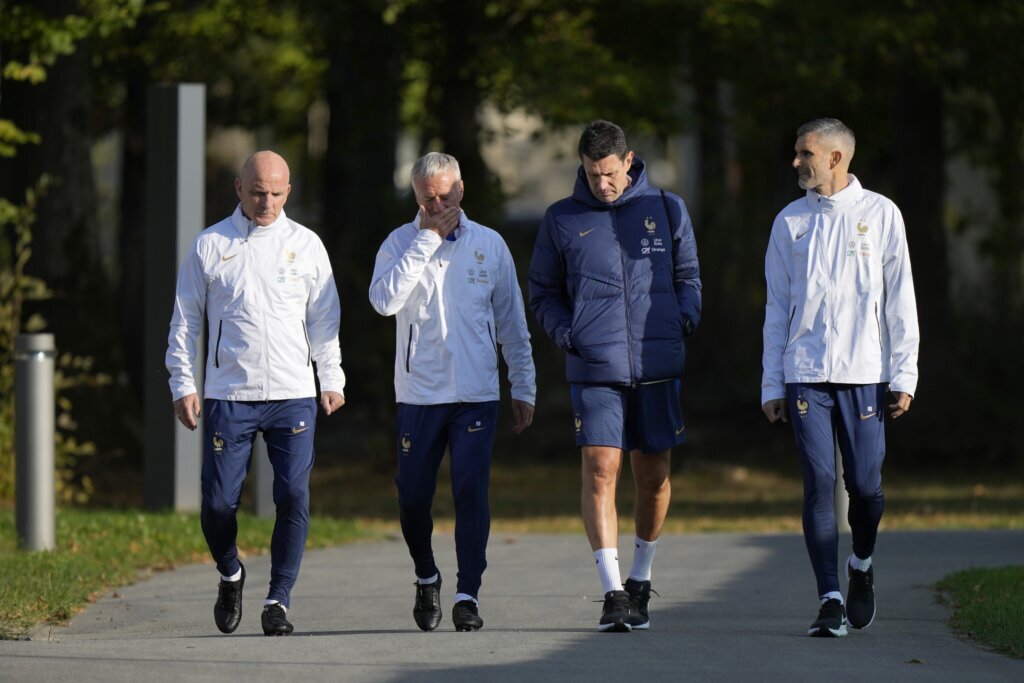 PARIS (AP) — France’s last competitive soccer games before the World Cup should be a chance for coach Didier Deschamps to test his best team.

But as France prepares to play Austria in the Nations League on Thursday, tension hangs over the defending champion because of ongoing issues off the field. They concern the French Football Federation president, an injured key player embroiled in an extortion scandal, and striker Kylian Mbappé’s row over image rights.

Oh, and there’s the threat of relegation to the second tier of the Nations League if titleholder France fails against Austria and Group 1 leader Denmark three days later.

It sounded like understatement when Deschamps said “it’s not the calmest atmosphere” when naming his squad last week.

Deschamps took charge in 2012, two years after France’s fiasco at the World Cup in South Africa, where players went on strike at training and embarrassed a watching nation back home.

The current situation is not as bad as that, nor as tense as when Benzema was discarded from the 2016 European Championship squad because of an alleged blackmail role in a sex-tape scandal involving then-teammate Mathieu Valbuena.

But Deschamps nonetheless had to deal with media fuss and distractions this week, after Mbappé said he’d boycott a photo session with his teammates in a dispute over image rights. Mbappé’s threat came after the federation had not amended the collective agreement governing rights for the national team before the World Cup.

Deschamps has also been fielding questions about Le Graët, with whom he has had a strong working relationship over the years.

Le Graët is facing claims of sexual harassment and the FFF is the target of an investigation ordered by France sports minister Amélie Oudéa-Castéra. After meeting with Le Graët last Friday, she announced an “audit and control mission” into the FFF to be carried out by the state inspection body in charge of sports.

The FFF itself is filing a defamation lawsuit against So Foot magazine, which reported this month that Le Graët allegedly harassed several female employees with inappropriate text messages.

Deschamps may well be very relieved when Thursday night’s match gets underway at Stade de France and he can focus on the field for a couple of hours rather than what’s happening off it.

Benzema’s minor thigh injury has led to Olivier Giroud’s recall and Giroud has a chance both to close in on Thierry Henry’s national scoring record of 51 goals and stake his claim for a place in the World Cup squad.

Giroud is on 48, and his presence could also be a blessing in disguise for Deschamps, who is lacking leaders in his squad with so many key players missing. Midfielder N’Golo Kante is another, though he is nursing a minor hamstring injury.

Giroud has become a huge club favorite at AC Milan after helping it win the Serie A last season and commands huge respect within France’s squad.

So it may not be a surprise if Giroud — who turns 36 this month — is in France’s squad for its opening World Cup match against Australia on Nov. 22.

The raft of injuries opens the door for fringe players to make an unexpected late push for a place in the World Cup squad.

Kolo Muani, a mobile forward with good technique, was so awe-struck about being called up that he even spoke about the thrill of simply taking part in training at Clairefontaine.

‘I don’t know how often those people come around’: Jason Heyward’s lasting impact with the Chicago Cubs goes beyond his numbers — and big contract

My daughter is barred from competing in school sports in 18 states. It's all solely because she's trans.