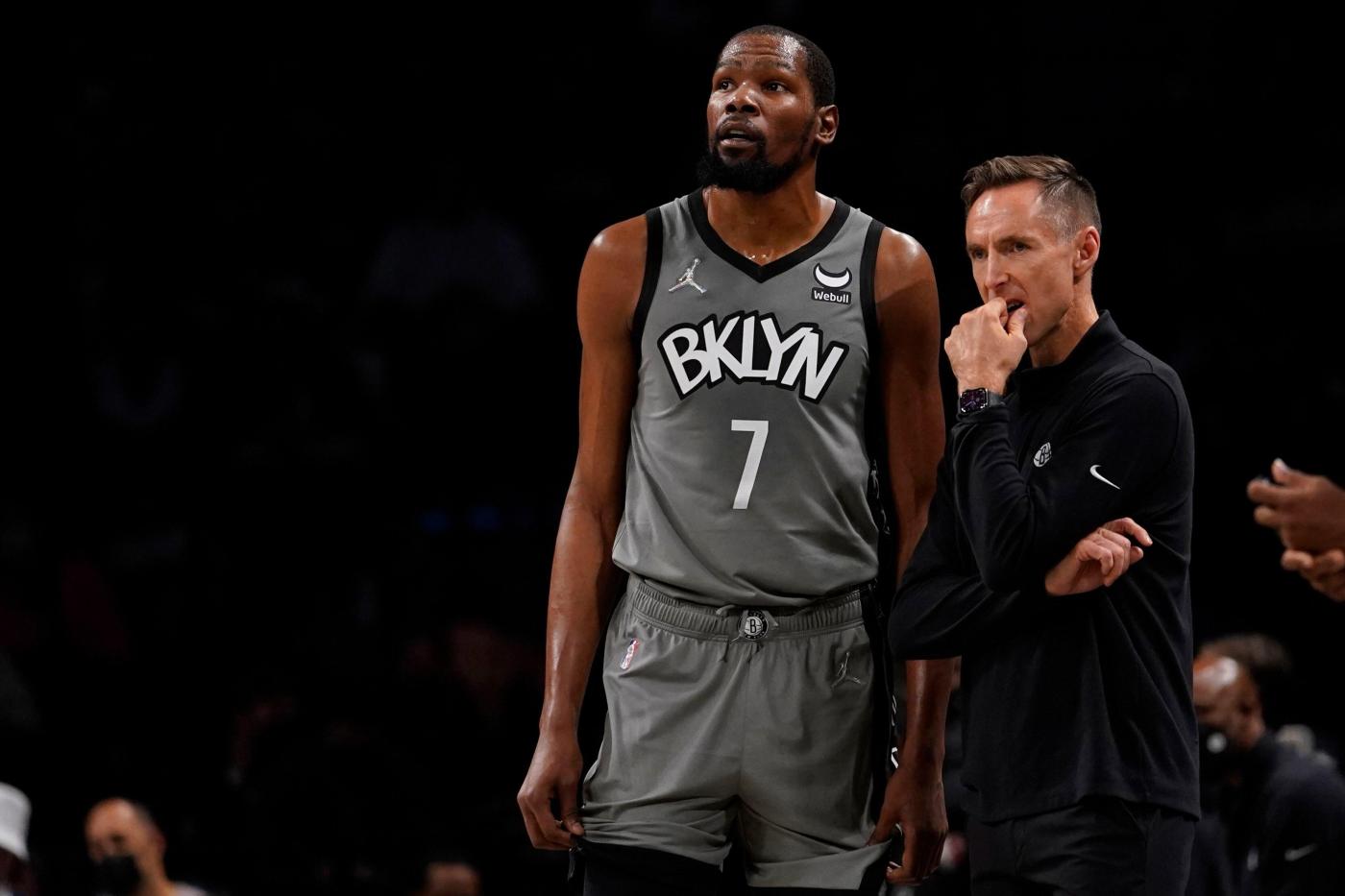 This isn’t the NFL. Not every team has a chance. Even the Jets won Sunday.

With that in mind, we present The Daily News’ NBA Power Rankings in category form:

They were so close last season and should only get better with Jayson Tatum and Jaylen Brown in the meat of their respective primes. Two concerns: 1) they’ve already lost Gallinari for the season because of an ACL tear and 2) we’re skeptical about relying further on 36-year-old Al Horford, who averaged over 35 minutes in the playoffs.

The defending champions are running it back with the same squad but a year older, which is concerning for a core that has been through the physical ringers of six Finals runs. Draymond Green’s health and deterioration is something to monitor. He was already a few steps slower last season. Perhaps another year of recovery will benefit Klay Thompson, who now has Andrew Wiggins to help defensively. Steph Curry is just Steph Curry. Nothing more needs to be said. Amazing.

Giannis Antetokounmpo is a two-time MVP, a Finals MVP and somehow underrated. In terms of power and physical dominance, he belongs in the conversation with Shaquille O’Neal and Wilt Chamberlain. The Bucks are my pick to the win the championship.

We’re not expecting much from John Wall at this stage of his career, but the Clippers’ most important addition was technically on the roster last season. Kawhi Leonard returns from his ACL tear and knows how to pace himself for the playoffs. Add in a healthy Paul George and the Clippers have the pieces for a run.

Theoretically, adding Jamal Murray and Michael Porter Jr. to a lineup with Nikola Jokic and Aaron Gordon should vault the Nuggets into the upper crust. We say theoretically because Porter Jr. is a constant injury risk and Murray missed all of last season. Acquiring Caldwell-Pope and Bruce Brown were underrated moves that should help the defense.

We’re big believers in Jimmy Butler and Bam Adebayo, but the roster is thin after those top-2. Their best hope is Victor Oladipo rediscovering his pre-injury All-Star form.

Came close to putting the Sixers in the contending spot but perpetually worried about Joel Embiid’s knees and James Harden’s decline. Tyrese Maxey can counter these concerns with an All-Star leap.

Their owner is suspended for the season and their point guard wants a stiffer punishment. Not exactly a harmonic way to enter training camp. Chris Paul, the aforementioned point guard, is now 37 years old and Father Time is undefeated. The Suns will be good but we fear they peaked with the 2021 Finals run.

Speaking of discord, the Nets enter training camp with a star player who demanded his coach and GM were fired. It was a terrible offseason for Kevin Durant. And yet, we trust he’ll show up and play at a star level. Kyrie Irving and Ben Simmons are more worrisome. The Nets can only beat themselves and they probably will.

Luka Doncic is an MVP candidate if he’s in shape. But the roster is devoid of a second star and the best hope, Jalen Brunson, left in free agency. Perhaps we’re underselling the potential of Christian Wood, but his production certainly hasn’t translated to winning at previous stops in Detroit and Houston.

On one hand, the Bulls should get better after a full season together and the return of Patrick Williams and, perhaps, Lonzo Ball. On the other hand, the team got worse as last season played out, not better and it shouldn’t be assumed that DeMar DeRozan will equal his production.

They’re young and brash and close to title contenders. Re-signing Tyus Jones and adding Danny Green means the conference finals are a realistic goal, even if their top-3 players – Ja Morant, Desmond Bane and Jaren Jackson Jr. – are all 23 years old and younger.

Dealing for Mitchell catapulted Cleveland’s contending timeline forward. If Darius Garland and Evan Mobley mesh with Mitchell, the Cavaliers are positioned for extended contention in the Eastern Conference.

Tough to know what to make of the Raptors. We’re not sold on Pascal Siakam as a ball-dominant star, but he has enough young help – specifically Scottie Barnes, OG Anunoby and Fred VanVleet – to give him a lesser role. The Raptors need something else for the leap into contention and Masai Ujiri deserves the benefit of the doubt that he’ll find it.

Gave up all their draft capital for Gobert, who provides Karl-Anthony Towns much-needed cover in the paint. We like the idea and fully endorse a future around Anthony Edwards. But Towns needs to find another gear to reach his potential. His circumstances weren’t great but it’s now seven years in the NBA without a playoff series victory.

Last season was a setback to Atlanta’s rise but they made a power move in the offseason by acquiring Murray. He should help the struggling defense. Still, cracking the top-6 in the East is hardly a given.

This is all about Zion Williamson. He got his max contract in the offseason and now he has to stay on the court. A good start would be to drop some weight. The Pelicans have another star in Brandon Ingram, so the foundation is in place should Williamson fulfill his potential.

They made some lateral moves after last season’s disaster, leaving us to wonder how this can possibly work with Russell Westbrook still in the lineup. It’s never smart to bet against LeBron James but he’s 37 and already promoting his son for the NBA. The Lakers’ clearest path to rejuvenation is Anthony Davis recovering his All-NBA form.

Re-signed Bradley Beal to a monster contract but the Wizards remain nowhere near championship contention. A successful season would require a longshot — Kristaps Porzingis staying healthy and rediscovering his All-Star potential.

The Knicks are in a better spot than other teams in this category because of their draft capital. It means they can pivot quickly by unloading bad contracts or dealing for a star. But after handing out over $430 million combined to Julius Randle, RJ Barrett, Jalen Brunson, Evan Fournier and Mitchell Robinson, it’s hard to place the ceiling above the play-in tournament.

The Blazers will be better than last season but they’re stuck in the nowhere zone because Dame Lillard doesn’t have a running mate. They’ll sell Grant as the second star, but he’s not good enough to vault Portland into contention. Unless one of their young players pop (Sharpe or Anfernee Simons), it’s hard to see a path out of middling.

Budding star Miles Bridges was charged with multiple felonies this summer after allegedly assaulting his girlfriend. His future in the NBA is in doubt. The Hornets owe lots of money to Gordon Hayward and Terry Rozier. They were bounced in the play-in tournament last season. We don’t blame Kenny Atkinson for turning down the head coaching job.

One of these years the Kings will be in the playoffs again. But it won’t be in 2023. At least Keegan Murray gives them hope.

The Pacers gave up midway last season and now have no problem being bad. They can sell Tyrese Haliburton and Mathurin as part of the future.

With a lot of young talent on paper, the Pistons will be a fun watch on NBA League Pass. But they won’t win many games. At least not yet. Wait two more years.

Cole Anthony is fun but there aren’t many reasons to watch the miserable Magic aside from No. 1 overall pick Banchero. It’ll be a while until Orlando is relevant again. It’s Disney on Ice.

The Rockets went down the tanking path two years ago by trading James Harden. Now they’re in the thick of it with losses piling up and a ton of future draft picks.

Hard to believe the Spurs are taking a tanking posture in the twilight of Gregg Popovich’s career. But here we are: Popovich’s squad missed the playoffs for three straight years and won’t be back this season.

A hole in the tanking strategy was exposed when Holmgren suffered a season-ending foot injury while playing summer ball. You have to wonder how long Shai-Gilgeous Alexander waits this out before requesting a trade.