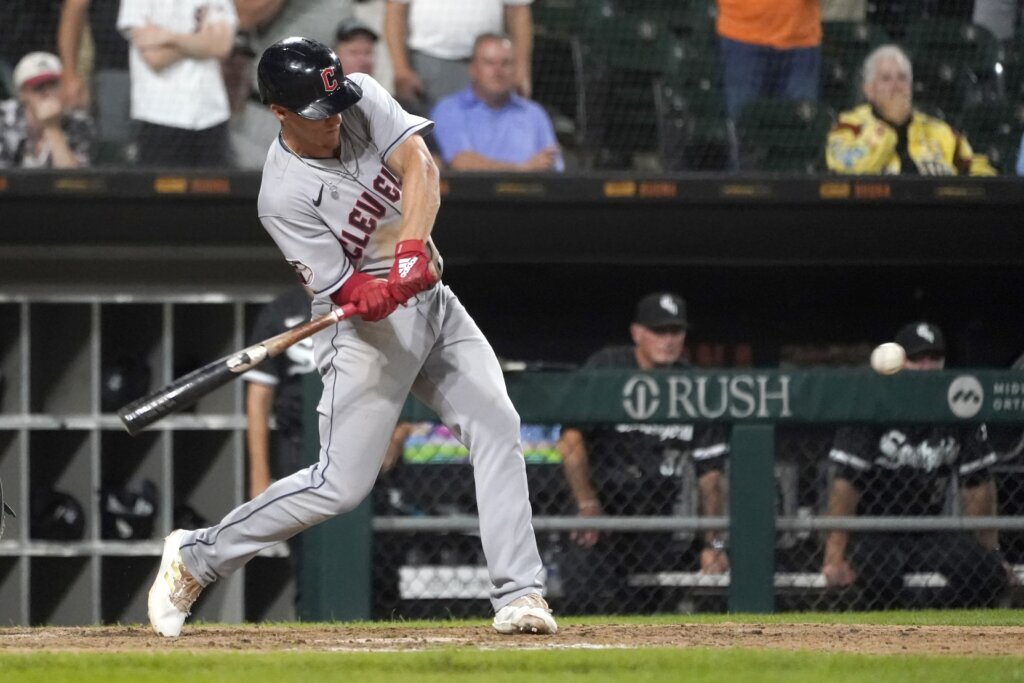 The Guardians won for the 12th time in 16 extra-inning games this season and expanded their lead to five games over the White Sox with 14 games remaining. The victory assured Cleveland, which improved to 10-7 against Chicago, of winning the season series and a tiebreaker in the event the teams finish the season tied for first place.

Straw got his game-winning hit off Jake Diekman (5-4), and Steven Kwan followed with his fourth hit — an RBI single — to score Straw. Kwan scored on Jose Ramirez’s sacrifice fly, and a throwing error by Chicago catcher Seby Zavala allowed Amed Rosario to score with an insurance run.

Emmanuel Clase (3-4), who allowed a game-tying single to Jose Abreu in the 10th for his fourth blown save in 40 chances, earned the win. Bryan Shaw survived a two-run home run by AJ Pollock — his 1,00th career hit — in the bottom of the 11th.

The Guardians took a 5-3 lead in the top of the 10th on a single by Josh Naylor and sacrifice fly by Oscar Gonzalez off Kendall Graveman. Elvis Andrus had a run-scoring fielder’s choice in the bottom of the inning, stole second and scored the tying run on Abreu’s single.

Aaron Civale, making his first start since Aug. 28 due to right forearm inflammation, limited the White Sox for three hits through the first five innings. But Chicago broke through in the sixth as Andrus hit a single and stole second base. The Guardians unsuccessfully challenged the safe call on the stolen base. Civale was pulled after walking Yoan Moncada.

Nick Sandlin took over and hit Abreu on the arm to load the bases and set up Eloy Jimenez’s tying single. After Andrew Vaughn struck out, the Guardians nearly escaped as Pollock hit a potential double play grounder to second. But Rosario’s relay throw skipped wide of first base, allowing two runs to score.

Cleveland took advantage of two walks by Jimmy Lambert, who replaced ace Dylan Cease, to start the seventh. Kwan hit an RBI single off Aaron Bummer, and Ramirez barely beat a long throw from Andrus for a tying single. Josh Naylor followed with a single to shallow left. But Andrus recovered to throw home, where home plate umpire Shane Livensparger ruled Zavala tagged Rosario for the final out. However, replays showed Rosario’s hand tagged the plate before Zavala tagged him, but the Guardians were out of challenges after unsuccessfully challenging Andrus’ stolen base.

Cease lowered his ERA to 2.13 despite striking out three, tying a season low in an April 21 loss at Cleveland. Cease has a 1.35 ERA with 146 strikeouts in his last 21 starts.

Gimenez poked a drive down the left field line that skipped past a tumbling Pollock for a triple to start the second. Austin Hedges’ sacrifice fly gave Cleveland a 1-0 lead that stood until the sixth.

Chicago didn’t advance a runner past first base against Civale until two out in the fifth, when Zavala’s single advanced Pollock to second. But Harrison flied to the warning track in right.

The start of the game was delayed by 40 minutes because of rain.

White Sox: SS Tim Anderson (sagittal band tear of left middle finger) took batting practice and fielded grounders but wasn’t sure if he would need a minor league rehab assignment before rejoining the team. “We would love for him to go, but he’ll make that decision,” Cairo said. Andrus took grounders at second base in anticipation of Anderson’s return, which isn’t likely to occur during this three-game series. “I don’t have a time table on it,” Anderson said. “It’s just mostly how I feel.” … RHP Johnny Cueto (sinus infection) said he’s healthy to make his start Thursday after being scratched Sept. 17. “I felt weak, and my vision wasn’t right,” Cueto said.

Dave Kidd: Southgate insists he’s still right man for England but fans are bored of him and he’s growing tired of job

Today24.pro
Sweet Potato Souffl Trump Claims He Declassified Documents Using Special Powers! The 31 most stunning photos across women's sports from the last month — Tennis, European Championships, and more How to Get MICROSOFT OFFICE for FREE in 2022!