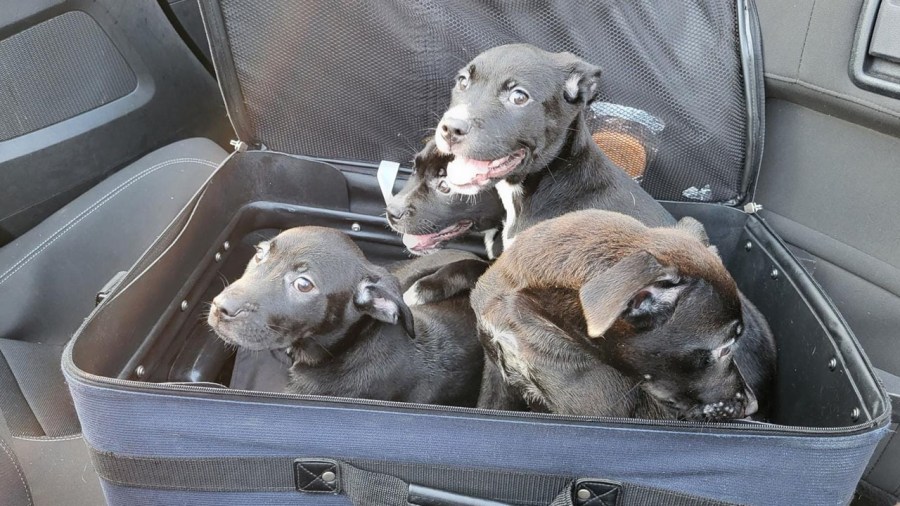 GUILFORD COUNTY, N.C. (WGHP/NEXSTAR) – A good Samaritan helped rescue four abandoned puppies early Saturday morning after noticing a suitcase seemingly moving on its own on the side of a North Carolina highway, according to Guilford County Animal Services (GCAS).

A photo shows the four young dogs, all mostly black with small white patches, stuffed inside a blue suitcase. The piece of luggage, which was dumped along a road in Guilford County, was almost completely zipped up, except for one small section, according to the shelter.

Animal Services workers said the person who found the puppies was shocked and brought them to the shelter immediately.

"Shout out to all the Good Samaritans who take the time to help animals in need," GCAS posted on Facebook Saturday.

A spokesperson for Guilford County Animal Services, Stephen Carlson, said that the puppies, all four of which are females, are doing fine.

However, the medical team says they are very under-socialized and will require foster-to-adopt homes with experienced caretakers before they can be put up for adoption.

"They will require lots of human interaction, affection and patience," Carlson told Nexstar.

For now, the puppies – Tumi, Samsonite, Stowaway and Carion (carry-on) – are settling into a new environment, thanks to a good Samaritan's decision to investigate a discarded suitcase.

Today24.pro
7 MUST-DO Biceps Exercises for Bigger Arms US chess star ‘likely cheated more than 100 times’ – investigation 7 Perfect Pear Recipes from Savory to Sweet A 34-year-old coder quit his $300,000 job at Stripe to build up his after-work project. Here's why he's convinced it was the right thing to do.