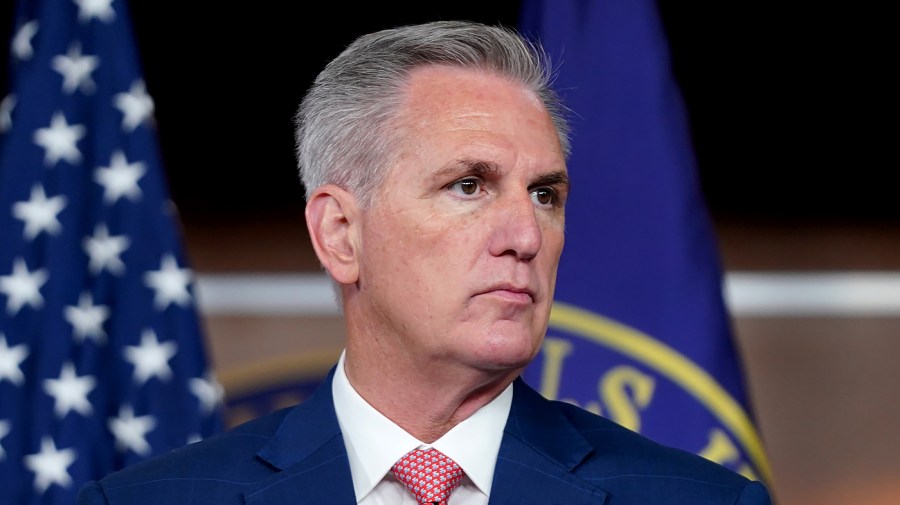 House Minority Leader Kevin McCarthy (R-Calif.) is urging members of his conference to vote against any funding bill that does not address a migration surge at the U.S.-Mexico border.

“President Biden is asking for a government funding bill that simply kicks the can to an unaccountable lame-duck Congress that does nothing to actually address the nation's problems – especially the crisis at our southern border,” McCarthy said in a statement posted to Twitter on Tuesday evening. “Under Biden and Pelosi there have been more than 3.5 million illegal border crossings – more than the entire population of Chicago. Democrats' open border policies have led to an unprecedented crisis, and they have no plan to secure the border.”

“If Biden & Democrats don't use this government funding bill to address the border crisis immediately, I'm voting NO on this bill and I urge my colleagues to do the same,” McCarthy said.

McCarthy's statement about a “lame-duck Congress” echoes pushes from conservatives in both the House and Senate who say that Republicans should not support any short-term continuing resolution that does not last until at least the start of the next Congress. Their argument is that Republicans may control one or both chambers, giving them more leverage in negotiations.

It also puts a spotlight on border issues that Republicans are stressing in their midterm campaign arguments. The topic gained another surge of attention last week after Republican Govs. Greg Abbott of Texas and Ron DeSantis of Florida bused and flew migrants to Washington, D.C., outside Vice President Harris’s home, and to the wealthy and liberal island of Martha’s Vineyard, Mass.

A House GOP press conference on Tuesday featured a chart citing a Sept. 9 to Sept. 13 NBC News poll that found Republicans with a 36-point edge over Democrats on which party registered voters favor to handle border security.

Today24.pro
The Sandman Johanna Constantine Coat The 31 most stunning photos across women's sports from the last month — Tennis, European Championships, and more How to invest in communications stocks, a sector that's huge, highly diversified, and growing — offering something for almost every type of investor Sweet Potato Souffl