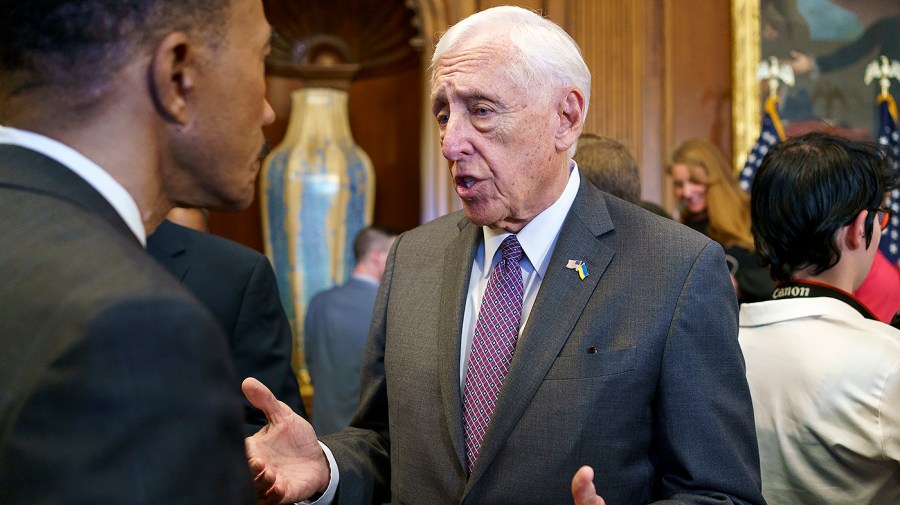 House Democrats could vote as soon as this week on a pruned-down package of police and community safety bills, according to Majority Leader Steny Hoyer (D-Md.), who said the negotiators are close to the deal that’s eluded them for months.

While the talks are continuing on Tuesday, Hoyer said party leaders are “hopeful that those discussions will prove fruitful in the near-term — meaning the next 24 hours.”

The package now under consideration is thinner than the one moderate Democrats were hoping to move earlier in the summer. Hoyer said it will consist of four bills:

• One, sponsored by Rep. Josh Gottheimer (D-N.J.), a co-chairman of the bipartisan Problem Solvers Caucus, would provide federal grants to small local law enforcement agencies with fewer than 200 officers.

• Another bill, sponsored by Rep. Katie Porter (D-Calif.), promotes the use of mental health workers, in lieu of law enforcement officers, in responding to incidents involving people with special behavioral needs.

Cut from the package were several other bills favored by moderates, including one sponsored by Rep. Abigail Spanberger (D-Va.) to provide federal funds to help local police departments increase salaries and hire new officers, particularly in small rural communities.

A Spanberger spokesperson said the Virginia Democrat is still working to pass the bipartisan bill — “whether it’s this week or in the coming weeks.”

“She has heard this need directly from local law enforcement in Virginia — and making sure these men and women have the resources they need to keep Virginians safe remains a top priority,” the spokesperson said.

Moderate Democrats have been eager to vote on the law enforcement package all year, not least to provide vulnerable front-liners some new ammunition to take back to their districts heading into challenging elections.

Horsford is in a highly competitive “toss up” race, according to analysts at the nonpartisan Cook Political Report, while the districts represented by Porter and Spanberger are in the “lean Democratic” category. Demings, meanwhile, is challenging GOP Sen. Marco Rubio (Fla.) in November.

Democratic leaders in July had scheduled a vote on the community safety package, alongside legislation to ban assault weapons. They were forced to scrap that plan following objections from liberal lawmakers in the progressive and Black caucuses, who had demanded that any new police funding be accompanied by tougher penalties for abusive officers.

Hoyer said Tuesday that accountability for law enforcers is “a critical component of dealing with public safety,” adding that the sponsors of the updated package have made changes that should satisfy the liberal critics, both on and off of Capitol Hill.

“We believe accountability has been addressed,” he said.

AI in Insurance: How three forward-looking insurers are infusing AI into their front, middle, and back offices

Youths will be proponents of my administration – Obi

Michelle Heaton joins Celebrity SAS: Who Dares Wins as she celebrates 17 months of being sober