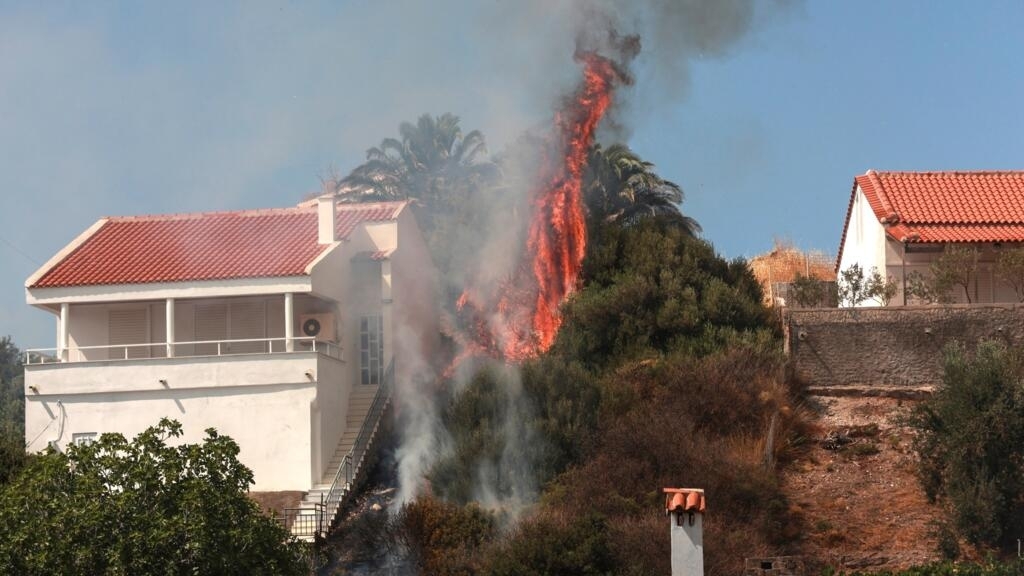 The country is in the grip of a heatwave that began on Saturday and is expected to last 10 days. Temperatures were set to rise to 42 degrees Celsius (107 degrees Fahrenheit) in some regions. Experts blame climate change for the soaring temperatures -- and warned that worse is yet to come. Fires raged in the north, east and south of Greece including on the island of Lesbos. The blaze raged on Sunday on Lesbos after it broke out a day earlier, causing the evacuation of hundreds of tourists and residents from the beachside village of Vatera. At least four houses were destroyed, state TV ERT reported, and fires damaged an unknown number of shops, hotels and beach bars in the village. Dozens of firefighters on Sunday morning clamoured to control the blaze, with four water-dropping planes and two helicopters in operation. A wildfire was ablaze for a fourth day in Dadia National Park, known for its black vulture colony, in the northeastern region of Evros. The fire has already destroyed nearly 500 hectares (1,220 acres) of woodland. More than 300 firefighters struggled to control the fire in Evros and late Saturday, the thick smoke forced the evacuation of the village of Dadias. It was not known how many people were evacuated. "The most important thing for us is the safety of the villagers and all forces will be deployed there," Evros governor Dimitris Petrovits told Athens News Agency. The fire had already passed the raptor birds observatory and was closing in on the buildings of the protected area management unit. Petrovits said collecting and treating injured animals was a high priority for authorities. In the Peloponnese, a southern peninsula, a fire that broke out Saturday morning forced the evacuation of Chrysokelaria village. A wildfire in mountains near Athens on Wednesday also damaged homes and forced hundreds of people to evacuate after gale-force winds earlier this week. Greece's worst wildfire disaster killed 102 lives in 2018 in the coastal suburb of Mati, east of Athens. The latest fires come after a heatwave and wildfires last year destroyed 103,000 hectares (255,000 acres) and claimed three lives in Greece. Fires in parts of France, Spain and Portugal have already burned more land so far this year than was destroyed by flames in all of 2021. The area, some 517,881 hectares, is equivalent to the size of Trinidad and Tobago.

Primaries to watch in Wisconsin, Vermont, Connecticut, and Minnesota