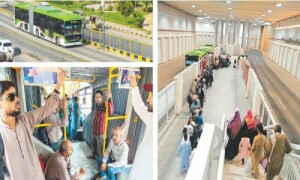 KARACHI: The people of Karachi, who have been yearning for a better transport service for nearly three decades, gave a ‘positive’ response to the Green Line bus service during its first six months of running as close to six million citizens have travelled through its dedicated corridor on 80 buses in the given period.

The public response raised the hopes that more such facilities could multiply the number of travellers and bring to an end the decades-old miseries of citizens of this beleaguered city.

The Green Line of the Bus Rapid Transit System is the first-ever public transport operation launched in the metropolis by the federal government after years.

According to the official data, from the formal launch on January 10 till July 7 evening, a total of 5,811,570 passengers travelled on Green Line without any break.

This shows on an average 968,595 people moved on 80 buses of the project every month as the officials say that the starting month of the project recorded 50,000 people travelling everyday which gradually came to 35,000 passengers daily.

“Since its launch, the service is on without any break and adding value to people’s comfort with each passing day,” said Abdul Aziz, general manager operations of the Sindh Infrastructure Development Company Ltd (SIDCL) — a public limited company to carry on the business of infrastructure development which is the builder and operator of the project.

He also referred to a plan in the pipeline to add technology-based value to the service which would further help the commuters. It would be available soon within a month, he said.

“Through this tech-based value addition, an app would be available for the passengers to pay their fare online and top up their prepaid cards from anywhere,” he added.

Escalators, lifts ‘out of order’

The federal government funded public transport project despite off and on complaints about maintenance of its related services has been seen as a ‘blessing’ for the people mainly in district Central, who believe that the much-awaited scheme has finally started yielding results.

“I get on the bus from Nagan Chowrangi and get off at Gurumandi [intersection],” said Sabeen Asif, a schoolteacher from North Karachi. “Before the Green Line, I along with other working women of my [residential] area had hired a private van for pick and drop. Most of us have now quit the van and availing the [Green Line] service. It’s good both, economically and for its comfort.”

Around a million passengers every month are paying Rs15 to Rs55 for their respective destinations and enjoying the ride in an 18-metre-long bus that passes through 22 stations over 22-kilometre route from Surjani Town to Numaish.

Envisaged and executed in February 2016 by then prime minister Nawaz Sharif, the Green Line project was originally scheduled to complete in a year with an estimated cost of around Rs16.85 billion. However, it took almost six years to complete and the cost reached Rs35bn to finish the project. Almost after six years of its ground-breaking and after suffered many hiccups over the period incurring almost double the cost, the project formally began operation on Jan 10.

With the launch of Green Line, however, a question remains about the effectiveness of the project, which is originally designed to be connected with the Sindh government-funded Orange Line Bus Rapid Transit System (BRTS) — the shortest route in all the five BRTS. With the arrival of 20 buses for the Orange Line from China, the authorities this time are hopeful that the service would be launched within next few weeks.

“The infrastructure development work on the Orange Line is almost done and buses are already here. The test drive of these buses is going on over the track. The service will be launched anytime soon,” said a Sindh government official.

'ALL ABOARD!' USS The Sullivans welcomes tours again