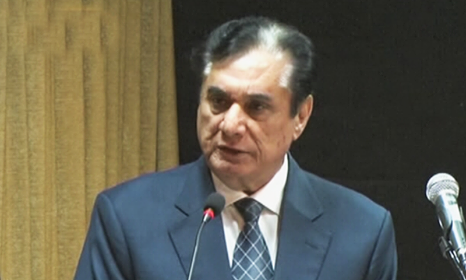 According to the terms of reference, the commission will probe the allegations of sexual offences, including harassment, assault, outraging and insulting modesty, misdemeanour, misconduct, misuse and abuse of authority, levelled by the complainant.

It will also look into any violation of the judicial process, security of person, and right to fair trial.

The commission will also determine if any person(s) was liable of an offence defined in the Pakistan Penal Code (PPC) 1860.

The commission will also probe Ms Tayyaba’s allegation that the audio/video provided by her to the authorities was leaked to the media “for ulterior motive and design”.

The issue had come to light after a private TV channel aired an audio clip in July 2020, which contained a telephonic conversation between Ms Tayyaba and the former NAB chairman.

Ms Tayyaba had not only levelled allegations against Mr Iqbal but had also accused former prime minister Imran Khan for detaining her along with her husband in Prime Minister Office when she had met him to lodge a complaint.

Earlier this month, National Assembly’s Public Accounts Committee had also sent a recommendation to Prime Minister Shehbaz Sharif for the removal of Mr Iqbal as the chairman of the Commission of Inquiry on Enforced Disappearances in light of these allegations.