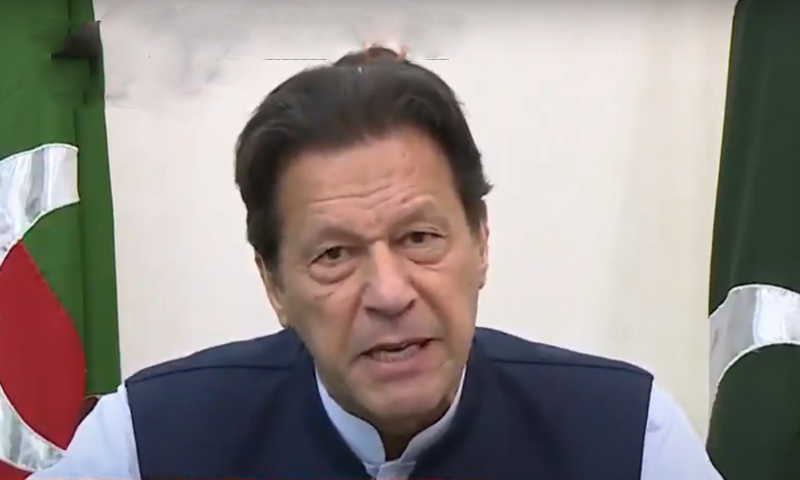 ISLAMABAD: A day after the federal cabinet approved an ordinance pertaining to the sale of national assets in a bid to overcome the economic crisis faced by the country, Pakistan Tehreek-i-Insaf (PTI) Chairman Imran Khan opposed the legislation and said the “thieves” should not be allowed to sell the assets.

On his Twitter account, the former prime minister said: “How can imported government brought to power through US conspiracy, led by ‘crime minister’, whose family along with Zardari have volumes written on their corruption, be trusted with the sale of national assets and that too through bypassing all procedural and legal checks.”

“These people have been plundering Pakistan for the last 30 years and are now responsible for the present economic meltdown. These thieves should never be allowed to sell our national assets in the devious manner they are attempting. The nation will never trust them with our national assets,” the PTI chief further said.

The remarks by the former premier came a day after the federal cabinet gave its nod to a law proposed by the Cabinet Committee on the Inter-Governmental Commercial Transactions to sell stakes of oil and gas companies and government-owned power plants to the United Arab Emirates (UAE), Saudi Arabia, Qatar and other countries.

As per the ordinance, courts will not be able to entertain petitions against the sale of assets and shares of state-owned companies to foreign countries.

Defending the proposed legislation, the source said except for one deal, not a single agreement inked by Pakistan with Saudi Arabia, the UAE, and Qatar materialised during the past five years as foreign states were not ready to invest through the Privatisation Commission.

Under the proposed law, foreign states will be able to invest directly in state-owned entities. “This would improve management of these entities, as the said states would bring efficient management to run these enterprises,” the source added.

Ordinance for sale of assets

The proposed law will provide for a mechanism to carry out a commercial transaction under an inter-governmental framework agreement to promote, attract and encourage foreign states to have economic and business relations with Pakistan, according to the documents.

The scope of the law will be expanded to all “commercial transactions” including sale, purchase, investment, divestment, procurement, licensing, lease, joint ventures, assignments, concessions, services contracts, management contracts or other deals arising out of a G2G (government-to-government) or commercial agreement, the documents added.

What we know of the symptoms and spread of monkeypox