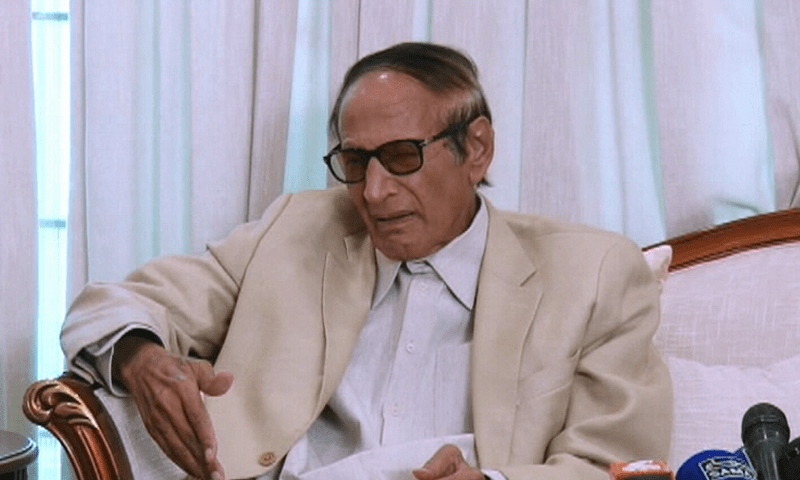 LAHORE: Pakistan Muslim League (PML-Q) President Chau­dhry Shujaat Hussain, the man whose letter supposedly turned the tide of the Punjab chief minister’s election, went on record with his reason for opposing the PTI-backed candidature of his cousin, Chaudhry Parvez Elahi, saying he could not support “anyone who criticised state institutions”.

He clarified that while Elahi “was, is and would remain” his candidate for the office of chief minister, he (Shujaat) could not allow him to become “the nominee of PTI”.

Chaudhry Shujaat cited this reason for his opposition to PTI backing for Elahi in a series of tweets that were shared from Mr Shujaat’s official Twitter account.

Parvez Elahi’s son, Moonis, confirmed that the account does indeed belong to the PML-Q chief and is operated by his son, Chaudhry Salik Hussain.

PML-Q chief insists Elahi remains ‘his man’ for CM slot, just not as a PTI-backed candidate

Moonis Elahi, however, claimed that Chaudhry Shujaat was under “immense pressure” and he politely refused to support Parvez Elahi as a candidate of Imran Khan.

Speaking to media persons after his bail hearing on Saturday, asked him to elaborate as to what kind of pressure was being exerted on Chaudhry Shujaat, Moonis said the reporters should put this question to Chaudhry Shujaat.

Moonis said he had gone to see Shujaat Hussain and asked whether he had written the letter on which he replied that he did.

“I have instructed the PML-Q MPAs not to vote anyone in the chief minister’s election being held in Punjab Assembly,” he quoted Chaudhry Shujaat as saying.

As Moonis contested that he [Chaudhry Shujaat] wanted Parvez Elahi not to win, the latter stated that Elahi should become the chief minister, but not as a candidate of Imran Khan. “But when I told him that in such a situation Parvez Elahi will lose the election, the PML-Q president kept mum,” Moonis stated.

It may be mentioned that Chaudhry Shujaat’s letter addressed to Punjab Assembly’s deputy speaker / presiding officer on the election day states that PML-Q president had instructed all 10 MPAs of the party, including CM candidate Parvez Elahi, “to poll their votes in favour of Muhammad Hamza Shehbaz Sharif”.

The letter also carried copies of PML-Q president’s directions to party’s 10 MPAs issued on the election day. However, none of these letters have been shared with the media thus far.

In his tweets, Shujaat Hussain suggested that all political leaders should subordinate their personal interests to the national interests so that the country could come out of the quagmire of crises. Otherwise, he said, the country would further be “divided into ideologies” and become “prey in the hands of people working for their vested interests”. He said the country was already facing a critical situation.

Referring to confrontation within the house of Chaudhrys of Gujrat, Shujaat Hussain said political conflict should not be confused with personal disagreement and stressed that all should stop politics of confrontation and work for the betterment of country and its security and well-being.

“Anyone who gets a chance to rule, should contact political opponents and jointly work for the security and stability of the country,” the PML-Q president concluded.

In a related development, Chaudhry Shujaat had a meeting with Prime Minister Shehbaz Sharif and PPP co-chairman Asif Ali Zardari on Saturday to discuss the political situation after the chief minister’s election.

Sources say this late-night meeting had decided that Hamza Shehbaz should not take oath as CM late in the night and do so in the morning. Sources claimed the meeting was of the view that the case against the deputy speaker’s ruling might be stretched to several dates.

Scientists seek to develop hybrid coral reef off of Miami

Yes, We Will Question the Integrity of Our Federal Law Enforcement Officials