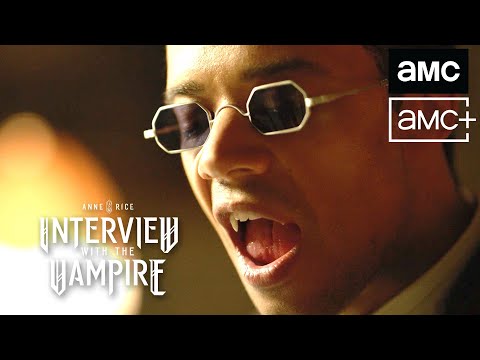 It's been a long and winding road to the screen for AMC's Interview With the Vampire.

Thankfully, AMC dropped the first trailer for the adaptation of Anne Rice's thrilling novel, and we even got a premiere date.

All the good news dropped during San Diego Comic-Con on Saturday, and honestly, the show looks like it will be worth the wait.

The series premieres Sunday, October 2, at 10 p.m., out of the premiere of the last-ever episodes of The Walking Dead.

Based on Anne Rice’s iconic and bestselling novel, Interview with the Vampire follows Louis de Pointe, Lestat De Lioncourt and Claudia’s epic story of love, blood and the perils of immortality.

Per its official logline, the series “follows Louis de Pointe du Lac, Lestat de Lioncourt and Claudia’s epic story of love, blood, and the perils of immortality, as told to journalist Daniel Molloy."

"Chafing at the limitations of life as a black man in 1900s New Orleans, Louis finds it impossible to resist the rakish Lestat’s offer of the ultimate escape: joining him as his vampire companion."

"But Louis’ intoxicating new powers come with a violent price, and the introduction of Lestat’s newest fledgling, the child vampire Claudia, soon sets them on a decades-long path of revenge and atonement.”

AMC appears to be doubling down on the works of the late Rice, who is well-known for bringing readers The Vampire Chronicles and Lives of the Mayfair Witches.

Thankfully, Mayfair Witches has already landed a formal series order, so there's plenty of supernatural fun in store for fans of that kind of stuff.

Vampires are making a comeback in 2022, with Netflix bringing First Kill to life and Peacock's Vampire Academy on tap for a fall launch.

The Lives of The Mayfair Witches will focus on an intuitive young neurosurgeon who discovers that she is the unlikely heir to a family of witches.

As she grapples with her newfound powers, she must contend with a sinister presence that has haunted her family for generations.

But first, we'll be introduced to Interview With The Vampire, and we are so excited about it.

Check out the trailer below and hit the comments with your thoughts!

Dept. of Corrections is prioritizing mental health for inmates

Today24.pro
Matthew Judon Fed Up With Joint Practices? Twitter ‘Like’ Hints Feelings 10 Over The Top Boss Moves We DID NOT SEE COMING How Charlize Theron and KiKi Layne Spar in The Old Guard Anatomy of a Scene Kate Middleton will take on tennis legend Roger Federer at secret location to raise money for charity