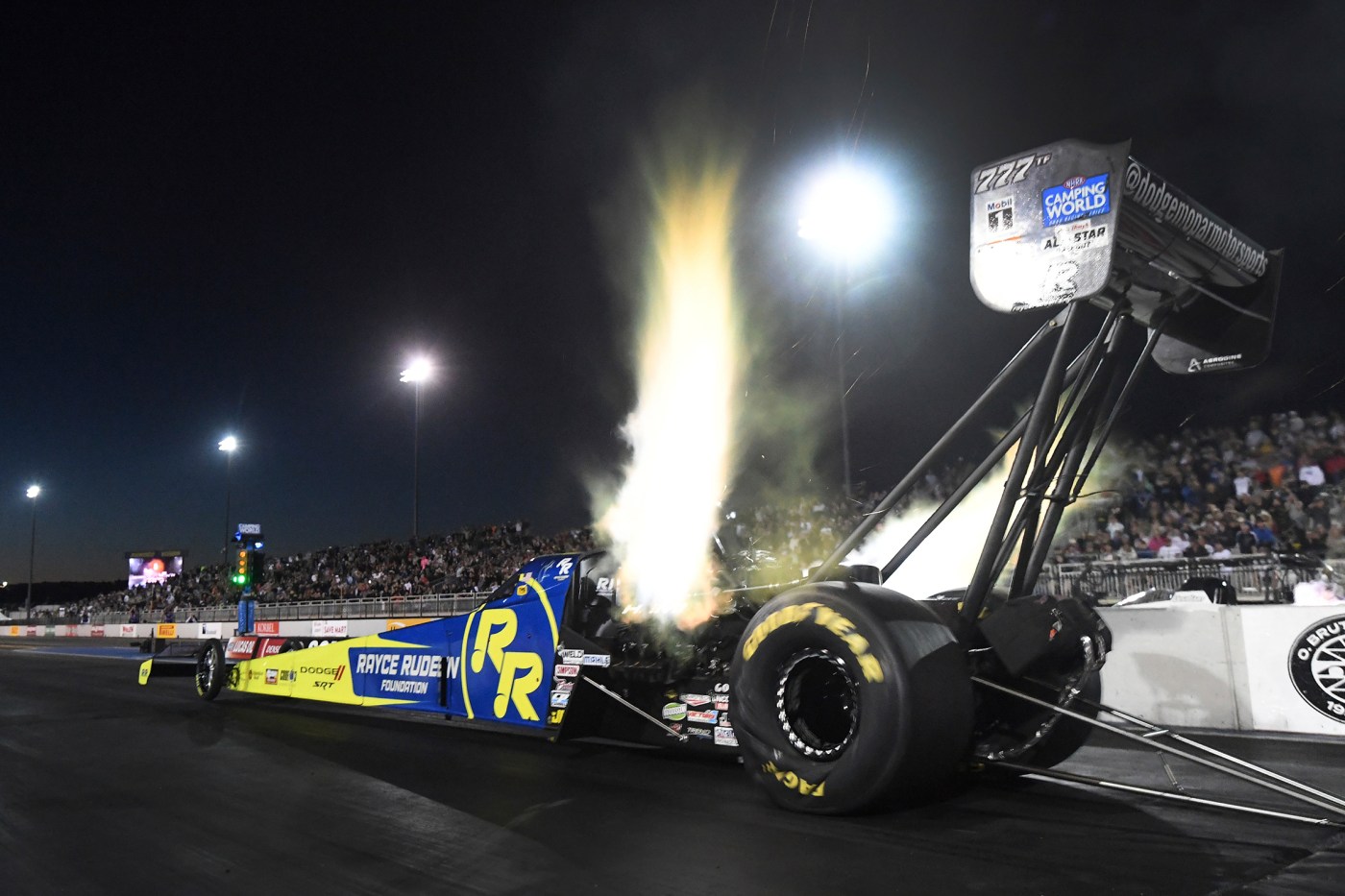 The women were doing it for themselves and each other at Sonoma Raceway. Leah Pruett, Erica Enders and Angelle Sampey were each wearing yellow hats as the top qualifiers after Saturday’s action during the DENSO NHRA Sonoma Nationals.

Sampey made the third-fastest run in Pro Stock Motorcycle history at 6.700 seconds and 200 mph, good enough for a new track record.

“I’m still trying to be better and trying to improve, and I’m lucky to have a really successful team behind me,” Sampey said. “My focus is just on trying to get down the track and Andrew (Hines) has done a wonderful job tuning my bike. I’m really glad to have had some success with him tuning this bike. If we leave the starting line right, it’s going to be fast. This is an amazing class to compete in, but you have to be on your game all four rounds if you want to be successful.”

Sampey was excited as she realized Enders and Pruett would join her as top qualifiers.

“I think having such successful women says a lot more about the sport’s acceptance of women. It says a lot about how women can have an education in the mechanical field,” Pruett said. “I think we’re a representation of the most progressive times in any modern sport.”

Pruett, who was fastest Friday night, continued that effort to earn her first top qualifier spot of the season and 12th of her career. Her Top Fuel Dragster made 3.689-second run at 327.59 mph to stand up against Doug Kalitta and Mike Salinas, who finished second and third.

“It’s extremely exciting to qualify No. 1 and it shows just difficult it is for anybody,” Pruett said. “We know exactly where we’re at. It feels like the work has been validated and we’re just going to keep digging on that. If we’re able to do what we did in Denver and make it to the final and possibly win it, that’s when we’re really going to see it come full circle. We are racers and we are finally feeling like we get to race, and that’s what is most exciting for us.”

For Pruett, being No. 1 brings a sense of comfort and certainty as she looks ahead to Sunday’s early matchups.

“We’re finding our stride and we’re able to show that,” Pruett said. “The yellow hat on the head is very cool.”

Pleasanton’s Ron August Jr., who had the sixth-fastest run Friday night in Top Fuel, slipped to 15th on Saturday.

“The field is stacked, so it’s super-tough and we’ll have to go to work (Sunday) and get it done,” Enders said after her run of 6.506 seconds and 210.97 mph put the Pro Stock points leader on top in qualifying. “But to end it Saturday on top, it definitely makes you sleep a little easier Saturday night… In years past here at Sonoma, we’ve never had super-successful Sundays, so we’re hoping to change that.”

Enders, who has never won in Sonoma, will open Sunday’s eliminations against Fernando Cuadra Jr.

Robert Hight was the top qualifier in Funny Car, nixing the possibility of having women in the top spots in all four categories. Alexis Dejoria was fast Friday and Saturday, but fighting track conditions, her final run of 3.867 seconds Saturday afternoon was good enough only for the third qualifying spot.

Sonoma wasn’t so kind Saturday to some of the sportsman drivers who call the track home as all five Marin County drivers were eliminated. David Cook’s 1967 Ford Mustang broke out and the Novato resident lost to Monte Green in the second round of Top Sportsman eliminations.

His daughter, Hannah Cook, went out in the first round in Top dragster. She had a great start off the line with a reaction time  of .20 seconds, but missed her target number at the finish line, handing the win to David Myhre.

San Geronimo’s Ted Van Midde III lost in the second round of Super Comp eliminations when he broke out against Logan Warr. Van Midde was too fast for his index by just .014 seconds, but even though the cars are supposed to go fast, the drivers have to make sure they don’t get caught speeding.

San Rafael’s Jim Williams was eliminated in the first round of Super Comp action and Justin Strom of Novato lost in the second round in Super Gas.

Today24.pro
The Shins Off-Air Performances Chinese Tourist Hot Spot Sanya Imposes COVID-19 Lockdown College students are quietly one of Chipotle's most important customers Troy Deeney: With Haaland and Nunez, Man City and Liverpool are so good it’s a joke… the others won’t get close