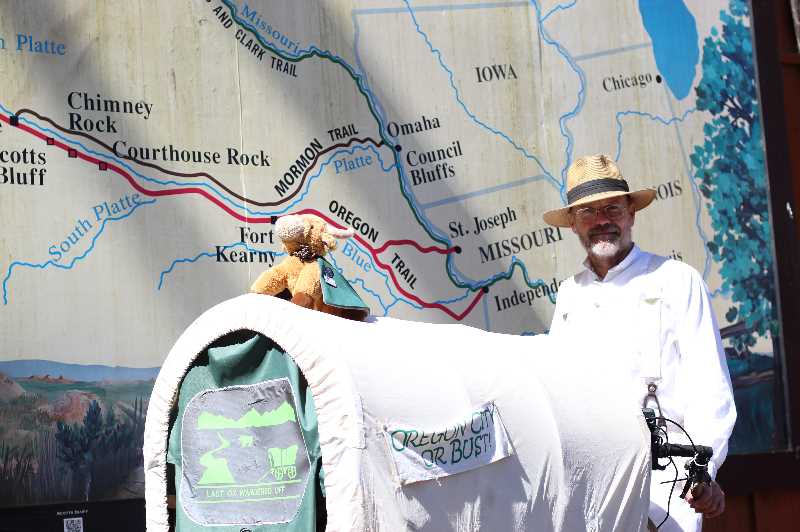 PORTLAND, Ore. (PORTLAND TRIBUNE) -- 2,475 miles. 95 days. Gusting winds. Hot weather. Cold weather. Wet weather. A 200-pound cart filled with food and water. Wearing out four pairs of shoes. With numbers like that, most of us would give up any thought of walking the Oregon Trail from Missouri before the journey even began — but not Don Martin, whose trek ended in Oregon City this week.

The Navy vet from Prineville knew what to expect on the trail, having earned the nickname "Dundee," while hiking the Appalachian Trail nine years ago, so named for the Australian bush hat he'd picked up when hiking the Blue Mountains near Sydney, Australia.

"I was on reserve duty in Australia. And we had an extra day and we went hiking in the Blue Mountains east of Sydney. You can't go out there and hike without a hat, so I bought a hat and brought it back and it had some unfortunate movie connotations," Martin said. "Trail names are a time-honored tradition on the Appalachian Trail, and your fellow hikers give them to you… They're usually not cool, they have to do with some quirk or something and you can't change them. So I ended up as Dundee."

PPB: Oaks Amusement Park closes after fight, threat to ‘shoot up the park’

This wasn't Martin's first experience with the Oregon Trail.

"I've done a lot of long-distance bicycle tours and it was time to do another hike. I had in mind something in Europe, but nobody was flying to Europe for obvious reasons," Martin said, referring to the COVID pandemic's travel restrictions.

"There's a branch of the Oregon Trail, Meek's Cutoff, that goes basically right by our house," Martin said. "That was 600 miles. I did that last year from Vail to the Dalles and then to right here (Oregon City). Having done that, this year, it was the whole trail."

Martin's journey began on April 17 in Independence, Missouri, which is near Kansas City, on the border of Kansas and Missouri.

Technically speaking, the Oregon Trail began wherever someone began their journey but eventually led everyone to Kearney, Nebraska, on the Platte River.

People making the journey in the 1800s looking for land, opportunity or a chance at a new life looked nothing like you see in the movies. There were no horse-drawn wagons. No one sat in the wagons as they made their way the 2,000 or so miles to Oregon.

"There's a lot of ways you can experience the trail," said Martin, "but it wasn't like in the John Wayne and Maureen O'Hara movies where everybody's riding in the wagons. Many of the wagons didn't even have seats. They were pulled by oxen, and oxen are led from alongside; they're not driven with reins from a wagon box. For most people, the quintessential part of traveling the Oregon Trail was putting one foot in front of the other for more than 2,000 miles. You can do that today just like they did. People drive it, people bicycle, and that's all fine. But when you walk the trail, you really are experiencing the same weather and the same train and the same places that Oregon's forebears experienced in the same way. And you can't really replace that experience with anything else."

Martin wasn't alone on his trip. Like the thousands of pioneers before him he had a wagon — a one-wheeled push wagon, built in covered wagon style, named "Ollie" after the phrase "Olly, Olly oxen free" used to let children know it was safe to come out of hiding while playing a game of Hide and Seek. In the case of "Ollie," the wagon it was in reference to the wagon's distinct lack of oxen to pull it along the trail.

The Portland Tribune and its parent, Pamplin Media Group, are KOIN 6 News partners.

That is until someone decided Martin needed an ox and gave him Last Ox, a stuffed mascot that rode on top of the wagon instead of pulling it. Last Ox has his little superhero cape, and he's plainly labeled on the cart.

The push wagon and the stuffed ox weren't the only difference between Martin's journey and that of the original travelers of the Oregon Trail — his food consumption was a bit different too. Besides the standard steel-cut outs, dried meat and fruit, rice and other non-perishables that many of the pioneers would recognize, Martin supplemented his 5,000-calorie-a-day need for fuel with some modern conveniences.

"I left with this with a fair bit of food and granola bars, dried fruit, dried meat, rice, steel-cut oats because they're very compact and have a lot of food value in them," said Martin, "but of course, I bought food along the way, breakfast sandwiches whenever I could get them, a lot of tortillas, hummus whenever I could find it, but it's fairly hard to find. Ice cream, packaged salads. I mean, you can't carry that with you… You have to buy it where you can find it. On any long-distance hike or long-distance bicycle trip, you're burning a lot of calories, and it's a major challenge to eat enough to keep up. So, when you hit a town or a store or whatever, it's milkshakes and pizza and ice cream and, you know, whatever you can to make up for the calories."

Despite the cart carrying food and water, despite the company of Last Ox, despite an embroidered message from his wife saying "I'm fine, everything is fine" surrounding a not-so-fine-looking cat which Martin was able to see with each step behind the cart — the trip was not an easy one.

"The toughest aspect of the trail was the weather. This was an extraordinarily windy year," Martin said. "I tried to be indoors for the worst of the weather. So that meant a lot of nights in motels. If the wind gets much over 30-35 miles an hour, the cart has a lot of sail area, if you will, and it becomes quite a wrestle. There was some seriously bad weather, and it wasn't just my imagination. People along the way said, 'Yeah, this is kind of a tough year.'"

The weather, though, wasn't unexpected, and Martin said, "Every journal I've read — be it from 10 years ago or from 175 years ago — everybody comments on how tough the weather is. The first few weeks of the trail, 'It's wet, it's cold. It's just early-spring miserable.' That's something you have to be prepared for and something you have to be ready to cope with. I stayed warm and dry to the best of my ability."

Wind, wet, cold and then, in central Idaho, Martin said the heat finally arrived: "The highest temperature I'd seen was, I don't know, just over mid 80s, which isn't bad. But then we had days 100 to 104. And that kind of thing continued off and on all the way to here (in Oregon City), basically a lot of really hot sunny days."

"As far as terrain, it's not a difficult hike. The Oregon Trail is an enormous miraculous string of river valleys and relatively gentle divides that were pieced together by fur traders and the early explorers to get out West, and they did a really good job with it," Martin said. "The most mountainous parts are right here in Oregon, getting over the Blue Mountains. And the Barlow Road, getting over Mount Hood. It's not a big climb and descent to paths like people imagine it to be. The first real mountains that they had to climb, you know, more than five or 600 feet in a stretch, was the Blue Mountains. Today, that's pretty easy. The only road through much of it is the interstate, and the interstate is fairly well graded. So, getting up and over the Blue Mountains was long, but it was not difficult. For the pioneers, it was a lot tougher."

"When you got up in the morning and pulled your boots on, your feet said, 'Oh, no, not again,' and your shoulders, your pack on your shoulders and your hips, where your belt rides, are just mad another day of this, can we have a day off, I never had that feeling along the Oregon Trail.

"A lot of it is because I had a covered wagon, so it carried the weight. It'll hold 200 pounds of stuff in it. Everything I needed was riding on that wheel and not on my back. And that makes a big, big difference.

"People think it's quite remarkable to do this trip today and to walk that far. But, in the 25 years that it was running, toddlers walked, grandparents walked, mothers with babes in arms walked. Everybody walked, and it was no big deal. We are certainly capable of that today."

Martin kept a daily journal during his travels (available at trailjournals.com/oregontrail) and plans to write a travel guide for those looking to experience this historic trail for themselves.

"It's not remarkable that I walked the Oregon Trail, because lots and lots and lots of people back in the day walked the trail," he said. "What's a little remarkable to me, is that so few people do it. After the trail went out of use, it was almost immediately forgotten. Parts of it became stage routes or freight roads. A lot of it was forgotten, and a lot of it was plowed up. It should be 2,000 miles of hallowed ground, and remembered, and it's barely remembered in a few spots."

With today's fast-paced world, Martin is here to remind us that it can be nice to remember those who journeyed before us, that we can slow down and enjoy the journey ourselves.

"I would like to see more people have the experience of walking on the Oregon Trail of encountering the weather and the train that the settlers did, and having time to sit and think or walk and think, and maybe develop a different perspective on time, distance and life in general and priorities," Martin said.

Today24.pro
2023 Audi S3 & RS3 Buyers Guide Is it worth it? How does it compare? The Shins Off-Air Performances Chinese Tourist Hot Spot Sanya Imposes COVID-19 Lockdown Troy Deeney: With Haaland and Nunez, Man City and Liverpool are so good it’s a joke… the others won’t get close