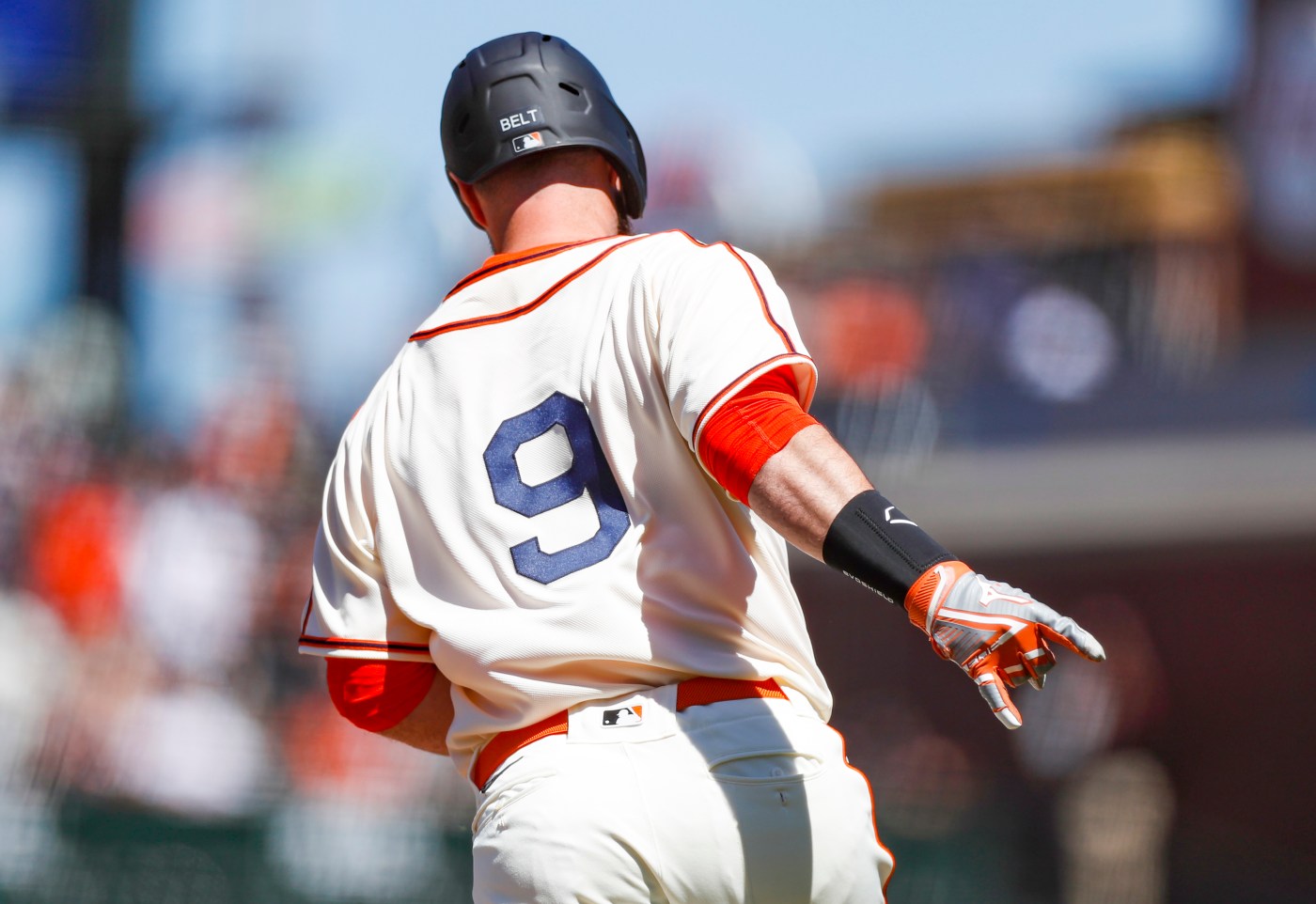 LOS ANGELES — Answering the umpteenth question about his decision to pinch-hit for Brandon Belt late in Friday night’s loss here at Dodger Stadium, Giants manager Gabe Kapler described the type of player that wouldn’t have been lifted.

Those, however, aren’t not the circumstances Kapler and the Giants are working with this season. So, with two outs in the eighth inning, the game tied at 1 and tough left-hander Alex Vesia on the mound, Kapler called on a rookie right-handed bat to pinch-hit for the veteran lefty. Playing his 14th MLB game and making his first appearance in this heated rivalry, David Villar was caught off guard by a Vesia fastball and tapped a meager groundout to second base.

Cody Bellinger’s tie-breaking grand slam came in the bottom half of the inning, sending the Giants to a 5-1 loss.

Belt was left to watch from the bench, before bolting for the exits to beat the postgame fireworks-night traffic. Less than 24 hours later, Belt was back in the lineup against another left-hander, Julio Urías, and reflected on the unsuccessful substitution from the visitor’s dugout.

“Listen, we all have egos,” Belt said. “But at some point, you just have to shed your ego a little bit. … I think that I’m capable of getting the job done right there. I wouldn’t be much of a ballplayer if I didn’t think that I could. I want to stay in every single time. There’s no doubt about that. Every time. It doesn’t matter what the situation is.

“I do understand the reasoning behind it. If I’d been crushing the ball, it wouldn’t have happened. And I’m going to have a lot of opportunities to show that I will crush the ball. That’s kind of how I look at it moving forward.”

It’s no secret that Belt hasn’t been the same masher he was last season. Neither has Crawford. Both players — aged 34 and 35, respectively — have also struggled to stay on the field with various ailments.

And both players are just as aware as you, reader, of their numbers this season. Crawford’s OPS (.629) has fallen more than 200 points from last season (.895); Belt’s is down to .759, from .975 last season, even after a torrid stretch leading in to the All-Star break.

That is why Kapler has had conversations recently with both Crawford and Belt to expect more late, matchup-based substitutions until they turn it around.

“Obviously I haven’t hit my best this year, so I’m a little more understanding,” Crawford said.

“It all comes back to me knowing that I will be who I am by the end of the season,” Belt said. “I will be.”

The loss dropped the Giants 14.5 games back of the Dodgers, the largest gap between the two teams since Kapler took over. Those substitutions certainly stung less when seemingly every button the manager pushed was the right one while battling those Dodgers all the way to the finish line last season, never separated by more than four games.

Kapler has an open-door policy and encourages players to voice their concerns, but he said those conversations haven’t come any more frequently this season. He saw Belt’s comments and appreciated them.

“What a total pro. … Who doesn’t want a player who wants the biggest moment and the biggest opportunity? I just have nothing but respect for how he handled it,” Kapler said. “It’s always going to be fluid. The trust levels are always going to be higher when we have Darin Ruf go out and hit a grand slam. It’s always going to be a little bit lower when you have a young player pinch-hit for a veteran player and he check-swings and hits a ground ball to second base. … During those periods, there is very naturally going to be less trust. And you know what, that’s OK.”

Through those conversations since he arrived before the 2020 season, Kapler has earned the buy-in of veterans who were maybe a bit skeptical. Their historic pinch-hitting success while winning 107 games last season didn’t hurt, either.

“Look at what we did last year,” Crawford said. “I think we’re at a little different point than we were at the start of the season in 2020, where I felt like I had earned a chance to prove myself. … I felt stronger about it then, I guess, than I do now. … I think there are times where it’s smarter and there are times where it doesn’t make as much sense. But (Kapler) has done a great job with it.”

Added Belt: “I’ve talked to him so much, I know he believes in me. I have no doubt that he’s going to give me plenty of chances moving forward. That puts me at ease a little bit knowing that I’m going to be able to show him that I can get the job done. … I know that I’m going to have a lot of opportunities to show that I can do it, and I will do it.”

Rookie under the bright lights

Overlooked by the attention on Belt being pinch-hit for was who entered to do the pinch-hitting.

David Villar’s introduction to the Giants-Dodgers rivalry — and his first experience playing in front of 50,000-plus fans — didn’t go as he would have liked. But he said the opportunity itself was enough to provide a confidence boost.

“That was probably my biggest pinch-hit situation,” Villar said. “It means a lot to me to have that confidence in me as a baseball player to come through and help the team win in that situation, to try to put the team ahead. … I felt like I got a good pitch to hit and I just didn’t put my ‘A’ swing on it.”

That was part of Kapler’s thinking Friday night, too.

“I’d be remiss if I didn’t mention that’s at least a tiny, tiny part of the strategy,” Kapler said. “He’s got a chance to be an everyday player for us for a long time.”

As Villar jogged back to the dugout after grounding out, he got a true welcome to the rivalry.

“Someone said, ‘Go back to the minors!'” Villar said. “But hey, it’s just part of the job. I’m up here for a reason. I’m here to try to help the Giants win games. It is what it is. Just try to come through the next time.”

New Novato restaurant a step back in time

Today24.pro
Athletics give up three more homers, are swept by Giants in Bay Bridge Series The Shins Off-Air Performances How To Get Rid Herpes Virus with Autophagy Fasting? - Natural Treatment For Herpes by Dr. Berg 3 Marinades to try THIS week QUICK + EASY recipe