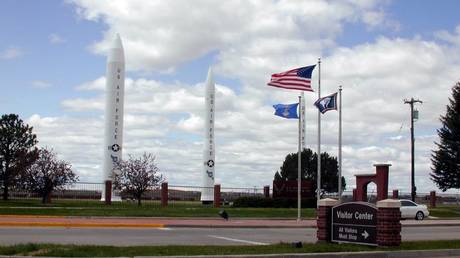 Cell phone towers across the US Midwest were capable of capturing Pentagon communications, the FBI told CNN

The US government has stalled in its efforts to remove Huawei telecom equipment that the FBI claims could have spied on and disrupted communications at US military bases, including those housing nuclear missiles, CNN reported on Saturday.

Amid a broad crackdown on Chinese technology under the Trump administration, Congress approved $1.9 billion in funding in 2019 to remove Huawei and ZTE telecom equipment across the US. However, the Federal Communications Commission (FCC) told lawmakers last week that stripping American networks of this Chinese gear would cost between $4.7 and $4.98 billion.

Much of this equipment remains in place, and although the administration of President Joe Biden has largely continued the efforts of his predecessor, Donald Trump, to purge the US of Chinese communications technology, a Commerce Department probe into Huawei’s activities is progressing slowly, CNN reported.

Meanwhile, this technology may have posed an acute security risk to the US, Reuters reported on Thursday. FCC commissioner Brendan Carr told the news outlet that cell phone towers around Montana's Malmstrom Air Force Base – which controls several missile sites in the US – used Huawei technology, as did two other sites in Nebraska and Wyoming.

The FBI believes that this Huawei equipment was capable of collecting and disrupting Pentagon communications, anonymous sources told CNN. US Strategic Command, the command in charge of the US’ nuclear deterrence and global strike forces, may have had its communications disrupted, the sources added.

It is unclear whether any data was actually intercepted by the Huawei towers, much less whether any was sent back to Beijing. The Chinese government has persistently denied using the country’s tech firms to spy on the West, and Huawei told CNN that all of its products imported to the US meet FCC specifications and are unable to access any communications spectrum controlled by the Pentagon.

"For more than 30 years, Huawei has maintained a proven track record in cyber security and we have never been involved in any malicious cyber security incidents," the company said in a statement.

The accusations come at a time of growing competition between the US and China, with Biden publicly discussing potential military conflict between the two superpowers and FBI Director Christopher Wray warning Western business leaders that Beijing is engaged in “pervasive” espionage and data theft.

Yet while the US’ latest National Defense Strategy names “the [China] challenge in the Indo-Pacific” as its greatest military challenge and seeks to rally its allies into formal and informal alliances against Beijing, the alleged threat posed by Huawei precedes both the Trump and Biden administrations.

As early as the Obama administration, the FBI was monitoring the installation of Huawei routers on cell towers throughout the midwestern states. Sometimes selling its wares at a loss to small US telecoms providers, by 2021 Huawei had its equipment installed on around 1,000 towers, covering an area along the borders of Wyoming, Nebraska and Colorado that is home to a dense cluster of nuclear missile silos.

When the FBI investigated this proliferation of equipment, they found that Huawei weather and traffic cameras had also been installed, and an agency report claiming that this data was sent back to China prompted the 2019 bill ordering the removal of the gear.

Amid US accusals and Chinese denials, Beijing has also claimed that American tech companies are collecting information from within China. Tesla vehicles have been banned from numerous locations in China, including the resort town where the Chinese leadership holds its summer retreat, over concerns that their cameras could be used to capture sensitive data.

I work in Aldi & I have a message for every customer that hates queuing, scowls and moans at us each day