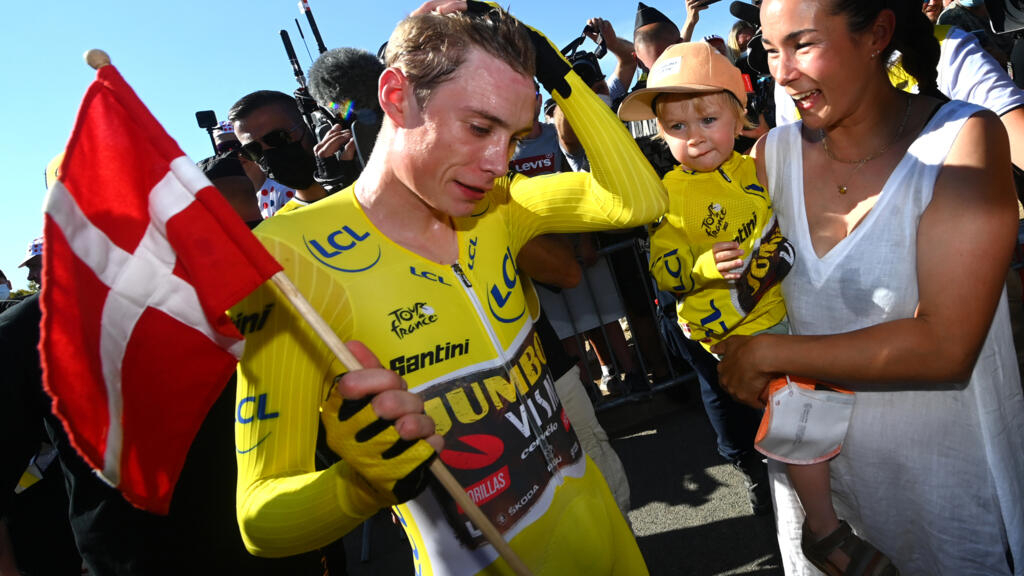 Team Jumbo's Vingegaard tops the overall standings 3min 34sec ahead of two-time defending champion Tadej Pogacar, while Geraint Thomas of Ineos Grenadiers, the 2018 winner, stands third at 8min 13sec. Frenchman David Gaudu of FDJ and Aleksandr Vlasov of Bora round out the top five ahead of Sunday's stage to Paris which is traditionally a ceremonial run. Saturday's time-trial was won by Wout van Aert ahead of his Danish teammate Vingegaard, meaning Jumbo have six stage wins, the yellow jersey, the green sprint jersey and the polka dot climb jersey. Two years ago, Pogacar famously overturned a 57-second deficit on the penultimate day time-trial on La Planche des Belles Filles to snatch victory from Primoz Roglic. But on Saturday, Vingegaard flew down the ramp last of the 139 surviving riders and set a relentlessly high pace through the baking country roads meaning a battle of nerves with Pogacar never really emerged. He did, however, suffer a late wobble, losing his back wheel which slid over gravel into a gutter, but just managed to right himself. "I nearly had a heart attack," Vingegaard admitted. "I grew up, I became a better rider. We are the first Dutch team to do this in 43 years and I'm proud of myself and proud of every rider in the team." The Dane was eight seconds faster than his great rival on the day, and Pogacar looked downhearted at the finish line. "I'm proud of myself, I did what I could, and at least I have the white jersey (best under-25s)," Pogacar said. "I learned a lot, I'll go away and analyse it." Thomas will also be remembered for his under the radar approach that delivered a podium place at 36. "I'm over the moon to be on the podium, people talk about age, but for me it's about mentality, if you eat, train, rest properly you can achieve a lot," said Thomas. Epic struggle "I'll celebrate, but I'll try not to celebrate too much. I can see the end of my career coming and I want to make the most of it." The two main protagonists fought each-other from start to finish with Vingegaard dethroning the two-time champion with a pair of soaring performances in the high mountains. Pogacar made all the early running with his lone wolf mentality, gradually clawing into top spot on stage six with an appearance of invincibility. But the stars aligned against Pogacar when he lost teammates to Covid and injury. He is also a man known to dislike intense heat. Vingegaard took the yellow jersey from Pogacar on stage 11 and while the UAE man refused stubbornly to give up he lost further ground on stage 18. Their epic struggle was highlighted by a moment of sportsmanship when Pogacar fell at high speed and the pretender to his throne waited for him to catch up, the pair clasping hands briefly in a memorable image from one of the best modern editions of the Tour.

Sylvia Fowles' WNBA career is coming to an end, but it's time to celebrate her new beginning