RESIDENTS at a council estate have had their homes invaded by 30,000 vicious bees that live up in the walls and whose buzzing keeps up everyone up at night.

The noisy swarms of the “untouchable” bees have caused misery for renters in Doune House in Bletchely, Milton Keynes, who claim they are exhausted by having to live beside the four huge colonies.

The honeybees are endangered and so can’t be exterminated[/caption]

Photos and videos taken from the estate are straight out a scene from the film Candyman, where producers used thousands of real bees throughout filming and most of the crew wore bodysuits to protect themselves.

But residents in these council-owned flats have no such protection and constantly live in a state of fear of getting stung.

Every time they open their windows hundreds of bees invade, while a dense mat of the creatures sometimes covers the floor of communal areas.

One bee colony has taken up residence beside the communal doors, terrorising people as they enter and leave. 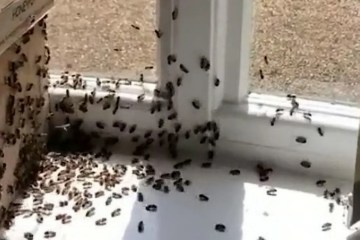 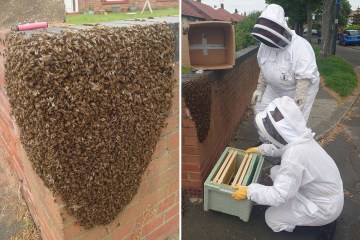 Terror as swarm of 15,000 bees fill residential street and cover a wall in 15 mins

Meanwhile thousands more are living in the wall cavities, keeping residents awake at night with their loud buzzing.

To make matters worse, the nests are so high up on the third floor that no beekeeper can reach them to relocate them and because the bees are endangered, they can’t be destroyed.

The terrifying colonies have returned to Duone House every year for the past four years and residents describe it as living in a nightmare.

“Year after year the bees come back and this year there’s now three hives,” said Kayley Harding, aged 30 years, who lives on the top floor.

She added: “Milton Keynes Council won’t do anything because they’re honey bees and it costs too much money to remove them.

“They’re too high up for beekeepers to collect them so we’re stuck with them. It’s horrible.”

Last year she was stung and had to be rushed to hospital in an ambulance.

Today Milton Keynes Council agreed to temporarily move Kerry and her two young daughters, who are aged four and 10 years.

Kayley said: “The bees are a risk to life. My own daughter has special needs as well as sever skin conditions. She is terrified of them.

“This is only really the start of the bees for summer. We have to keep our windows closed all the time and in this heat is a killer.”

The flats, which are in Torre Close, Bletchley, Bucks., have a communal garden but it is so swarming with bees that the children cannot play out there, said Kayley.

“It’s not fair for me and my neighbours to have to go through this year and year again… If the council can’t move the bees they need to turn these flats into a beehouse and move us residents.

“It’s just not fair that we should be expected to live like this. We know honey bees are important but they are seriously ruining our lives in these flats.”

A beekeeper visited the site and confirmed there were four colonies with an estimated total of 30,000 bees. All the colonies are too high to move, he said.

“He also said that even if all the bees were killed, more would come back and we’d have the same problem again in no time,” said Kerry.

A spokesman for Milton Keynes Council said: “We’re aware of the issue and are looking into solutions to resolve the matter.”

Switch in Time is this week's Eats & Beats rock band

Today24.pro
Lonnie Walker to Lakers SANDCAST: Deahna Kraft only knows one speed, ‘All in, or nothing at all’ McGregor vs. Masvidal chances heating up Europe dominate World swimming and diving podiums