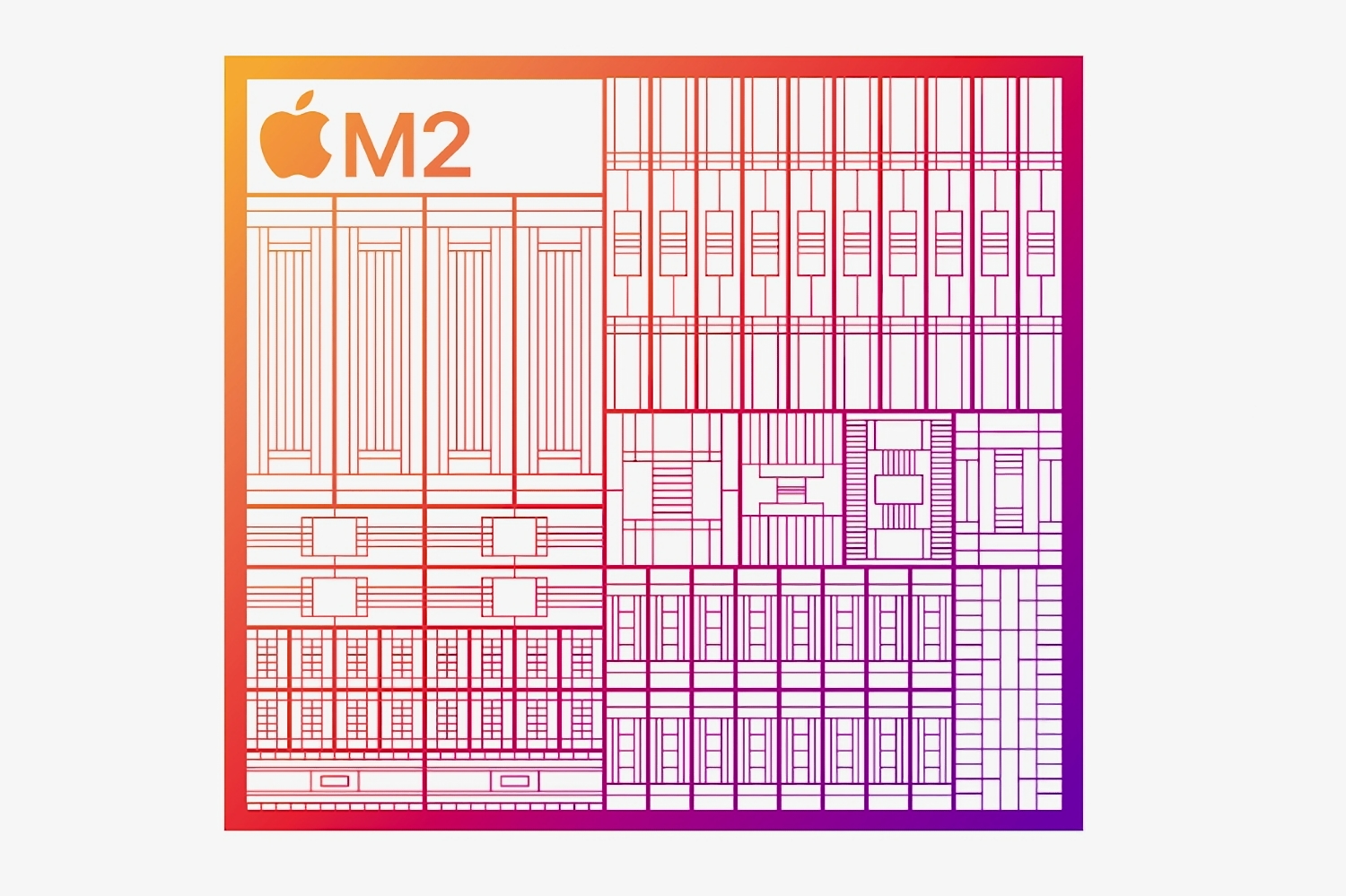 After months–if not years–of fevered theorizing over Apple’s chip roadmap for the Mac, this year’s Worldwide Developers Conference, at last, gave us a tantalizing peek at the successor to the blockbuster M1, released a little over a year and a half ago.

Until it gets into the hands of reviewers and users, we don’t have a lot of solid information about the M2’s performance. What we do know is that the processor at the heart of the new MacBook Air and the new (not really) 13-inch MacBook Pro comes in two options: an 8-core CPU/8-core GPU model on the base-level MacBook Air and an 8-core CPU/10-core GPU in every other configuration. We also know that Apple’s added a higher memory capacity, faster memory throughput, and built-in dedicated video encoding and decoding hardware from the M1 Pro and higher.

But, far more excitingly, now that we’ve got a second data point to work with, we can start to extrapolate a little more about the future of the M2 and when we might expect to see it make its way into the rest of the Mac lineup. (Like any professional writer, I can turn two dots into a line. Don’t try this at home, kids.)

It doesn’t take a crystal ball to see that the M2 is destined for most of Apple’s consumer-level line-up, just as the M1 made its way into the 24-inch iMac and the Mac mini. The real question is whether, as was the case with the M1, Apple chooses to use the same version of the chip in all of those machines.

In the case of the M1, Apple offered a binned 7-core GPU variant in the entry-level iMacs and MacBook Air; this time around, that low-end variant is an 8-core GPU M2, which could be a binned version of the 10-core GPU. (Though it is worth noting that the low-end M2 MacBook Air starts at $200 more than the entry-level M1 Air did.)

Assuming Apple continues on a similar timeframe—and it must be admitted that with the global supply chain in the shape that it is, it’s hard to predict anything with reliability—an M2 iMac is at the very least several months away. The real question is whether Apple will have the capacity to start shipping other M2 Macs this fall or will have to wait until next spring. The iMac’s release date isn’t pegged to a particular time of year and its updates often move around, appearing sometimes in the spring, sometimes mid-year, and sometimes in the fall. But if Apple is only starting to ship its first M2 Macs sometime next month, the fall may be too soon, especially with supply chain constraints. My bet’s on next spring, because when it comes to rumored Apple products, always take the over—products rarely show up sooner than you expect.

There’s also the wildcard Mac mini. When Apple announced the M1 Mac mini at the same fall event as the M1 Air, it also made the choice to leave the high-end Intel Mac mini in the lineup. As it now stands, it and the 2019 Mac Pro are the only Intel Macs that Apple still sells. Much of the speculation around the replacement of that high-end Mac mini has centered on the more powerful versions of Apple’s chips, like the Pro and Max.

The M1 version of the Pro never made it to the desktop. So will that change this time around? As someone who’s very much in the market for an M2-Pro powered desktop, I certainly hope so (heck, it would be nice to see them in an iMac too, even if a larger model still isn’t a going concern). My assessment is that Apple had to prioritize where to put the M1 Pro and M1 Max chips it had available and opted to direct them to the much more popular MacBook Pros and, in the case of the Max, the new Mac Studio.

Like the iMac, a new Mac mini could show up anytime—even if it’s just an M2 version that sits above a cheaper M1-powered model. But looking holistically at Apple’s roadmap, it’s hard to imagine the Mac mini is at the top of the list for updates.

Pro to the Max

What about those Pro and Max versions of the M2? The M1 Pro and M1 Max chips were introduced just under a year after the first M1 Macs, and not only were they a lot more powerful, but they also offered more configurations–especially for GPU cores–than the M1 did. We don’t yet know how the M2 stacks up against the M1 Pro and M1 Max–Apple was, naturally, very hesitant to compare them publicly–but it seems likely that the next-generation Pro and Max chips will see the gains over their predecessors commensurate to what the M2 showed over the M1.

If the timeline continues apace, that would mean that M2 Pro/Max chips will probably not arrive until (alas) next fall, an idea supported by recent rumors about redesigned MacBook Pros. And if they do make the jump to the desktop this time around, I’d still expect Apple to be prioritizing putting them in those MacBook Pros that sell so gosh darn well—probably the same for a speed-bumped Mac Studio too. And of course, there’s still one system hanging out there…

Yes, the Mac Pro. Teased at the same spring event that announced the Mac Studio and its killer M1 Ultra chip, there was some hope that a revised Mac Pro would show up, appropriately enough, at a developer-centric conference. But as it hasn’t, we’re left with an unusual situation: Apple announced in 2020 that it expected to transition all of its Macs to Apple silicon within two years, which it’s done—with the exception of the Mac Pro.

But if the company’s still going to try and ship a new Mac Pro by the end of 2022, there’s little question of what chip will power it: it would seemingly have to be the M1 Ultra. When Apple’s senior vice president of hardware engineering John Ternus unveiled the M1 Ultra, he described it as “one last chip” in the M1 family, which seemingly rules out the possibility of an even more powerful processor.

Certainly, the Mac Pro is not going to have a processor less powerful than the Mac Studio, and given that the M2 isn’t even shipping yet, the Ultra version certainly doesn’t seem like it would be available this soon. So the M1 Ultra it would have to be—or, perhaps more likely, multiple M1 Ultras?

Given that Apple is keeping the M1 Air in the lineup for now, perhaps the simultaneous existence of both chip lines isn’t shocking. After all, it took well over a year for the Ultra version of the M1 to show up and it’s only been around for a few months, which means it’d better continue to earn its worth for all those users who invested in it.

Can YOU see what’s wrong with this image? Just ‘1% of people’ can spot it