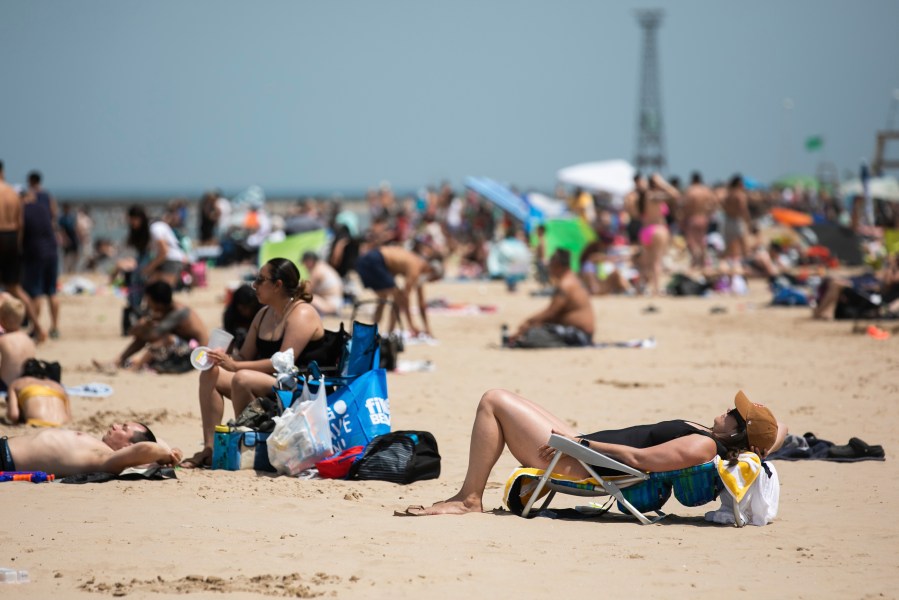 (NEXSTAR) – Chances are if you're reading this, it's going to be hot where you live this week. Meteorologists are warning a heat dome will park itself over parts of the country, pushing temperatures into the 90s and 100s for many cities. More than 100 high-temperature records could be broken this week in cities around the U.S., CNN reports.

The National Weather Service posted a forecast map to Twitter Sunday that shows nearly every corner of the country covered in shades of orange and red, indicating high probabilities of above-normal temperatures. "Colors we have not seen for awhile," the agency said.

The only pockets of the contiguous United States not expected to swelter later this week were parts of New Mexico, Colorado, Montana and North Dakota.

The heat dome was mostly affecting the upper Midwest Monday; the National Weather Service issued Excessive Heat Warnings and Heat Advisories for all of Minnesota, as well as much of neighboring states, putting millions on alert for dangerously high temperatures.

Minneapolis was forecast to reach 100 Monday with a heat index of 107 – conditions so hot they were threatening to buckle roads, the Minnesota Department of Transportation warned. Fargo, North Dakota – a city known for its frigid, snowy winters – was set to reach 98 Monday.

The heat is expected to move south Tuesday, according to Accuweather, to the Midwest, South, and Southeast. Accuweather's meteorologists say it will be so hot and humid in Texas, Oklahoma, Arkansas, Louisiana, Mississippi, and Alabama on Tuesday, that it'll feel as hot as 110 degrees. By Wednesday, Accuweather predicts even more of the Southeast to be mired in hot, muggy weather.

New Orleans, which already broke a daily high record over the weekend, is forecast to reach 100 degrees by the end of the week. Mobile, Alabama is set to reach 103, as is Austin, Texas. The National Weather Service's two-week outlook shows the high heat could stick around all the way up until the Fourth of July holiday.

Man killed after tree falls on truck while driving

The agency warns this much sustained heat can be dangerous for your health. If your area is experiencing extreme temperatures, the Weather Service advises you to seek out air conditioning, stay hydrated and stay out of the sun as much as possible.

Alibaba to digitize the company’s offices to conserve energy