KIM Kardashian put arguably her best asset on display Monday, posing in a bikini at a tropical location.

The reality star showed off her tinier tush, as fans continue to suspect she had her butt fillers removed.

In a series of new pics shared on Instagram, the 41-year-old walked across a white sandy beach and cozied up to a palm tree.

Kim was wearing a silver and black top, and matching bikini brief bottoms that covered much of her rear.

In the first photo, the SKIMS founder looked back over her shoulder at the camera, showing off her slimmed down backside.

Rumors have previously circulated that Kim had undergone a Brazilian butt lift to obtain her signature booty. 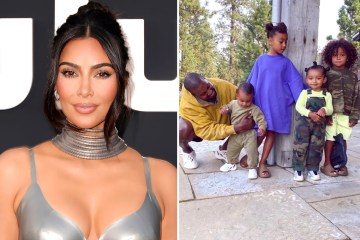 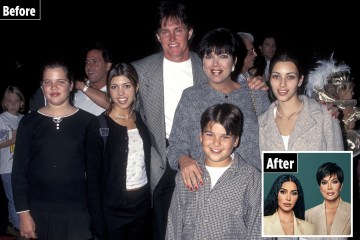 Others weighed in online with their thoughts, questioning if Kim’s seemingly shrinking backside is because she got her fillers removed.

In August, fans wondered about her less shapely bum after the star shared a picture of her in tight leggings holding Psalm, her youngest son with ex husband Kanye West.

The difference didn’t escape fans, with one asking: “Did you shrink your bottom?”

Others wrote: “I swear her bum looks so different” and: “What happened to her booty?”

Meanwhile, a surgeon told OK! magazine: “Something has been removed. Either she has had butt implants taken out or she has had filler dissolved or liposuction to reduce the size of her bottom.”

Mark Ho-Asjoe explained: “The main difference with Kim’s bottom is the emptiness at the top compared to photos of her before.”

In 2016, after years of denying that she had had her buttocks cosmetically enhanced, Kim finally admitted that she indeed had butt injections.

Kim confessed she still has cortisone shots to treat psoriasis, which was first spotted by her mom, Kris Jenner, 66, when she noticed a rash on her daughter’s legs as a teen.

This has led to speculation that she has butt implants because she was left with a dent in her rear end after the first cortisone injection.

Kim has also admitted to taking drastic measures to slim down.

She recently revealed she lost 16 pounds in three weeks to fit into Marilyn Monroe’s iconic dress for the Met Gala in May.

She told Vogue on the red carpet: “I tried [the dress] on and it didn’t fit me. I said, ‘Give me three weeks.’

“I had to lose 16 pounds down today. It was such a challenge. It was like a [movie] role. I was determined to fit [into] it. I haven’t had carbs or sugar in about three weeks.”

And now her famous family is reportedly worried about how recent weight loss.

The KUWTK star has allegedly been juggling a long-distance relationship while dealing with the struggles of a single mother and running her businesses – all at the same time.

“Kim looks amazing, always, but she’s good at keeping how stressed she is hidden,” an insider tells The Sun.

“She’s the skinniest she’s ever been and barely sleeping. Her family knows that a lot of this is her rebounding from a very controlling marriage, and her determination to show Kanye how much better she is doing without him.

“But whereas before she was incredibly healthy and well-rested, now she’s constantly jetlagged and she’s finding it hard to fit workouts in. I think Kim’s really struggling but won’t admit it.”

Today24.pro
Royals vs. Athletics Friday game thread Eblen knew he would beat Mousasi at Bellator 282: ‘I expected it’ Canelo Alvarez blasts ‘a**hole’ Gennady Golovkin as he prepares for third fight with boxing rival A 757-acre Scottish island that comes with a mansion and a whale skeleton nicknamed 'Bony Dick' is on sale for just over $2 million