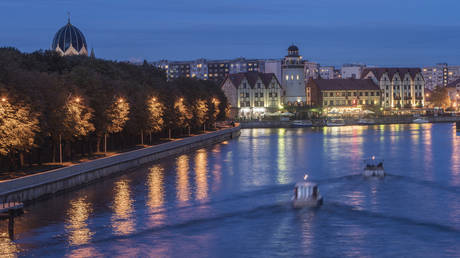 Lithuania’s Foreign Ministry on Monday handed a note to Moscow’s chargé d’affaires in the country explaining the application of EU sanctions on the transit of a number of goods between mainland Russia and Kaliningrad, a Russian exclave nestled between Poland and Lithuania.

Vilnius insists that it has not outright banned transit between the exclave and the rest of Russia and has not introduced any additional restrictions. Lithuania maintains that the transit of passengers and goods not subject to EU sanctions will continue through its territory as usual.

“Lithuania has not imposed any unilateral, individual, or additional restrictions on the transit. Lithuania has consistently implemented EU sanctions, which have different transition periods and deadlines for entry into force,” read the note.

Earlier, Lithuanian Foreign Minister Gabrielius Landsbergis stated that the decision to impose these restrictions was made by Vilnius after consulting with the European Commission and was implemented under its guidance.

Lithuania’s state railway service, LTG Cargo, which operates the only overland rail route that links Kaliningrad with mainland Russia, announced on Saturday that it will no longer allow the transit of EU sanctioned goods through its territory.

The service cited a clarification from the European Commission stating that if sanctioned goods and cargoes travel from one part of Russia to another, but through the territory of the EU, their transit should be prohibited.

Russian authorities have since slammed the move as an ‘economic blockade’ of Kaliningrad Region. Kremlin spokesperson Dmitry Peskov noted on Monday that Vilnius’s decision was “unprecedented” and “a violation of anything and everything.”

Russian Foreign Ministry spokeswoman Maria Zakharova stated that Vilnius’s “provocative” actions are a violation of the country’s international legal obligations to allow the transit of cargo between Russia and Kaliningrad. She said that Russia sees this move as “openly hostile” and that unless Lithuania immediately lifts these restrictions, Russia reserves the right to “defend its national interests.”

Meanwhile, the head of Russia’s commission for the defense of state sovereignty, Andrey Klimov, has argued that Lithuania’s move was an act of “direct aggression” against Moscow and that unless the EU brought its member state to heel, Russia would have a free hand to “solve the problem of the Kaliningrad transit created by Lithuania by ANY means chosen by us.”

According to Kaliningrad Governor Anton Alikhanov, who warned of Vilnius’s intentions on Friday, the new restrictions, which ban the transit of goods such as coal, metals, construction materials and advanced technology, will affect nearly 50% of all cargo flow to the region.

About Those Devastating Deaths in Stranger Things Season 4

Today24.pro
Christian Thun faces Curtis Harper on July 9 ProBoxTV card in Florida SANDCAST: Deahna Kraft only knows one speed, ‘All in, or nothing at all’ Lonnie Walker to Lakers Athletics’ Adrian Martinez will get starting assignment in Seattle