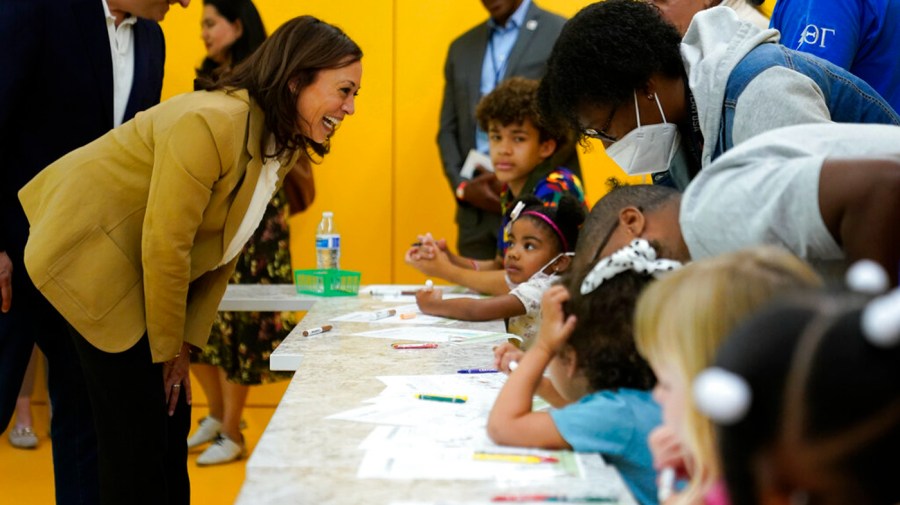 Vice President Harris made an unannounced visit to the National Museum of African American History and Culture on Monday to meet with a group of children to mark Juneteenth.

Harris, who was greeted with a round of applause from the surprised room, spoke about the need to celebrate the principle of freedom on Juneteenth, the federal holiday marking the end of slavery in the United States.

“Happy Juneteenth, young leaders!” Harris said. “Today is a day to celebrate the principle of freedom. And think about it in terms of the context of history, knowing that Black people in America were not free for 400 years of slavery, but then at the end of slavery – right? – when that declaration happened, when the Emancipation Proclamation happened, that America had to really think about defining freedom.”

“Is freedom given to us or are we born with freedom?” the vice president continued. “I would argue it is our God-given right to have freedom. It is your birthright to have freedom and during slavery freedom was taken. And so, we’re not going to celebrate being given back what God gave us anyway. And that’s important to remember.”

Harris was joined by her husband, second gentleman Doug Emhoff, who called the museum his “favorite place” in Washington, D.C. The two walked around the room to visit with the children.

The White House’s public schedule was light Monday with the observance of Juneteenth. President Biden was spending the day in Rehoboth Beach, Del., with family before returning to Washington.

Biden signed legislation last year making Juneteenth a federal holiday. The holiday marks the day in 1865 when enslaved African Americans in Galveston, Texas, learned that they were free.

Biden released a statement on Sunday describing the day as one of “profound weight and power” and emphasized his administration’s commitment to advancing equity and racial justice in the United States.

“This is a day to celebrate, to educate, and to act,” Biden said. “As we mark Juneteenth, my Administration will continue our efforts to root out inequity from our country and institutions and ensure true liberty and justice for all.”

The Sin Bin • Re: Brexit disaster

Today24.pro
SANDCAST: Deahna Kraft only knows one speed, ‘All in, or nothing at all’ Lonnie Walker to Lakers McGregor vs. Masvidal chances heating up Europe dominate World swimming and diving podiums