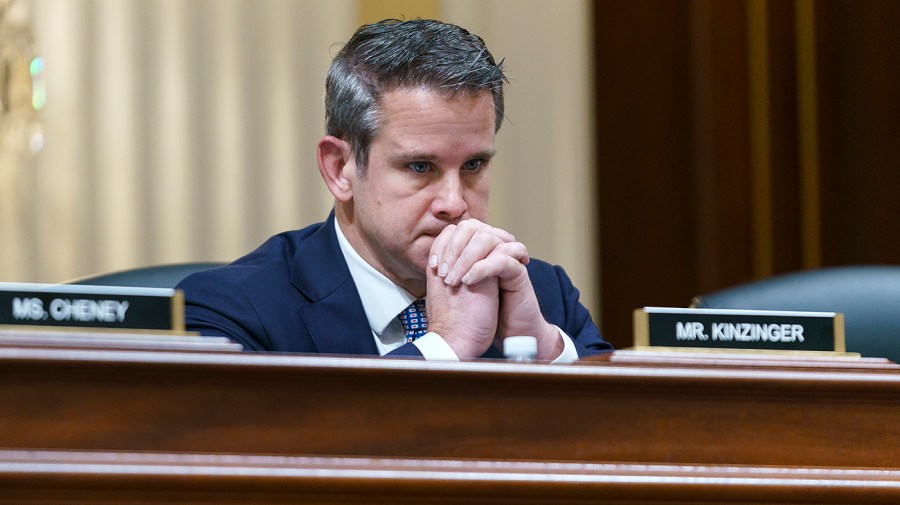 Rep. Adam Kinzinger (R-Ill.) on Sunday shared a death threat his family received over his participation in the House committee's investigation of the Jan. 6, 2021, insurrection.

Kinzinger took to Twitter to share the letter that was mailed to his home and addressed to his wife, Sofia.

The letter threatened to harm the Illinois Republican and threatened his wife and child as well.

He warned of the possibility of "violence in the future" and told ABC’s "This Week" host George Stephanopoulos that he isn't worried about the threats to him.

"I'm not worried personally. ... It threatens to execute me as well as my wife and 5-month-old child," he said.

"I've never seen or had anything like that. It was sent from the local area. I don't worry, but now that I have a wife and kids it's a little different. There are people that — there's violence in the future, I'm going to tell you. And until we get a grip on telling people the truth, we can't expect any differently."

Kinzinger, who along with Rep. Elizabeth Cheney (R-Wyo.) is one of two Republicans who serve on the committee, also alluded to his belief that Republican National Committee is encouraging threats against lawmakers.

"The Darkness is spreading courtesy of cowardly leaders fearful of truth,” he said in his tweet linking to the letter.

Kinzinger, who is not running for reelection, also told Stephanopoulos that he was very concerned about the 2024 election. "Wake up, America. Wake up, Republicans, because this is not going to be good for you if you think it is," Kinzinger added.

His comments came just days before the Jan. 6 panel is set to hold is fourth hearing that will focus on former President Trump's efforts to pressure state officials in the aftermath of the 2020 election results.

The Washington Post reported that election administrators in at least 17 states received threats of violence in the months after the Jan. 6 attack, as a direct result of comments from Trump.

Kinzinger shared the death threat a day before Missouri Senate candidate Eric Greitens (R) shared a controversial video urging his supporters to go "RINO hunting" and renewed the conversation around violence and threat against elected representatives. Greitens has been criticized for alluding to hunting humans in the video.

Rep. Zoe Lofgren (D-Calif.) told CBS’s "Face the Nation" host Margaret Brennan that while she "didn't want to go into the threats" she received it was "concerning" that Kinzinger and his family were threatened.

"But it's very concerning that Adam and his wife and his little baby were threatened. I saw the threat. It was a written threat," she added.

The Hill has reached out to Kinzinger for comment.

Today24.pro
Canadian Wood Council mass timber fire test performed as expected SANDCAST: Deahna Kraft only knows one speed, ‘All in, or nothing at all’ Billam-Smith vs Chamberlain set for July 30 in Bournemouth McGregor vs. Masvidal chances heating up