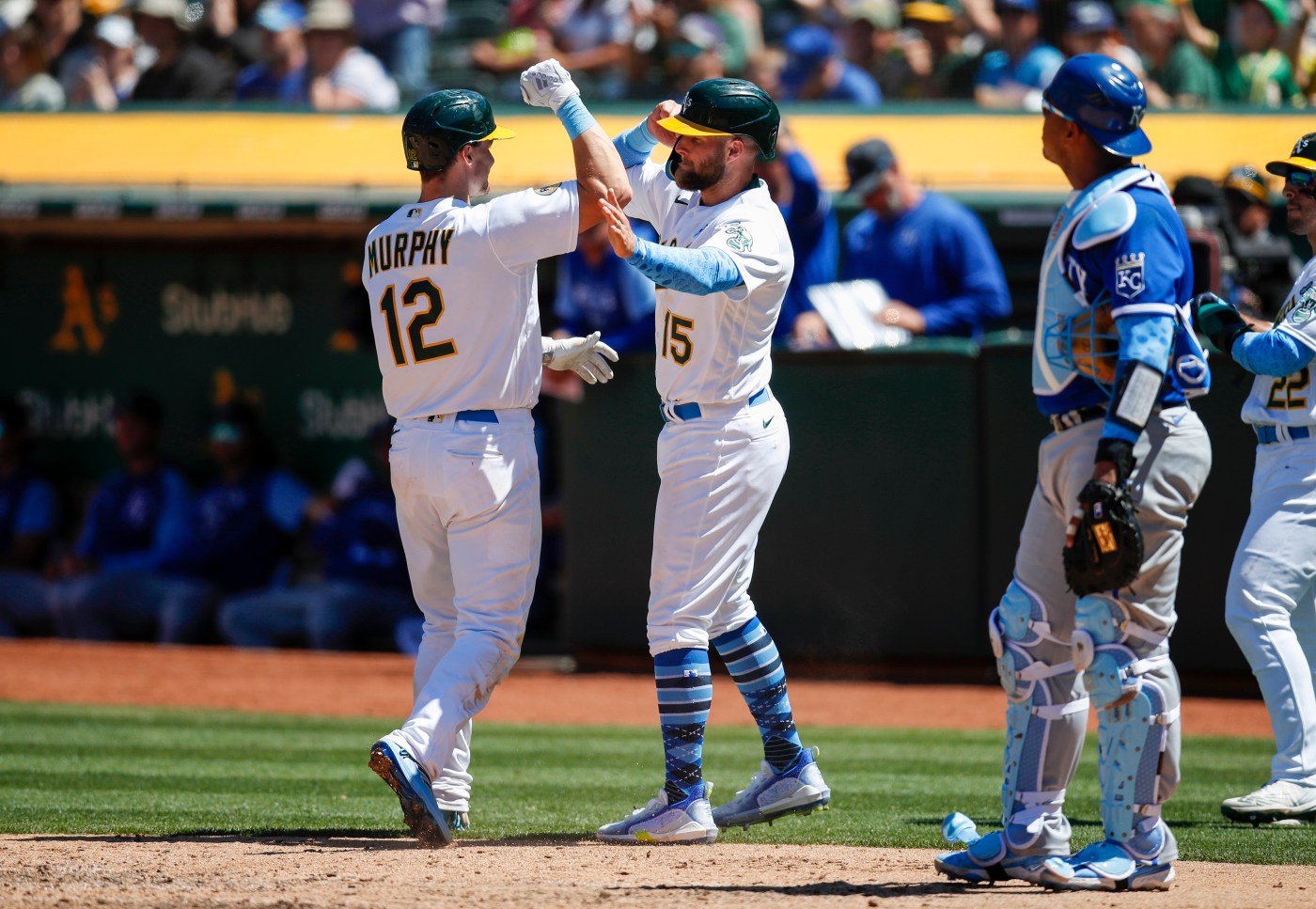 OAKLAND – Maybe this was the spark that both Seth Brown and Sean Murphy needed.

Both Brown and Murphy’s bats came to life Sunday, providing all of the offense the A’s would need in their 4-0 win over the Kansas City Royals at the Coliseum.

Now the key for both players is to keep it going and help the A’s turn around what’s been a disastrous June. Sunday’s win was just the A’s third in 16 games this month as Oakland entered Monday at the bottom of Major League Baseball’s overall standings at 23-45.

The A’s are off today and begin a three-game series at home against the Seattle Mariners on Tuesday.

Both Brown and Murphy bounced back Sunday afternoon from rough patches – specifically at home.

Brown had not hit a home run at the Coliseum since Aug. 8, 2021, but he went the opposite way for a first-inning solo homer off Royals pitcher Brady Singer on Sunday. The hit snapped his 0-for-8 streak and he now has nine home runs this season, with four of them being solo shots. It was a nice bounce-back effort from Brown, whose aggressive play in left field Saturday turned a single to a triple from Michael A. Taylor, who scored the Royals’ game-winning run one batter later.

“Seth works as hard as anybody else. He’s the type of guy who comes in first and leaves last. That’s the type of guy he is,” Murphy said. “It’s always one of those things where he’s never going to let himself spiral because he always just he’s going to work through it.”

Murphy’s .143 batting average at home before Sunday was the worst among all qualified MLB players. But after a day off Saturday, he went 3-for-4 with a double and a three-run homer to left field, ending an 0-for-6 slump and helping the A’s avoid being swept by the Royals for the first time since 2015.

“Anytime you’re not performing to the level that you want to, it’s hard not to focus on that offensive side or to carry it with you,” A’s manager Mark Kotsay said of Murphy. “The numbers are glaring up on the scoreboard. It stays there all day every day and these guys know that they’re scuffling.”

It makes a big difference to the A’s when Brown and Murphy can provide some power.

On June 11 in Cleveland, Murphy and Brown homered – Brown had a go-ahead grand slam – to lead the A’s to a 10-5 come-from-behind victory. It’s evident to Kotsay that when key players like Brown and Murphy are swinging well, it provides a jolt for this team.

“Anytime you have two players in your lineup that are swinging the bat well and provide the offense, it’s a good feeling for both those players,” Kotsay said. “We’ve been talking about the approach through the middle and utilizing the whole field and I think both of them really followed the approach today.”

The A’s will be enduring a grueling stretch heading into the All-Star break with 16 of their next 25 games against division rivals like the Mariners, Rangers and Astros. Oakland also has games with the Yankees and Blue Jays.

Murphy hopes to carry what he did Sunday, when he helped the A’s record their first shutout victory since May 11 against Detroit, going forward.

“It’s good to get a crooked number,” Murphy said. “We haven’t been doing that a lot recently. So just to jump out to a little bit bigger lead and give the bullpen a little bit more room to breathe was what was important.”