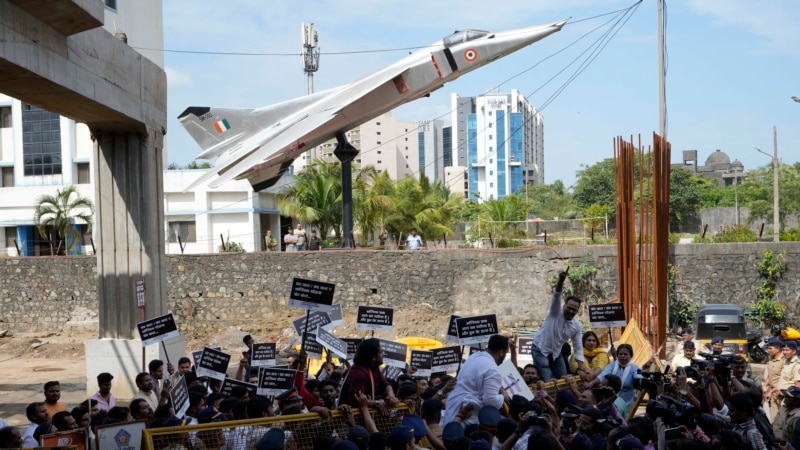 India canceled more than 500 trains nationwide Monday and disrupted internet service in 20 districts of eastern Bihar state following protests over a new military recruitment plan. The protests erupted across the country last week when Prime Minister Narendra Modi’s Bharatiya Janata Party-led government announced an Agnipath (“path of fire”) scheme to recruit men and women ages 17 to 21 for the armed forces on four-year contracts. Until now, new noncommissioned recruits have served for an average of 17 years. India said Monday registration for recruitment will begin in July. The protests against the recruitment scheme also saw youths set at least a dozen passenger trains ablaze, vandalize government offices, buses and police vehicles and burn tires on highways, blocking those roadways in many states. Many of the protesters were young men who aspired to pursue military careers as a path out of poverty. They carried Indian flags and shouted, “Roll back Agnipath. We don’t want short-term jobs. We want permanent jobs.” The protests rapidly spread after it was initially announced that recruitment would begin this month. Violence reached Uttar Pradesh, Bihar, Rajasthan, Haryana, Uttarakhand, Jharkhand and other states. The protesters fought pitched battles with security forces in many states and at least one youth was killed when police fired on demonstrators who set fire to a passenger train in the southern state of Telangana. While protesters across the country have mainly been young men, in New Delhi some women, mostly from leftist student organizations, also have taken part, demanding a rollback of the recruitment scheme. A middle-aged passenger died, apparently of a stress-triggered heart attack, after protesters set a train ablaze in Bihar. Short-term recruitment scheme Under the plan, about 46,000 soldiers will be recruited annually, and at the end of the four-year tenure 25% of them will be retained for longer terms, while the rest will be forced to retire, the government announced. Those who lose their jobs after the four-year contract will be offered a lump sum of 1.1 million rupees ($14,100), but unlike other retired armed forces personnel, they will not receive any other pension benefit. Many youths who are training in hopes of joining the armed forces said that if they join the military, they want to be in the job until they retire and do not want to be jobless again after four years. They are demanding that the government cancel the Agnipath scheme and resume recruitment through traditional methods. With 1.4 million personnel, India’s armed forces make up the world’s second largest, after China. Every year, 50,000 to 60,000 young men join the forces in search of long-term jobs. There had been no army recruitment in the past two years because of the pandemic. Women are employed mostly in noncombatant roles in the armed forces and 3% to 6% of those joining are women. In many locations, the protesters directed their anger at the BJP. In Bihar, which has witnessed the most widespread violence in recent days, protesters vandalized and burned BJP offices and the homes of senior party leaders, including state BJP chief Sanjay Jaiswal. Protesters used stones to pelt police, who fired tear gas shells at them. Images aired on television showed that in many places, police, who were far outnumbered by protesters, did not act against the youths and were even chased away by the stone-throwing demonstrators. A police officer from Samastipur in Bihar told VOA that the situation was “beyond our control.” “The protesting men are targeting public properties, and they are thousands in number. We are just a few hundred at the most. Their number seems to be swelling,” said the officer, who asked not to be identified because he is a junior officer and not allowed to speak to the media. In addition to Bihar, authorities suspended internet service in Haryana to try to curb the spread of protests. Elsewhere, in the Aligarh district of northern Uttar Pradesh, a BJP-ruled state, protesting youths vandalized and torched a police outpost. Opposing views While announcing the Agnipath plan, Defense Minister Rajnath Singh said it was designed “to strengthen the security of the country.” “The Agnipath scheme is a truly transformative reform which will enhance the combat potential of the armed forces, with [a] younger profile and technologically adept soldiers,” Singh tweeted. Opposition leaders, military veterans and even some leaders of Modi’s ruling BJP said the plan would lead to more unemployment in the country where joblessness is already a crisis. They have urged the government to review the scheme. A youth from the Bettiah district in Bihar told VOA that the protesters would not rest until the government rolled back Agnipath. “For the past three years, I have been training very hard to join the army. But I want a guarantee to be in the job for 20 or 30 years, if I succeed. I never want to be forced to retire after four years and be jobless again,” Pramod Kumar, 20, said.