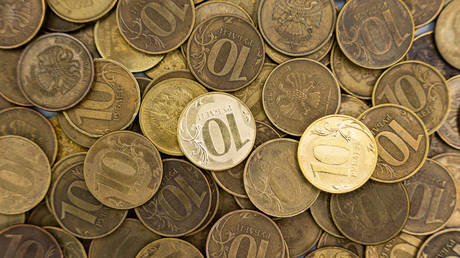 The ruble soared on the Moscow Exchange on Monday, reaching a new multi-year high against the US dollar. The rally comes despite the Central Bank suggestion last week to scrap capital controls that have supported the currency in the face of international sanctions.

The Russian currency briefly dipped to 55.44 rubles to the dollar on Monday, its strongest exchange rate against the US currency since June 2015, later retreating slightly. The ruble was also trading just above 58 against the euro, also close to a seven-year high.

After falling to record lows in early March due to the pressure of Western sanctions, the currency recovered thanks to support from capital controls and Russia’s strong trade account, economists say. Last week, however, the head of Russia’s Central Bank called for a lift on most capital controls in an effort to weaken the ruble.

The government believes that the Russian currency is too strong at the moment, with some officials suggesting weakening it to between 70 and 80 rubles per dollar. The Central Bank and the Audit Chamber, however, have spoken out against the currency interventions and support the current policy of regulating the inflation rate.

Earlier this month, the Central Bank slashed its key rate to the pre-crisis level of 9.5%, noting that inflationary risks for the country continue to subside. The rate had been hiked to 20% after Russia was hit with a barrage of sanctions by the US, the EU, and their allies in late February.

The accelerated recovery of the ruble has also been attributed to rising energy prices in the international markets and Moscow’s gas payment demand, requiring ‘unfriendly’ countries to pay for supplies in Russian currency.