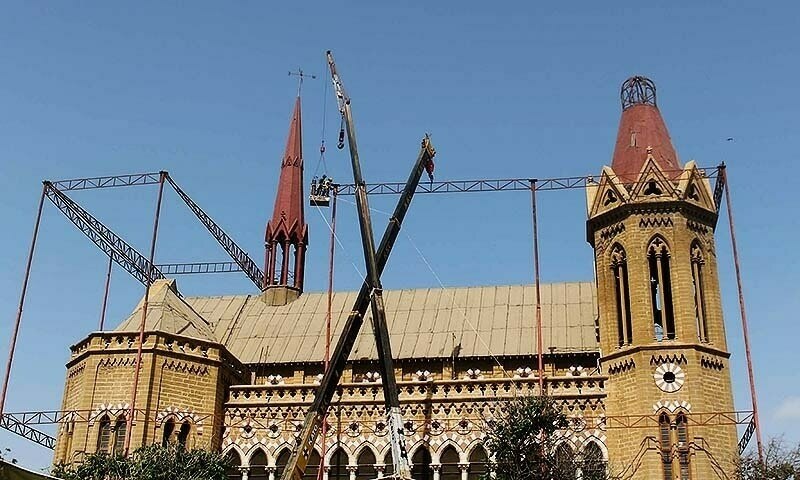 The Sindh High Court (SHC) on Monday ordered "immediate demolition" of recently erected concrete structures at Frere Hall after it emerged that the Karachi administration was purportedly constructing a new gate at the city landmark.

The SHC expressed anger at the new erections at Frere Hall and other heritage sites. Issuing a show-cause notice to Karachi Administrator Murtaza Wahab, the court also suspended his "intrusion" in any heritage building or city site.

The court also ordered the demolition of the under-construction gate at Frere Hall, observing that damaging historic sites and cultural heritage was "intolerable".

On Sunday morning, members of civil society along with representatives of the Institute of Architects, Karachi chapter, had held a protest at Frere Hall Gardens over the construction of the gate and fence on the Abdullah Haroon Road side of the Hall.

Chanting slogans against the 'poor' decision of building gates, protesters held up banners and placards in red with the words ‘No Fence’ and ‘Say No to Frere Hall Gate’ written in bold black.

All were of the view that the park was a historic landmark of the city and its architectural elements should be conserved.

“Frere Hall is one of the most democratic, interactive and well utilised public spaces for all classes in Karachi. The neoliberal decision of fencing, gate installation, arching is an act of obstruction,” Mazhar had said.

Other protestors were also of the view that the Frere Hall Gardens served as a public space that has been open and welcoming to the citizens of Karachi. The aesthetics of the ongoing structures are not aligned with the architecture of the hall and they requested restoration and preservation of the original features of Frere Hall Gardens.

However, Wahab had denied that a gate was being installed.