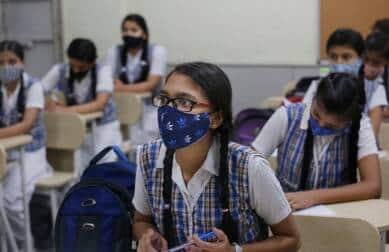 State School Education Minister Anbil Mahesh Poyyamozhi announced the results of the Board examinations held in May, in the presence of school education department officials here. As in the past, girls outshined the boys this time too.

The first board exam (tenth standard) for the outgoing batch of Class 12 and also their Class 11 exams were cancelled due to COVID-19 since the last two years and they were declared “all pass.” The academic year commenced rather late and they had to shift to offline classes in September.

This batch took the exams amidst apprehensions of spike in Coronavirus cases and strict compliance of COVID-19 norms. As per the results, girls performed better than boys registering 5.36 percentage in Class 12 exams and 8.55 percent of them in Class 10 exams.

About 47 students scored centum in language paper in Class 12 exam, while 4 scored 100 marks in English paper. Among the districts, Perambalur topped the chart with 97.95 pass percentage followed by Virudhunagar: 97.27 and Ramanathapuram: 97.02 pass percentage.

In 2019, the pass percentage recorded was 95.2, which is higher than this year. Only one student in the entire state managed to score centum in Tamil paper while a total of 65 candidates scored above 495 marks.

Kanyakumari district topped the state in scoring the highest pass percentage of 97.22 percent, followed by Perambalur with 97.15, Virudhunagar: 95.96 and Madurai: 95.09.

Speaking to reporters, Poyyamozhi said the government would conduct re-exam for Class 12 in July to enable them to enroll in colleges for the upcoming academic year. Provisional marksheets will be made available for the students on June 24, he said.

Students could call the toll free helpline numbers: 14417 and 1098 for any queries or concerns, the Minister said.

Today24.pro
Canadian Wood Council mass timber fire test performed as expected Lonnie Walker to Lakers SANDCAST: Deahna Kraft only knows one speed, ‘All in, or nothing at all’ Europe dominate World swimming and diving podiums