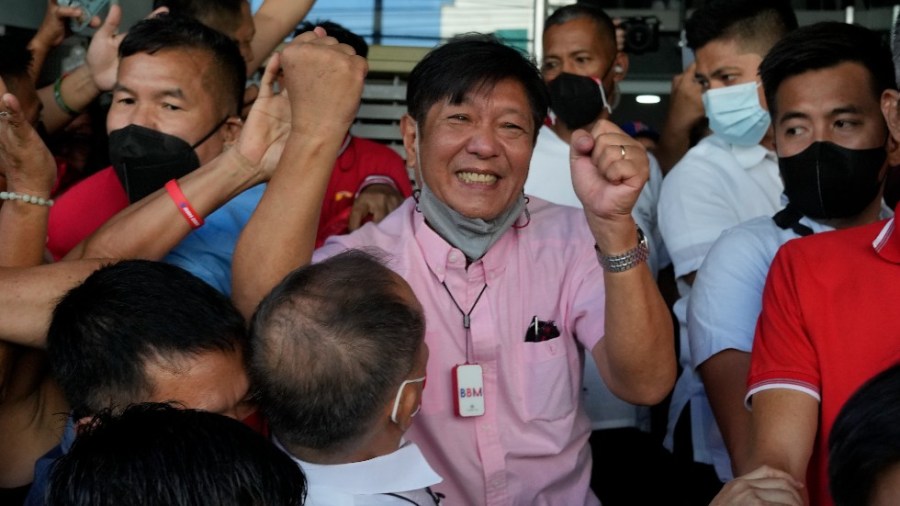 The overwhelming victory of the namesake son of the late Ferdinand Marcos to a six-year term as president of the Philippines confronts U.S. diplomats and policymakers with an extremely tricky puzzle: how to begin to reconcile with the heir to a corrupt dictator in whose downfall the U.S. was complicit. And how can they hope to draw the Philippines away from China, with which the outgoing President Rodrigo Duterte has been cozying up for six years?

The bond between Marcos and Duterte means that China has a grip on both the Philippines’ ruling families. Duterte, barred from running for a second term by the constitution imposed after the downfall of Marcos Sr., has ensured power through his daughter. Sara Duterte, mayor of Duterte’s stronghold, Davao, the Philippines’ second-largest city on the southern island of Mindanao, was elected on a separate ticket as vice president by nearly 4-to-1. Between them, Marcos Jr. and Sara Duterte are standing firm against the pro-American proclivities of Maria Leonor “Leni” Robredo, the activist lawyer whom Marcos defeated for president by a margin of more than 2-to-1 after having lost to her in the race for vice president six years earlier.

“The victory of Ferdinand ‘Bongbong’ Marcos, Jr.  is based, fundamentally, on the classic north-south dynastic alliance needed to carry a Philippine presidential campaign to victory,” Alfred McCoy, University of Wisconsin historian who has written extensively on the Philippines, told me. “Bongbong teamed up with Sara Duterte, whose dynasty brought along the Cebuano south of the Central Visayas and Mindanao.”

Intensive internet campaigning dispelled memories of the dictatorship of Marcos Sr. “With the old media of newspapers and broadcasting giving way to the internet,” said McCoy. “Bongbong’s army of trolls and video-loggers wiped away the bitter memory of old Marcos Sr.’s martial law regime, mired in corruption and brutality, to represent it as a veritable Golden Age of order and progress.”

If Washington has never had a problem compromising principles for the sake of national interest, the Philippines is a special case. During the People Power Revolution of 1985-1986, which I covered for USA Today, American diplomats, politicians and military people played a major role in getting Marcos out of town. I saw the helicopters carrying Marcos, his wife Imelda, his family, including Fernando “Bongbong” Marcos Jr., his daughters Imee and Irene, and cronies with bags full of money, gold and jewelry from Malacañang Palace to Clark Air Base north of Manila, whence two U.S. Air Force planes carted them all to Honolulu. President Ronald Reagan had told him it was time to go, and Nevada’s Sen. Paul Laxalt in a phone call advised him to “cut cleanly.” The CIA is assumed to have played a central role.

Can Washington reconcile this background with Bongbong, or “BBM” as he’s known in the headlines, while Imelda, who’s still highly visible at 92, and Marcos Sr., who died at 72 in Honolulu in 1989, remain the targets of an unpaid judgment from the U.S. District Court in Hawaii that amounts to $353 million for contempt in cases involving human rights? That’s to say nothing of another $2 billion that the court, in a gesture of futility, ordered divided among 10,000 human rights victims. Then there’s more than $4 billion owed in taxes to the Philippines, plus a plethora of lawsuits demanding some of the billions the Marcoses are believed to have squirreled into accounts in Switzerland and elsewhere.

The need to avoid judgments in the U.S. means it’s safe to assume Bongbong won’t be visiting the U.S. anytime soon, much less meeting President Biden in Washington. Theoretically, he could be arrested and ordered to pay up, but that’s not all that will keep him away. He’s also expected to follow in the footsteps of Duterte and downgrade the historic Philippine-American alliance in the interests of appeasing China.

Bongbong, now 64, has been right behind Duterte, who announced nearly six years ago “my separation from the United States, both in military but economics also.” Duterte showed he meant what he said by disparaging a ruling by the International Court of Justice at the Hague invalidating China’s claim to the entire South China Sea, including islets in the Spratlys to which the Philippines clings, and the Scarborough Shoal in fish-rich waters west of Olongapo, once the home of America’s largest overseas naval base. China rejected the proceedings, and Duterte said the decision was “just paper” that he would “throw away.”

Bongbong could not agree more. In interviews this year he said the ruling from the Hague was “ineffective”and that he would look for bilateral deals with Chinese diplomats whom he has befriended. He knows where to find them. China in 2007 opened a consulate in Laoag, capital of Ilocos Norte, the Marcos family stronghold where he served as governor before moving to the Senate in 2013. The fact that China chose Laoag, population slightly more than 100,000, as the place for a consulate suggests the bond between Marcos and his contacts in China, which he visited frequently in his days as governor and senator.

Bongbong and his sister, Imee, like millions of their countrymen, also have U.S. ties, including studies at Ivy League institutions. Bongbong took courses at the University of Pennsylvania’s Wharton School but did not receive a degree. His sister Imee was at Princeton for two or three years but never graduated. Her record at Princeton contrasts with that of Maria Ressa, who graduated in 1986 and co-founded Rappler, a harsh critic of the Duterte-Marcos machine, which made her a special target for abuse after she won the Nobel Prize last year.

U.S.-Philippine relations, however, extend from the defeat of Spanish rule to the American colonial era, giving rise to the line that the Philippines owes its special qualities to “350 years in a convent and 50 years of Hollywood.” In March, nearly 9,000 U.S. and Philippine troops joined forces in the largest military exercises in seven years. Known as Balikatan for “shoulder to shoulder,” the live-fire war games showed the Philippines unhappiness about incidents in which Chinese vessels had intruded into Philippine waters and threatened fishing boats.

Bongbong, however, prefers gentle diplomacy to shows of force. “We will explain to China that our vessels are not a military threat,” he said during the campaign. No way, while negotiating with the Chinese, will he support U.S. claims that the South China Sea is open to everyone, including U.S. warships.

Donald Kirk has been a journalist for more than 60 years, focusing much of his career on conflict in Asia and the Middle East, including as a correspondent for the Washington Star and Chicago Tribune. He currently is a freelance correspondent covering North and South Korea. He is the author of several books about Asian affairs.