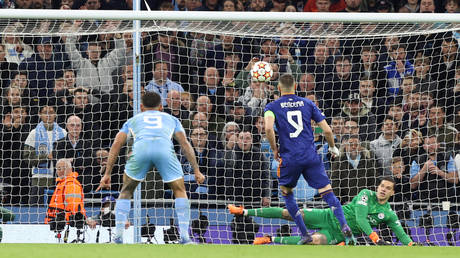 In one of the elite competition's most thrilling knockout ties of all time, City prevailed 4-3 but were constantly pinned back by the 13-time winners and their never-say-die attitude spearheaded by the likes of Benzema and Luka Modric.

When Kevin De Bruyne and Gabriel Jesus put the Mancunians 2-0 up at the Etihad after just 11 minutes, Benzema pulled one back with a clever no-look sidefooted volley past the half-hour mark.

Karim Benzema wasn't even looking at the goal ???? pic.twitter.com/10bFJiUTSb

While England international Phil Foden then made it 3-1 with a thunderous header, Vinicius Junior kept Madrid in the fight with a clever nutmeg of compatriot Fernandinho prior to Bernardo Silva firing the Premier League leaders 4-2 to the good with just 15 minutes to spare.

But setting up what is sure to be an intriguing second meeting at the Bernabeu a week from now, Benzema notched his 14th goal of the current Champions League campaign in the coolest of fashions.

Feeling no pressure whatsoever, he trotted up to his 82nd-minute penalty with the confidence of a veteran in the form of his life and on the cusp of winning the Ballon d'Or by chipping a cheeky Panenka past Brazil shotstopper Ederson to guarantee that the night finished 4-3.

⚪️ Another Benzema highlight of the season, captured from the stands by @TheHasKarim!

The effort was immediately dubbed the "perfect" spot kick, and "absolutely outrageous".

"Not so easy with that atmosphere," a separate fan also noted, as City boss Pep Guardiola's reaction to the consolation goal also went viral.

"Unbelievable. If this man doesn’t win the Ballon D’Or then the world has gone mad," someone else stated.

To that effect, several big name Twitter accounts made demands such as "Give it to him now" in relation to football's highest individual accolade currently owned by former FC Barcelona rival Lionel Messi, now at Paris Saint Germain.

Give it to Karim Benzema now ???? pic.twitter.com/vPmbqUKU6i

Unbelievable. If this man doesn’t win the Balon D’Or then the world has gone mad.

Showing no signs of slowing down at the age of 34, it is hard to argue that Benzema doesn't finally deserve recognition from France Football's panel of journalists who decide where the prestigious gong ends up.

Last night, Benzema not only showed the same leadership that saw him score two comeback hat tricks in the last 32 and quarter-finals to dump PSG and Chelsea out of the competition. He also shattered records.

Through his brace, he became the first Real Madrid player to score 40 goals in a season since Ronaldo and is also the first player with eight goals in a single UCL knockout phase since CR7 achieved the feat in the 2016-2017 season where Los Blancos went on to win the big-eared trophy against Juventus.

As things stand, only Ronaldo (13) has netted more goals in the semifinals of the Champions League in his career overall, with Benzema's seven tally surpassing Messi's six.

Taking to Twitter on Wednesday morning, Benzema laid down the gauntlet for the next 90 minutes against City where two unanswered goals from the La Liga giants would see them reach their first UCL final since 2018.

"The game has only just begun," Benzema tweeted. "We are Real Madrid."