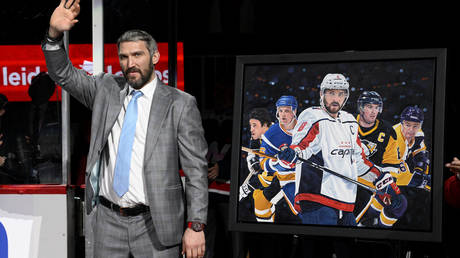 Alexander Ovechkin's record-breaking season in the NHL was marked by his team, the Washington Capitals, ahead of their final home game of the season on Tuesday evening.

Ovechkin, 36, became the oldest player to score 50 goals in a season last week - the ninth such time that the Russian star has reached the 50-goal milestone in his career in the United States - and stands in third place in the all-time rankings of NHL scorers as he continues to pursue the record of the legendary Wayne Gretzky.

His accomplishment was duly recognized by the Capitals ahead of their meeting with the New York Islanders as Ovechkin took to the ice alongside Capitals owner Ted Leonsis to take in a standing ovation from the fans packed into the Capital One Arena.

Ovi is out tonight but he was all smiles during the pregame ceremony. @WDVMTV @WDVMSports pic.twitter.com/1BstFgExQa

It might well have been a bittersweet evening for Ovechkin, however. He missed the game with the Islanders due to an injury sustained in a recent game with Toronto - just the 25th game he has been absent from due to injury in his 17-year career.

This has sparked fears that the Russian might be an injury absentee from the Capitals' playoff run. Ovechkin has never missed a playoff game up to this point.

He is listed as 'day-to-day' due to a upper-body injury which he sustained when he tripped over Toronto goaltender Erik Kallgren's stick and appeared to land heavily on his shoulder.

He remained prone on the ice for several seconds before skating to the sidelines. He didn't return to the game.

Capitals coach Peter Laviolette, though, remains somewhat upbeat about Ovechkin's chances of being fit for the post-season.

“It depends on how things progress with him, so it’s day to day right now.”