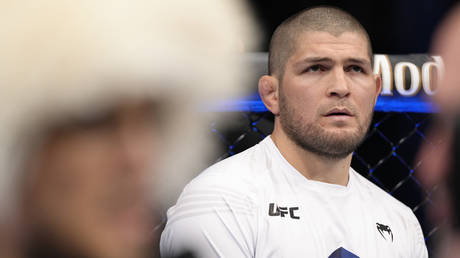 Octagon legend Georges St-Pierre has admitted that he could be tempted out of retirement for a one-off showdown with fellow icon Khabib Nurmagomedov – but only if the circumstances are right.

Former two-division champion St-Pierre retired from mixed martial arts just weeks after he ended a four-year exile from the sport by returning to the UFC to claim the middleweight championship from former champ Michael Bisping in New York City in 2017.

For some time afterwards, though, the Canadian icon was continually linked to a super-fight showdown with another dominant champion in Khabib Nurmagomedov – something which St-Pierre ultimately shot down.

Khabib's own retirement in 2020 appeared to hammer the final nail in the coffin of any potential fight between the two – but St-Pierre, who is now taking on new challenges on the silver screen, has admitted that he could possibly convinced to battle Khabib in a grappling match.

“I don't know, I mean... Listen, if it's well-organized... If there is some event that [is] well-organized [and] it is a novelty fight, something good, maybe. Why not?” St-Pierre said in an interview with MMA reporter James Lynch.

“I'm still in the entertainment world. I'm in great shape, I train still like a professional athlete. I still get it, you know what I mean? Even some of the guys, they [ask] me 'are you preparing a comeback?'

But if that is GSP on board, it seems as though Khabib would still require some convincing.

The Russian ace retired from the cage with a perfect record of 29-0 but despite UFC boss Dana White's repeated attempts, he couldn't be compelled back for one more fight in pursuit of an eye-catching 30-0 career ledger.

And according to Khabib himself, GSP was one of the names offered to him.

“[Dana White] sent me a message and said, ‘Hey, Georges St-Pierre wants to fight with you.’” Khabib said last year.

“He’s 40 years old and I don’t understand why he has to fight. I think he has money, too. I’m finished. I’m really finished.”

Khabib, who now focusses his attention on building his Eagle FC fight promotion, is just 33 years old - meaning that he can probably expect to be the subject of comeback rumors for the next six or seven years.

It will remain to be seen if he ever takes up the offer – but if he doesn't, it won't be for a lack of trying from Dana White and combat sports legends like Georges St-Pierre.

US surpasses China as India’s biggest trading partner in FY22 at $119.42 bn