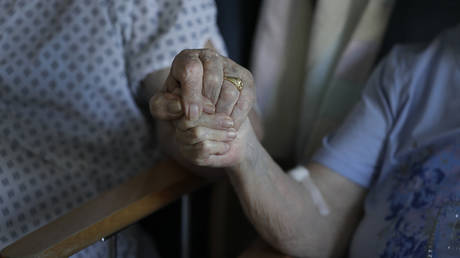 British authorities disregarded the risk of placing elderly patients in care homes, according to the judges

British health authorities violated the law by overlooking the risk of placing untested elderly patients into care homes in the first months of the Covid-19 pandemic, the High Court ruled on Wednesday.

Two women - Cathy Gardner and Fay Harris, who lost their fathers to the virus in early 2020 – sued the then-Health Secretary Matt Hancock and Public Health England over how the initial outbreak of Covid-19 had been handled.

Despite rejecting their other claims, the judges sided with the complainants, who questioned the government’s directives on the use of care homes at the start of the outbreak in the UK.

Last month, the lawyer who represents Gardner and Harris said that those orders had contributed to the death of some 20,000 patients in England and Wales between March and June 2020. “Put together, the various policies were a recipe for disaster and disaster is what happened,” he explained.

In their ruling on Wednesday, Lord Justice Bean and Mr Justice Garnham concluded that the documents issued by the health authorities in March and early April 2020 were unlawful and “irrational” for having failed to take into account the danger of non-symptomatic transmission of the virus to elderly and vulnerable people.

There was already “growing awareness” about the possibility of asymptomatic transmission of the coronavirus at that time, but there was no evidence of Hancock addressing such risks when it came to the wards of care homes in any way, according to the judges.

The government could’ve told asymptomatic patients to quarantine for 14 days to avoid further spread of the virus, they pointed out.

But this wasn’t done as the “drafters of the documents of March 17 and April 2 simply failed to take into account the highly relevant consideration of the risk to elderly and vulnerable residents from asymptomatic transmission,” the ruling read.

The judges said that the health authorities only addressed the issue of non-symptomatic transmission mid-April 2020.

Hancock's spokesman reacted to the ruling by saying that the then-health secretary had acted reasonably, but Public Health England had “failed to tell ministers what they knew about asymptomatic transmission" of the coronavirus.

“Mr Hancock has frequently stated how he wished this had been brought to his attention earlier,” the spokesman insisted.

Hancock resigned as health secretary in June 2021, following a scandal that saw him caught kissing an aide in his Whitehall office in violation of social distancing rules.

Speaking outside the court, Fay Harris called for prime minister Boris Johnson to resign over his government's "reckless and unlawful" policies.

"Their actions exposed many vulnerable people to a greater risk of death - and many thousands did die," the complainant claimed, also blaming the UK authorities of dishonesty and refusing to own their mistakes.

Is Secret Wars the next big Avengers crossover movie?