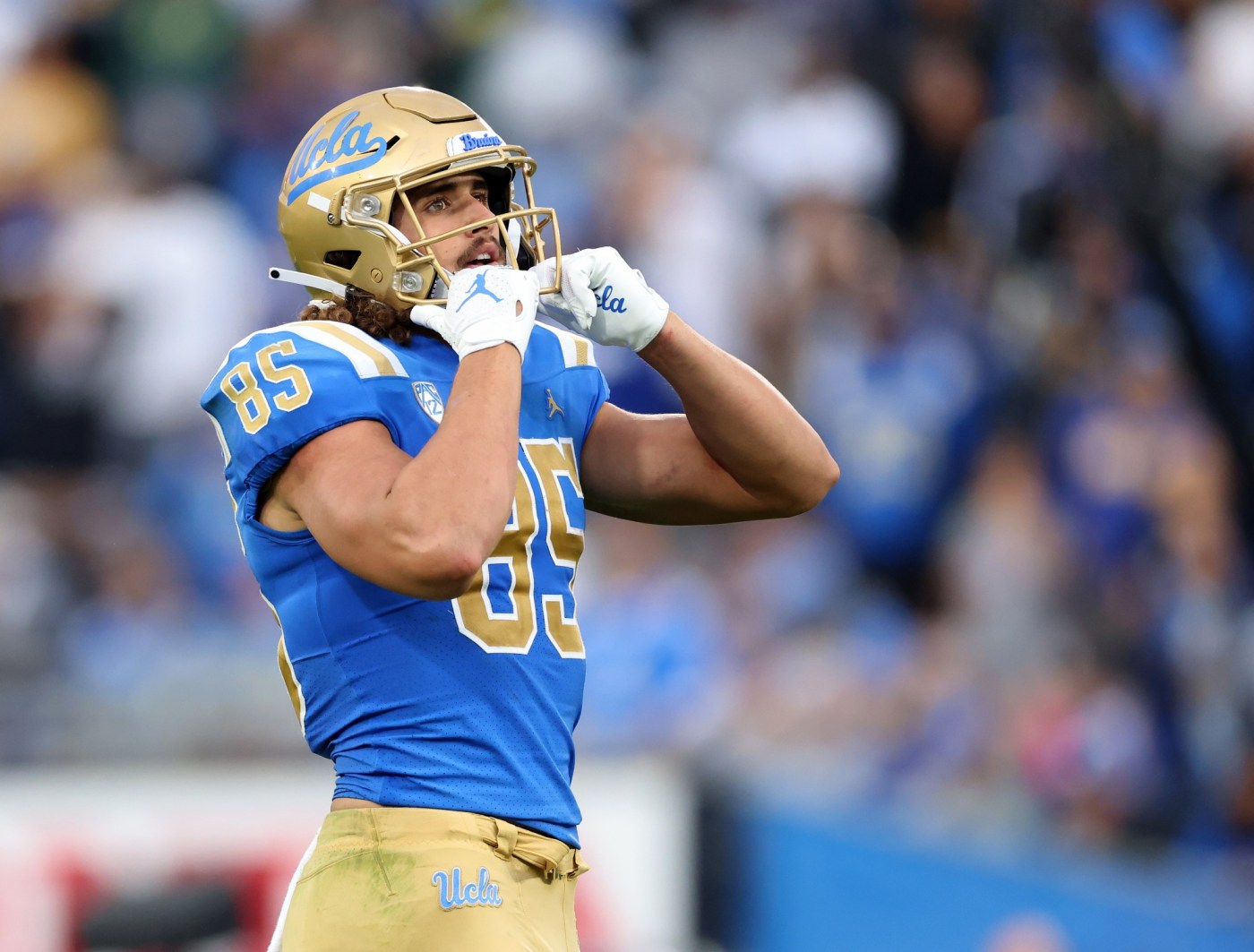 It was the signature play of Dulcich’s time at UCLA in one of the Bruins’ biggest wins of 2021. LSU bit hard on the perfectly designed play action and Dorian Thompson-Robinson threw a strike in the middle of the field to a wide-open Dulcich.

The St. Francis High grad juked past a defender along the sideline and eluded two more at the goal line for a highlight-reel touchdown that most tight ends only dream of finishing, with the Rose Bowl erupting.

“I got a lot of open field,” Dulcich said on NFL Network last week. “That’s what I do.”

That play exemplifies why Dulcich is expected to be one of the first tight ends chosen in the NFL draft, which begins Thursday in Las Vegas. Dulcich’s solid hands, deceptively quick speed and ability to add yards after the catch has his draft stock in good position. Most mock drafts have either Dulcich or Colorado State’s Trey McBride atop the list of tight ends, with Dulcich likely slotted to be selected in the second or third round.

Three years ago, it was unclear if Dulcich even had a future at UCLA, much less the NFL.

The Glendale native was a walk-on, redshirted his freshman year and barely played his first two seasons, mostly appearing on special teams and as a reserve wide receiver.

Dulcich weighed just 210 pounds at the time, and with established tight ends like Caleb Wilson and Devin Asiasi ahead of Dulcich on the depth chart, he figured receiver would be the best position to get playing time. After Asiasi turned pro in 2020, Dulcich put on some pounds and made the switch to tight end in his third year, quickly establishing himself as one of the team’s top offensive weapons.

Dulcich said at his Pro Day at UCLA last month that his story as a walk-on has been a point of discussion when he meets with NFL teams.

“A lot of teams appreciate that work ethic and it gets a lot more buzz around me, which is cool,” Dulcich said.

Dulcich’s rise on the depth chart at UCLA earned the respect of his teammates, especially his fellow tight ends.

“Greg Dulcich, he was a great inspiration,” Bruins fifth-year tight end Michael Ezeike said. “He set the tight end standard for each and every one of us.”

Playing in a pro-style offense and under a former NFL coach in Chip Kelly helped Dulcich in interviews with teams.

“They’re impressed by how well I know our whole offense,” Dulcich said during his Pro Day last month. “It’s pretty pro-style look, the things that we run and you talk to teams like, ‘You wouldn’t imagine how many guys we talk to and they just don’t really have as good of a grasp as you guys.’” And that’s a credit to Coach Kelly.”

Dulcich’s versatility could also endear him to teams looking for a tight end who can do more than catch and block. Dulcich told CBS Sports HQ before the draft combine last month that Kelly jokingly asked Dulcich to change his position on the roster to SAK – or Swiss Army Knife.

“That was what was cool about what we did at UCLA as tight ends. We were asked to wear a lot of hats,” Dulcich said. “I was in the wing, I was a true tight end, split out, played fullback even a little bit, which was a lot of fun. Teams definitely appreciate that, and that’s what I’m all about: doing it all.”

Most scouting reports note blocking as Dulcich’s biggest weakness, specifically technique and hand placement – with a caveat that Dulcich has been playing full-time as a tight end for only two years.

Dulcich, who has met with three-quarters of teams since his Pro Day, said last month that he doesn’t look at mock drafts and would be happy to play on any NFL team. But he has noted that he models himself after San Francisco 49ers tight end George Kittle, calling him the “cream of the crop” and adding that “it would be awesome” to play with for 49ers given the similarities in playcalling.

No matter where Dulcich lands, he will have a strong chance to continue his inspirational journey in the NFL.

“It’s been a lot of fun,” Dulcich said on NFL Network. “It’s been exciting. When you take a step back and appreciate the process for what it is, it’s been really awesome.

Today24.pro
State schedule for area high school teams #1 Backyard Weed That Can Replace ALL Your Medications Love Island villa in Majorca takes shape with huge pool and firepit spotted ahead of show launch The ONLY 3 Upper Body Exercises You Need for Mass