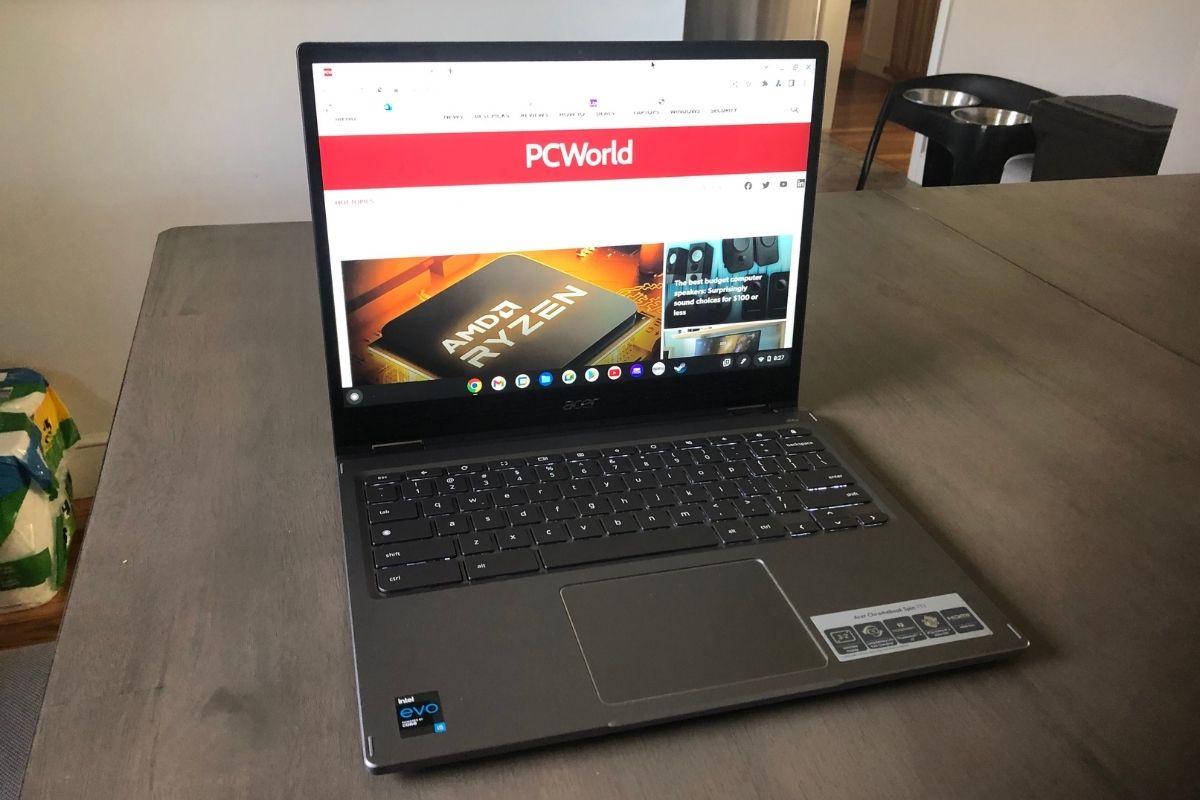 The Acer Chromebook Spin 713 is a reasonably priced workhorse for the everyday person.

If you’re looking for a convertible laptop that you can do some serious work on, the Acer Chromebook Spin 713 is a fantastic option. First of all, the pixel-packed 2256x1504p touch display is phenomenal. Colors are both vibrant and rich, which makes it great for watching movies or television shows on. The build quality is also rock solid and there are plenty of ports, along with all day battery life (and then some). That said, the $699 Spin 713 has a rather utilitarian design and there’s no privacy shutter on the webcam.

If you can live with those nitpicks, don’t need the full-fledged application support of Windows (this is a web-centric Chromebook), and you value function above all else, read on to learn more.

The Acer Chromebook Spin 713 comes with either an Intel i3 or Intel i5. Our review unit has an Intel Core i5-1135G7 and Intel Iris X graphics. It’s also packing 8GB of RAM and 256GB of PCIe SSD storage. The touch-enabled 13.5-inch display has a resolution of 2256-by-1504. For further information like the weight and ports, check out the specs below.

The design is nice and clean, but a little on the boring side. The dark grey chassis is rather utilitarian, so it won’t be turning heads. The silver keyboard gives off rather minimalist vibes, which I like. That said, I don’t mind the subtle design. What really matters to me is the build quality. If a laptop is shoddily built, then what does a swanky design even matter? Fortunately, the Spin 713 is indeed quite rugged and well-made.

When I flipped the Spin’s display around to use it like a tablet, the two hinges felt secure and tight. In laptop and tent mode, there was next to zero wobbling. As for the keyboard, I didn’t notice much flex. Overall, this is a sturdy-feeling laptop thanks to the aluminum chassis. I’m confident it can handle the occasional bump or two, especially when being carried around in a backpack. At the end of the day, a good Chromebook is one that’ll last you a while. The Spin is meant to be functional, not swanky.

My only issue with this Chromebook is that it’s on the heavier side at 3.02 lbs. The weight isn’t backbreaking, by any means. It’s a far cry from a bulky gaming laptop, which often tips the scales at five or six pounds. Besides, the two to three pounds range is considered lightweight and portable for laptops. That said, I wish it were just a pound or even a half pound lighter. I found that my shoulder got a little sore after spending some time toting it from room to room. Maybe I need to lift more weights and work on my arm strength.

The keyboard is an absolute joy to use. Although I have a personal preference for Lenovo ThinkPad keyboards, I really didn’t mind the Spin’s. I got accustomed to the layout faster than I had anticipated. The backlighting is bright enough for me to see each individual letter, number, or special character, and the keys have a snappy feel to them. As for the touchpad, it’s a wide square-shape that allows me to glide my fingers smoothly. Clicking only requires just a slight bit of pressure. I’d say it’s one of the nicer keyboards and trackpads I’ve used on a Chromebook.

The real star of the show is the 2256-by-1504 panel. It’s probably the best display I’ve ever seen on a Chromebook and that’s not hyperbole. Colors are vibrant and text and other smaller details are super crisp. When I watched the trailer for the new Obi Wan television show, the beige hues of the sand dunes were bright and the details on the Jedi’s futuristic binoculars were quite sharp. The viewing angle is nice, too. According to Acer, the viewing angle is 170-degrees. This makes the display easier to see from the sides. The touchscreen is a nice added bonus as well.

Speaking of the touchscreen, it’s responsive and works perfectly well enough with a finger or two. I was able to swipe and tap to my heart’s content. The only thing that bums me out is that there’s no stylus. I find it kind of strange, especially for a 2-in-1 laptop. It’s not a huge deal, but it’s always nice to have the option, especially if you’re looking to doodle or mark up a document. Buying a separate stylus just adds to the overall cost, too. If you absolutely need a stylus, you can pick up one that’s compatible for about $50 a pop.

My only issue with the display is how reflective it is. It’s fine to use indoors, but you probably don’t want to use this laptop outside in direct sunlight. That said, the reflection is due to the glossy finish. That’s not super uncommon. Let’s dive into some of the other aspects like the webcam and audio.

The 720p webcam is less-than-impressive, but that’s not terribly surprising given the specs. Images are grainy and chock-full of static, and videos are much the same. I work from home and often virtually meet up with my coworkers over Zoom or Teams, so having a clear picture is majorly important to me. There’s also no privacy shutter, which is a big knock for me personally, as I prefer a bit more security. Call me paranoid but I’d rather my colleagues not accidentally catch me lying on the floor with my greyhound talking to her in a baby voice.

The audio is surprisingly punchy. When I listened to a full-fledged orchestra play Sailor Moon music on YouTube (it’s so lovely), I was surprised by both the crystal clear highs and lows. It’s plenty loud, especially if you’re close to the laptop, but I wouldn’t expect the Spin to fill a large room with sound. Typically, if I listen to anything, I tend to use my personal pair of headphones.

I’m quite pleased with the port selection, as it’s really diverse. On the left side of the laptop, you’ll find two USB Type-C ports, an HDMI video output, and the audio jack. The right side features a USB 3.2 Type-A port, a micro SD card slot, the power button, and the volume rocker. The Spin also supports Thunderbolt 4, which is great for speedy data transfers and power delivery. If I don’t have to tote an adapter around, then I’m happy.

The Chromebook Spin 713 is downright zippy, with its powerful Core i5 CPU offering significantly higher performance than the legions of cheap Chromebooks with modest Arm processors inside. When I booted up Final Fantasy V, the game loaded up quickly and ran fine with zero stutter. It’s an older game, however, so it doesn’t require much power from the laptop. As for everyday tasks like surfing the web and watching Netflix, the laptop flew right through those with no problem. The Spin easily handled 20 open tabs as well. My only nitpick is that the fans get a bit loud under heavier loads. It’s a little annoying, especially if I’m trying to watch a video, but it’s not a huge deal. For benchmark scores, check out the bulleted list below.

The battery life is pretty darn good, if I do say so myself. When I ran CrXPRT 2’s battery benchmark, which cycles through videos and various tasks until the laptop dies, the Spin lasted almost 14 hours. I had set the brightness closer to 200 nits for this particular test. This Chromebook will get you through a full workday and then some. Outlet hunting? You can kiss those days goodbye. As for real world use with the brightness turned up a bit, the laptop breathed its last breath around the 10 hour mark. That’s still a good result.

If you’re looking for a moderately powerful machine to do work on, the Acer Chromebook Spin 713 is a good fit, assuming you don’t need the full application support Windows 11 offers. It has one of the nicest screens I’ve seen on a Chromebook, and the build is strong and robust and feels like it’ll last a while. Plus, the keyboard and trackpad are a joy to use. As for what’s going on under the hood, it’s surprisingly powerful. You expect peppy performance. So long as you don’t mind that it’s a bit on the heavier side and that it doesn’t come with a stylus included, then this is a solid option.