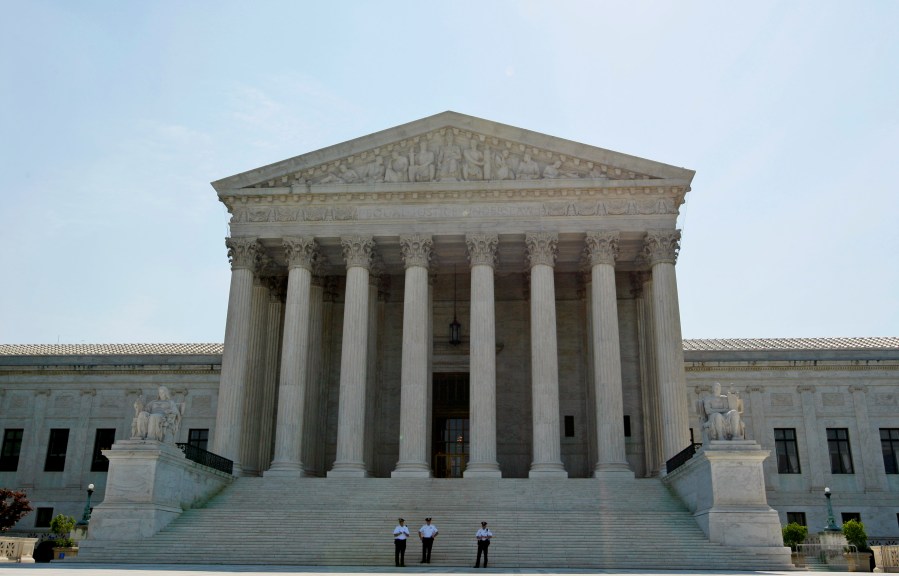 The court agreed earlier this year to consider limiting its 2020 McGirt decision, a ruling that the state says has produced chaos in its courts.

The state’s appeal is in the case of Victor Castro-Huerta, who was charged with malnourishment of his 5-year-old stepdaughter and has since pleaded guilty to a federal child neglect charge and is awaiting sentencing.

He was initially convicted in state court but that conviction and his sentence were overturned because of the way the state courts interpreted the law in the aftermath of the McGirt ruling. The state appealed with the strong support of Republican Gov. Kevin Stitt and is the latest strain on his relationship with tribal leaders in the state.

In the 2020 case, the Supreme Court ruled that a large chunk of eastern Oklahoma remains an American Indian reservation. The ruling applied to the Muscogee reservation, but led to similar lower court rulings upholding the historic reservations of several other Native American tribes in Oklahoma, including the Cherokee, Chickasaw, Choctaw, Quapaw and Seminole nations that cover nearly the entire eastern half of the state.

The decision, written by Justice Neil Gorsuch, meant that Oklahoma prosecutors lack the authority to pursue criminal cases against American Indian defendants in parts of Oklahoma that include most of Tulsa, the state’s second-largest city with a population of about 413,000.

US Supreme Court reaffirms that McGirt is not retroactive, rejects Oklahoma’s request to overturn ruling

Stitt said during his State of the State speech in February that “Oklahoma has been robbed of the authority to prosecute crimes.”

The Supreme Court does not typically reconsider its decisions so soon. But the state argued that crimes are going uninvestigated and unprosecuted because federal authorities — who can bring criminal cases on tribal land — are overwhelmed.

“The state will argue that it has the right to protect Indian victims in front of the Supreme Court this week” his spokesperson, Carly Atchison said.

Principal Chief Chuck Hoskin Jr. of the Cherokee Nation, the state's most populous tribe with about 261,000 citizens, believes Stitt is trying to take away tribal sovereignty after the Supreme Court in January rejected the state's request to overturn McGirt.

“I think his goal now is to whittle away at McGirt,” Hoskin said, calling it a 19th century mindset toward the treatment of Native Americans.

"It’s put a strain on our relationship ... I would like to think it’s a lack of education rather than a lack of understanding” of treaties between two sovereign governments, the United States and the Choctaw Nation, Batton said.

“It’s becoming harder and harder the more he’s not accepting history and what the United States agreed to do and who we are as a Choctaw Nation," Batton said.

The Inter-Tribal Council of the Five Civilized Tribes, made up of leaders of the Cherokee, Chickasaw, Choctaw, Muscogee and Seminole nations last fall rescinded a 2019 resolution commending and congratulating Stitt, a member of the Cherokee Nation, on his election as governor.

Stitt and tribal leaders previously clashed over Stitt’s desire to renegotiate tribal gambling compacts that he claimed were expiring. Federal and state courts ruled against Stitt in lawsuits over the gambling question.

Last year, Stitt decided to not renew hunting and fishing license compacts with the Cherokee and Choctaw nations as part of an ongoing dispute between the tribes and the Republican governor.

Stitt has lost support among Native American voters due to his actions, according to Hoskin.

“He absolutely has, in my opinion he’s the most anti-Native American governor in state history,” Hoskin said. “I think his defeat (for reelection) would be met with applause by many tribal leaders, certainly by me.”

Donelle Harder, manager of Stitt's reelection campaign said Stitt has had disagreements “with a small number of top officials of the tribes," but has good relations with tribal citizens he meets during his travels in the state.

“I think every Oklahoman knows this is a critical conversation that must be had and no one group or organization should dictate the future of all 4 million Oklahomans,” Harder said.

"Today, the State of Oklahoma asked the U.S. Supreme Court to confirm that the State has the authority to prosecute non-Indians who commit crimes against Indians in eastern Oklahoma, which is now the expanded Indian country under the McGirt decision. The State has been prosecuting such criminals since 1907.

The federal government is leaving thousands of tribal victims of crime in eastern Oklahoma without justice, and as many criminals unprosecuted and free to victimize others around the State. This has dramatically damaged public safety in eastern Oklahoma.

Clearly, a win for Oklahoma in this case is a win for these Native American victims.

No matter the outcome, I will continue to reach out to the leaders of the Indian nations to engage in constructive conversations seeking resolutions that will benefit all Oklahomans.

I want to thank our outside counsel Kannon Shanmugam, Oklahoma Solicitor General Mithun Mansinghani, and the entire team of attorneys representing Oklahoma for their countless hours of preparation and hard work. I am grateful for the support of Oklahoma sheriffs, chiefs of police, district attorneys, the City of Tulsa, business groups like the Farm Bureau, Cattlemen’s Association, and Petroleum Alliance, and states like Texas, Kansas, Nebraska, Louisiana, and Virginia, all of whom filed briefs in support of State criminal jurisdiction in eastern Oklahoma.”

“Today’s Supreme Court arguments reaffirmed what tribes have said all along: the state of Oklahoma has neither the facts nor the law on its side. The Justices heard clear arguments that explain how the state’s demand to undermine tribal sovereignty is inconsistent with legal precedent, the intent of Congress, and the basics of Indian law.”

“Congress has been clear on the limits of state jurisdiction on our reservations, and Governor Stitt’s anti-tribal views don’t change those facts. While tribes have worked closely with our partners to meet our public safety responsibilities and provide a blanket of protection to everyone on our reservation, it’s unfortunate that the state has wasted time and resources attacking our rights and sovereignty. We hope that the Justices rule on the side of collaboration and the law, and that the governor finally chooses to join us in meeting our shared public safety goals.”

[Just Saying] Should we give the benefit of the doubt to Marcos Jr. as incoming President?