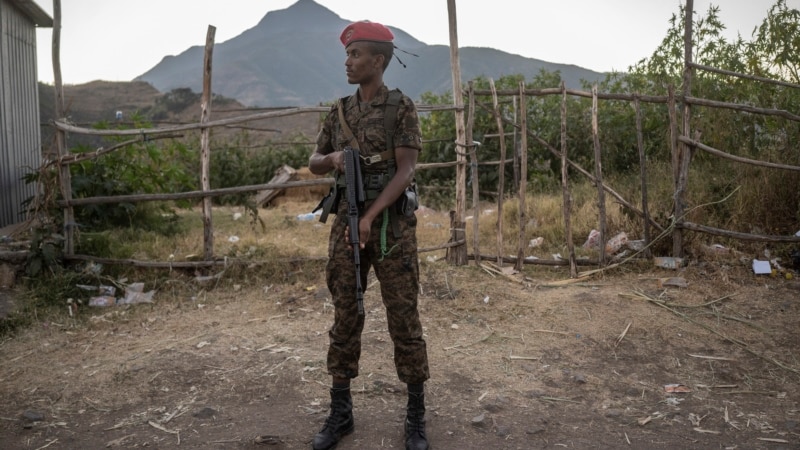 A British environmental group warns the war in Ethiopia's Tigray region is driving deforestation. It says blockades limiting fuel and aid to the region have forced Tigrayans to chop down trees, worsening food shortages in a region the U.N. says is already at risk of famine. Tigray has been under a de facto humanitarian blockade for more than nine months now, with Ethiopian government forces and rebels accusing each other of preventing aid from reaching the war-torn region. The U.N. says one of the worst humanitarian crises in the world is taking place inside Tigray, with an acute lack of food. Ordinary Tigrayans are said to be desperate to find resources for day-to-day living.  A report by the U.K.-based nonprofit group the Conflict and Environment Observatory says the war and lack of aid in Tigray is having a serious impact on the environment that could cause problems for Tigrayans for decades. By analyzing satellite images in Tigray, the report concludes “conflict driven-deforestation" is happening at an alarming rate. Trees play a major role in conserving soil and water to produce food. Aid agencies have warned that parts of Tigray are already close to famine. Henrike Schulte, the author of the report and a conservation scientist at the Zoological Society of London, said conflict-driven deforestation usually happens for two reasons. “One is the breakdown of environmental governance," she said. "For instance, if in a war zone, protected areas are no longer protected and people can move in and remove vegetation… deforestation can also occur because of increased demand for foreign resources.” Raphael Edou, the Africa program manager at The Environmental Investigation Agency, a Washington-based non-profit group, said rebel groups in Africa frequently turn to logging as a source of funding. “Conflicts and deforestation represent one of the great threats to social development in Africa," he said. "Illegal logging is one of the ways to get quickly, money. As the forest has become the source for rebels to buy weapons. They always cut the trees from the forest.” Edou added that anywhere there is a conflict, very high rates of deforestation emerge too. In recent years there has been a successful effort to rebuild forests in Tigray to assist development and the economy, as well as food security. The report says the effort is now facing a setback. However, the people in Tigray may be more concerned about survival in the short term.  The U.N. says 9.4 million people in the north of Ethiopia, including Tigray and parts of the neighboring Afar and Amhara regions, require humanitarian aid. Schulte said that the best way to stop the deforestation is to stop the conflict, but even then, the environmental damage will take decades to undo.

MI5 spy ‘attacked girlfriend with machete and made her watch executions’